The Honda Civic has always been a more interesting choice for buyers in the Focus-sized family hatchback segment, hence this hatchback's loyal following. Conquest customers though, have often been harder for this Japanese maker to attract, hence the package of updates that was made to in 2015 to a ninth generation Civic model that as a result became smarter, cleverer, safer and more comfortable. It meant that this under-rated contender is able to represent a very good used car buy in its segment, especially when matched to peppy but frugal 1.6-litre diesel power. It's a surprising package for the right kind of customer.

The Honda Civic. It's a family hatchback that's always been frustratingly close to greatness, especially perhaps, in its ninth generation guise, which was significantly updated in the form we're going to look at here. Cars of this kind were always closest to the heart of company founder Soichiro Honda. Back in the Sixties when the best the motor industry could offer a small family was something like a lumbering Morris Oxford, it was he who pioneered the idea of a compact fuel and space-efficient family car with a hi-tech air-cooled flat-four 1300cc engine. It was thinking that led to the launch of the original Civic in 1972, a model series that over the next forty years would go on to sell over 20 million cars around the world, over 650,000 of them in the UK. Throughout those decades, there were so many things that made motoring enthusiasts want to like this model line: its unique styling, its wonderfully slick gearbox, its sporty engines, its clever 'magic seating' practicality and its unique driver-centric dash. And, sure enough, all of these things were present and correct when the MK9 Civic model first appeared in 2011. But then came the 'if onlys'. If only the ride, refinement, cabin quality and running costs had been better. If only the lifeless power steering hadn't disguised the responsive handling. If only the pricing had been a bit more competitive. You can't afford 'if onlys' the way the Focus-class segment is at present and Honda knew it had to do better. So, in 2014 the fightback began, first with tweaks to the suspension and power steering that significantly improved the on-the-road experience. Then with the addition to the range of a class leadingly-spacious Tourer estate version. Next up was the announcement of a fearsomely potent Type-R hot hatch variant. And finally, in the Spring of 2015, we got a complete refreshment for the mainstream range, with smarter styling, extra safety kit, a new infotainment system, more equipment and lower pricing. That's the car we're going to look at here as a potential used buy. It sold until the MK10 Civic model was launched in early 2017.

Not a lot goes wrong with the ninth-generation Civic. Buyers are, on the whole, a contented lot if customer satisfaction surveys are anything to go by. However, we did come across a few issues. One owner complained of problems with the stop/start system. And several others reported a baulky gearshift from 2nd to 3rd. In one car, the centre dash display screen stopped working. And in another, there were Bluetooth connectivity issues. One buyer said there was a rattle from the high-mounted rear stop light too. A few customers reckoned that the paintwork scratched easily as well.

'Kaizen', the Japanese approach to 'continuous improvement', characterises every aspect of this much improved ninth generation Civic. This car may look similar to the MK9 model we first saw in 2011 but under the skin, it's a far more competitive prospect. The upgraded infotainment set-up, the more comfortable driving experience and the wider range of trim options, plus the availability of an estate bodystyle and a Type-R hot hatch variant - all of it makes a big difference to this car's appeal. All of these things are welcome, but they didn't dilute the individual appeal of a package that remains distinctively different in its era in the Focus-sized family hatchback segment. The sporty feel of the engines, the brilliant 'Magic Seat' practicality of the cabin and the distinctive looks all continue to underline the way that Honda isn't afraid to go against the grain when designing a car of this kind. 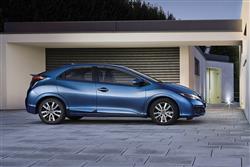 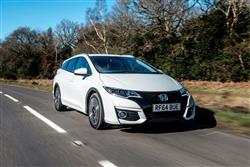 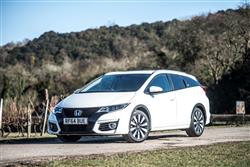 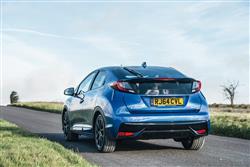 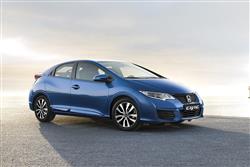