In 2015, Honda's fourth generation CR-V evolved into something cleverer, classier and much more efficient. Targeting family Crossover models as well as small lifestyle-orientated SUVs, it's a strong package if you're looking at petrol power or an entry-level 2WD diesel. What changed with the post-2015-era facelift though was that buyers got the option of hi-tech automatic transmission and the more sophisticated pairing of high performance diesel power and 4WD. In other words, in this guise, the CR-V sharpened-up its act. As a result, it's a hard car not to like as a used buy.

How do you right a best seller? Back in 2015, this was Honda's answer to that question when it came to the fourth generation version of their CR-V, the company's mid-sized SUV model, a car that has frequently been the strongest selling model of its kind in the world. By 2015, it had already found over five million global buyers over two decades in over 160 countries, with over 750,000 examples sold in Europe since an original launch in 1997. This updated design wasn't radically different from the original MK4 version we first saw towards the end of 2012, but the changes Honda made to it were nonetheless significant - as was necessary in a segment that by the time of this model's launch was saturated with clever rivals. So customers were brought a smarter shape, a classier cabin, more efficient engines, stronger safety and extra hi-tech equipment. At the time of this revised MK4 model's introduction though, the headache for Honda was that all of its obvious competitors in this sector had recently launched rival models claiming much the same. Which perhaps explains why this isn't a car that jumps out at you from the spec sheet. No. You have to drive it. Use it. Fill it with family. Many of those experienced in doing just that probably won't even look at the alternatives before replacing their second, third or early fourth generation CR-Vs with this improved MK4 model. It does, after all, offer a depth of engineering that some other rivals just don't have - though there's some difficulty in determining just which kinds of cars these are. Mid-sized soft roading SUVs like Toyota's RAV4 are an obvious target, but when this car was new. Honda also believed that lower-order CR-Vs would appeal to buyers looking at slightly more affordable Qashqai-class Crossover models. And hoped that plusher versions of this car would even attract folk who might be looking at a pricier premium mid-sized SUV with a prestigious badge on the bonnet. In all these objectives, the brand's cause was helped by the introduction of Honda's award-winning 120PS 1.6-litre i-DTEC diesel engine, also available in pokier 160PS guise to drive 4x4 diesel models and interest folk shopping at the premium end of the spectrum. Honda also targeted these kinds of people with a higher-tech 9-speed automatic gearbox option and a much smarter cabin. This facelifted MK4 model CR-V sold until mid-2017, when an all-new MK5 CR-V model range was announced.

This facelifted MK4 model has a very CR-V-style look and feel but has a front end that adopts a more dynamic, planted stance than earlier models, changes over the original fourth generation design including redesigned headlamps flanked by LED daytime running lights flowing into a smarter grille. As usual with this model line, it's very practical inside. Pull a little fabric handle on the seat base (or either of the cargo sidewall levers in the luggage bay) and the seat base tumbles forward, the seat back dips down and the rear headrest tucks in snugly. This has to be one of the cleverest seat-folding mechanisms around from SUVs in this era, a lovely piece of engineering that leaves the seats folded completely flat - the kind of thing you'd find useful day in, day out. So this car's easy to live with - and comfortable to drive too. We particularly like the way that the gear stick is located just a few inches from the steering wheel for snickety-quick changes. The key change though with this revised MK4 model lay with the addition of a larger 7-inch 'Honda CONNECT' colour infotainment touchscreen. Provided you avoid entry-level trimmed variants, you'll find that this Android-based set-up is standard across the range, controlling stereo and informational functions, dealing with the optional Garmin sat nav system and providing full internet browsing when you're stationary.

A number of things came out of our CR-V ownership survey. Transmission problems were reported by some; electrical issues by others. Check both these things out on your test drive. We came across a report of a groaning noise from the rear differential heard while going through turns - caused by differential fluid break down. Worn door lock tumblers can cause the door lock to be sticky - or not work at all. In one instance, the gear knob fell off. In another, the car had a tendency to stall during gear changes. One owner found green lines appearing in the digital dash display when the vehicle was parking in very cold conditions. Honda's CR-V has racked up an impressive reliability record. Very few of these vehicles will have been driven off-road but there may be a few rogue examples out there. To be sure, check the underside of the car for knocks and scrapes. Make sure there's life in the clutch and that the tyres are in good condition and check for tired front dampers on diesels. The interiors look to have proven tough thus far. Honda's reliability record looks set to carry on being a target that many other car manufacturers benchmark. It's possible that the vehicle you're looking at may have been used for towing, which could have put extra strain on the clutch. If the car you're considering has a tow-bar fitted and it looks to have been used, make sure you check how the clutch engages during your test drive, as replacing the clutch and flywheel can get very expensive.

With this facelifted fourth generation CR-V, i-DTEC power is developed from a smaller, more efficient 1.6-litre engine. You get it with 160PS mated exclusively with 4WD. Or with 120PS mated exclusively with 2WD. The pokier unit has the best power-to-consumption ratio in its segment from this era and is the only engine in the range that gives you the option of the other key development added into this improved MK4 model, Honda's nine-speed auto transmission. We should also point out that in this guise, the CR-V range continued to offer buyers a petrol option. The engine in question is the same 155PS 2.0 i-VTEC unit used in the original version of this model and, like the majority of Honda petrol powerplants, responds best if you put a few revs on the board. As with previous CR-V models, the 4x4 set-up in this one favours is what the brand calls a 'Real Time AWD system': in other words, it's one of those arrangements that sends drive to the front wheels nearly all the time, pushing torque rearwards only when a loss of traction is detected. In that situation, there's no need to mess about with extra gear levers or buttons: everything's done for you. Of far more relevance though is the way this car drives on ordinary everyday tarmac, capability Honda tried hard to sharpen up with this revised model. The result is a machine beautifully fit for purpose.

It's easy to imagine yourself as target market for a car like this CR-V. You've a couple of kids, an active lifestyle, a need to haul things around and an aversion to rather dull large estate cars. The thing is though, you've also an aversion to the kind of RAV4-style mid-sized SUV soft roaders that such a mind set would normally direct you towards. Understandably perhaps, you think they're all rather pretentious and silly. But this car isn't, an SUV for.. people who really don't like SUVs. A car for people who look at what a vehicle can do for them rather than what it says about them. End use you see, has been the over-riding design parameter here, not cutting edge styling, clever gadgetry, irrelevant pin-sharp handling or pointlessly powerful engines. As a result, it's an extremely easy thing to live with, the kind of car you'll own, then wonder how you managed without. That may not be a recipe for media headlines but it's an approach that other brands could certainly learn from, explaining why so many CR-Vs are bought by folk who previously owned one. These are people who'll heartily approve of the changes that Honda made to this improved fourth generation version - the smarter looks, extra connectivity, classier feel and, most importantly, the much more efficient way it lets you enjoy diesel power with 4WD. All of these allowed this CR-V to reach out beyond its traditional customer base - and make it a good used buy today. In summary, what we have here is a car that can't quite pigeonhole itself in any of the market categories you might search in to find potential rivals - Qashqai-like Crossovers, RAV4-style practical mid-sized SUVs and BMW X3 and Audi Q5-like premium mid-sized SUVs. Yes, there are elements of all these kinds of cars in this Honda's make-up but ultimately, it remains distinctively different, distinctively. CR-V. Which ultimately, might very well be all you need. 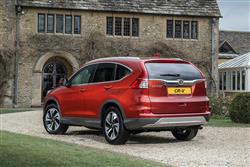 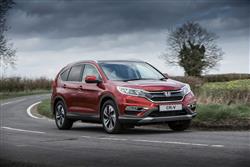 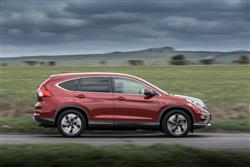 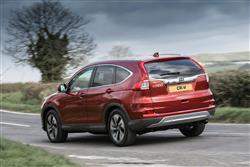 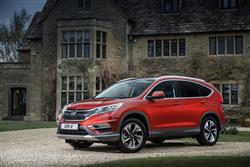 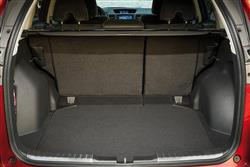