Honda is a car maker that never appears to waste much time looking at what its rivals are doing. It's a company with a well-developed picture of the way things should be done and rather than obsessing over the competition, it gets on with doing them. This approach has given rise to some apparently unusual cars over the years but the great thing about Hondas is that they invariably turn out to work and work well. The second generation Jazz isn't one of the quirkier Honda offerings but it does go about its business in a very different way to most other superminis of its era. Does that make it a used car to seek out or one to sidestep?

The original Jazz was launched in 2001 and it laid the groundwork for the second generation car we're featuring here. It was tall, roomy and in many respects, felt more like a small MPV than a supermini. The range was limited and Honda steadfastly refused to fit a diesel engine despite other superminis with diesel power being offered in numerous trim levels and selling like cold beer on Bondi Beach. True to form, when the second generation Jazz turned up in 2008, Honda stuck to its guns. There was no diesel engine despite the market apparently crying out for one, the practical focus remained, largely at the expense of the sportiness which other brands were building into their small cars, and the range wasn't a big one. The car also continued where its predecessor left off by garnering widespread critical acclaim and a number of awards. 1.2 and 1.4 petrol engines were offered from the start with a trim level choice that ranged from S and SE to ES and EX. Few changes were made to the Jazz but in a bid to inject some extra sportiness into proceedings, an Si models was introduced early in 2010 with a body kit and various other styling accessories.

The packaging brilliance of the first generation Jazz was made possible because the designers moved the fuel tank from beneath the rear seats to a position under those at the front. This approach was continued with the Mk2 model and as before, it liberates the floor of the cabin and allows the seats to be folded into all sorts of permutations. Granted, you don't get the option of removing the rear seats but they almost make up for this in their sheer versatility. The car features the Honda Magic Seating system through which the back seats can fold down in one fluid motion into the footwell with the headrests in place. What's more impressive still is that this action doesn't involve scurrying around the car to manually slide the front seats forward, it can all be accomplished from the rear door thanks to a convenient set of levers. Sports fans will appreciate the fact that if you then recline the front passenger seats, there's enough room inside the diminutive Jazz for a pair of 240cm long downhill skis! Garden centre shoppers meanwhile, will love the way you can lift up the rear seat cushion against the rear seat back creating a tall protected space in the rear seat footwells for items like plants. Meanwhile, you can also load up the surprising spacious Double Trunk boot which can divide its 399-litre capacity into four different configurations for carrying different loads. Fold the rear seats and there's 883 litres of space. Instead of the sprawling line up of different engines and trim levels that are offered by rival manufacturers, Honda kept things relatively simple. The Jazz came in one five-door bodystyle and two mainstream petrol engines with a select group of trim options. Standard equipment includes a CD stereo with MP3 compatibility and speed-dependant volume control. Safety was a major focus in the design process of the Jazz. The car features Honda's ACE body structure which works to help avoid crash situations where larger vehicles ride up over smaller ones. A polygonal front frame channels impact forces back through the car to prevent damage to the passenger compartment. Standard safety equipment was very generous with dual front and side airbags plus full length curtain airbags on all models. There are also five three-point seatbelts with reminders for the belts in the front and the back. Honda's VSA stability control system was available as an option on all models.

The Jazz has starred in various customer satisfaction surveys over the years and is noted for its reliability, as indeed are the majority of Honda products. Problems with its mechanical make-up should be few and far between as a result. Ensure that the versatile rear seating arrangement is working properly and check the interior carefully for condition and trim damage. The practical qualities of the Jazz mean it's more likely to have been used by families with young children than other superminis.

'Sportiness' wasn't too high up Honda's development agenda with the Jazz, hence the lack of any really powerful engines in the line-up. Mind you, that's not to say it isn't good to drive, this Mk2 model, like its predecessor, offering a slick shifting gearbox and swift changes of direction. Both engines use Honda's advanced i-VTEC variable valve timing technology. The 89bhp 1.2-litre unit opens the range and takes 12.5 seconds to reach 60mph. Those seeking a lustier, more power-packed time at the wheel can upgrade to the 1.4-litre with, wait for it, 99bhp and an 11.8s 0-60mph time. Still, power isn't everything. Honda makes great engines and these little petrol units remain very impressive. The i-VTEC system produces smooth revving powerplants with lively performance and good efficiency. Some models will be fitted with Honda's 6-speed i-Shift gearbox. This is an automated manual unit that can be used as a full automatic or a clutchless manual. The engines are refined at normal cruising speeds and take on a high-pitched note when you hold the gears longer. You rarely find yourself being caught out with too few revs on the board or banging into the limiter and needing to grab another gear double quick. When the engine is asked to work hard, on the motorway for example, the noise can become tiresome and there's also a lot of sound generated by the wind at high speed. As befits the MPV-look of the exterior, manoeuvrability is very good on the Jazz thanks to the wide range of visibility, short overhangs and the tight turning circle. There's plenty of adjustment in the driving position and it shouldn't be a problem for most people to get comfortable. The 1.2-litre model can return 55.4mpg on the combined cycle with CO2 emissions of 120g/km, making it a very cost-effective vehicle to run. Go for the 1.4-litre and there's still a 54.3mpg showing on the combined cycle with 123g/km emissions making it one of the cleanest units of its era.

It may not have played by the rules yet Honda's Jazz has a huge amount to offer as a used car. Its safety, reliability and residual values were all out of the top draw, making it a very desirable ownership proposition. It's different to other superminis with no real focus on sportiness in the way it looks or drives but that left the designers free to concentrate on practicality and manoeuvrability, two things that the Jazz does better than the vast majority of its rivals. In many ways, the qualities the Jazz has made it more desirable as a used car than they did as a new one. 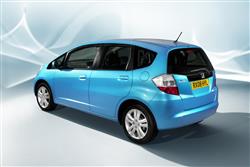 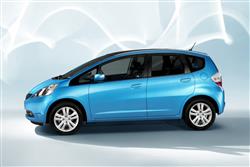 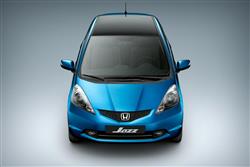 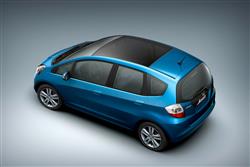 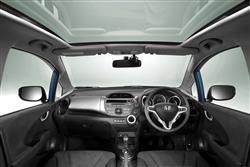 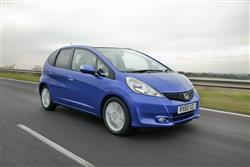