Hyundai doesn't make all that many models that can be considered potentially class-leading but the i10 city car has always fitted that description, especially in the second generation form that was launched in 2013. If you're looking at one of these on the used market, we'd suggest that it might be worth stretching to the facelifted version of this MK2 design, launched at the end of 2016 and profiled here from a previously owned perspective. This improved second generation contender introduced a level of infotainment connectivity and electronic safety provision that buyers in this class hadn't previously seen. As before though, its main draw lay with spacious practicality and in the way it did the basic city car things really, really well. There may be more exciting urban runabouts than this on your radar, but there aren't many better ones.

This model, the Hyundai i10, has long been one of this country's very best-selling city cars. This Korean contender achieved that distinction in its original guise by being very cheap. This second generation design though, consolidated its predecessor's position very much on merit. Here, we're going to look at the facelifted version. One of the interesting things about the market's smallest segment is that it's one of the very few in which you can expect the sales leader to also be the best car. Buyers in search of an urban runabout, you see, can't be bothered with the snobby image issues that restrict Hyundai sales in larger market categories. Which means that the Korean brand has always had a real opportunity for sales growth when it comes to vehicles like this - one that the company has grabbed with both hands in the last few decades. True, its early city car efforts - the curiously quirky Atoz of 1998 and the 'Postman Pat'-like Amica that almost immediately replaced it - were better suited to Far Eastern tastes than European ones. By 2008 though, Hyundai was getting the hang of what Western families were looking for. That was the year we first saw the MK1 model version of this i10, a car that offered supermini style in a smaller, cheaper, more agile and more versatile package than anything we'd seen before. Sales took off, boosted in the UK by the government Scrappage scheme, and across Europe, nearly half a million i10s quickly found happy homes. This smarter, more sophisticated second generation model, launched in 2013, continued this strong showing, but by the end of 2016 faced much tougher opposition from a much wider range of better prepared adversaries. Volume brands like Ford and Vauxhall were by then much stronger players in this segment than they had previously been. Hence the need for this much improved MK2 model i10, announced in the Autumn of 2016. As a segment leader, it needed to be a standard-setter, hence the availability of 'big car' features like a touchscreen navigation system, 'Apple CarPlay' and 'Android Auto' 'phone connectivity and camera-based safety systems that deliver things like autonomous braking and Lane Departure Warning technology. In addition, as before, buyers got one of the most spacious contenders in the class and the potential for running cost efficiency that bettered most major rivals. In this form, the i10 sold until the end of 2019, when it was replaced by an all-new third generation design.

The main styling changes made to the updated version of this MK2 i10 can be seen at the front, which adopted the more distinctive 'Cascading grille' that by 2017 was characterising several of Hyundai's models. Upper-spec versions got small, circular LED daytime running lights in the grille's outer corners and even smaller front fog lamps built into more sharply-defined lower corner air intakes. Back in 2013 when the second generation i10 model was originally launched, the interior of this model set fresh standards for city car quality and design and even by 2017, it was still one of the nicer cabins in this segment. For this facelifted model, the ambience could be lifted with optional blue or red trimming for the dashboard and the upholstery. Plus, on the top 'Premium SE' variant, the fascia gained a more sophisticated feel thanks to the addition of a 7-inch touchscreen Navigation system. In the rear, you'll find a decent level of roominess for this class of car, providing you stick with the carriage of just a couple of adults. Even with a couple of six-footers installed in the back, front seat occupants shouldn't have to compromise space to accommodate them. And the boot? Well the tailgate rises to reveal one of the largest trunk openings in the segment and a 252-litre total boot capacity that's one of the very biggest in the class from this period.

We came across plenty of very satisfied i10 customers in our ownership survey, but inevitably, there were a few issues reported. There were a few issues with sticking clutches. And with rear brake pads sticking to the discs, plus owners have reported that the car is above average in terms of its brake disc wear but below average in terms of its brake pad wear. A recognised fault relates to crunching gear changes and a general difficulty in selecting reverse; look for that on your test drive. One owner we found had had to deal with creaking noises coming from the suspension. One found that his car's stop/go engine system ceased working. And there were several reports of handbrakes that wouldn't properly hold the car on steep slopes. In one case, the electric window switch console failed. And one owner found the brake discs rusting up on a regular basis.

On the move, the i10 meets most of the main priorities that city car buyers will have, so it's easy to see out of, light to steer in town and easy to park, with a usefully tight turning circle. It even copes reasonably well at cruising speeds on the highway, feeling solid and relatively refined at the legal limit. It won't be quite as at home though, if the need arises to push on a little over twisting secondary roads, though with this revised MK2 model, Hyundai tried to improve things a little in that regard. They modified the steering ratio for a little more feel at the helm and added larger front shock absorber bump stops so that the car wouldn't bounce around so much at speed over bumpy tarmac. Engine-wise, there are two options, a three cylinder 1.0-litre 66PS unit and the four cylinder 1.2-litre 87PS 'Kappa' powerplant most original buyers chose. If you favour the smaller three cylinder unit, you might find it in a more frugally-orientated 'SE Blue' guise that sees an engine stop/start system fitted as standard. If your preference is for the four cylinder 1.2-litre variant, then there's a choice of manual transmission or a 4-speed automatic gearbox.

City cars used to be models people went for because they had to. Now, so often, they're little runabouts customers own out of choice. For all the industry plaudits the affordable little first generation i10 received, it wasn't a car you'd ever have felt especially joyful about owning. But this improved second generation version might be. The changes that the Korean brand made to this facelifted model in 2017 weren't especially far-reaching, but they did have considerable showroom significance. Find us another car on the market from this era that can offer autonomous braking, touchscreen navigation and 'Apple CarPlay' / 'Android Auto' 'phone connectivity for the kind of money being asked here. You'll be looking a long time. Here, we've an A-segment contender that's now almost everything it needs to be - and pretty much everything a model of this kind can be. Yes, it's certainly true that a few rivals are a little more enjoyable to drive. Otherwise though, this i10 is not only as frugal, clean and practical as you'd want but in this improved form, also had a little more polish and technology thrown in for a more complete, European feel. In this form, this Hyundai showed that it could either match or beat its rivals in all key areas. Which means that if you're shopping in this segment, you have to consider it. 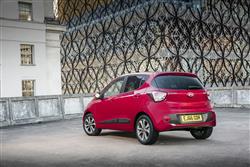 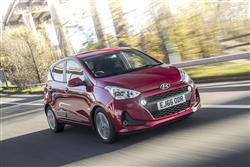 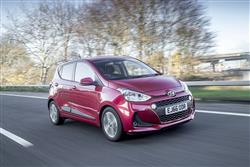 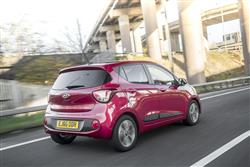 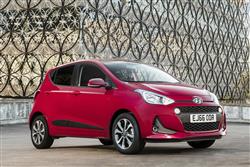 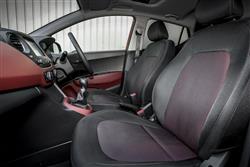