Mention the Hyundai i10 to a car industry type and they'll probably tell you that this was the car that benefited most opportunely from the Government scrappage scheme. Right place, right time and all that. Thing is, the scrappage scheme only lasted a year to September 2010, yet come 2013, the Hyundai i10 still topped the sales charts for city cars, bettering the Volkswagen Up, the Suzuki Alto, the Vauxhall Agila and the Smart Fortwo. So there's clearly more to this car than just mere serendipity. Key to understanding why the i10 has done so well is to look at the 2011 facelift of this model. This upgraded a number of aspects and put the car in a position to retain its number one spot. Used examples of this version aren't too hard to find and they make a great buy if you need cheap, nearly new wheels. Here's what to look for.

The original Hyundai i10 launched in 2007 and replaced the old Atoz and Amica twins. It was a big step forward from those citycar contenders and brought Hyundai nose to nose with some of the best entrants in the class which were, at the time, the Citroen C1, Peugeot 107 and Toyota Aygo triplets. The model we look at here is the heavily revised version of that car, launched in 2011. Chief among the changes were enhancements to the i10's design - both in the cabin and on the exterior of the car. These design improvements demonstrated a clearer family look, bringing it into line with the recently launched ix35 and ix20 models. An improved range of Euro V compliant engines were also offered. An all-new 1.0-litre 'Kappa' engine replaced the old 1.1-litre 'Epsilon' unit. The popular 1.25-litre 'Kappa' powerplant was also improved, giving 13% more power (85bhp) as well as less 9.2% less CO2 and 8.7% better fuel consumption than the outgoing 1.25-litre 'Kappa' unit. To make the most of the efficient 1.0-litre engine, Hyundai also introduced a variant that was instantly popular - the i10 Blue. This special 'eco' edition of the i10 emitted 99g/km CO2, so it gained exemption from VED and the London Congestion Charge. At the time of its launch, it was the only sub-£10k five-seater car on the market to achieve this. The first generation i10 model's replacement was announced at the tail end of 2013 for a 2014-model year launch.

The revised MK1 i10 range consisted of four trim grades - Blue, Classic, Active and Style - all of which offered strong value for money. Equipment specification across the i10 line-up was comparatively impressive, with usually optional features, such as air conditioning and the addition of an iPod plug-in, standard fit on all models. As part of a generous equipment list, customers also got four airbags, a six-speaker stereo, electric windows and central locking, all as standard on all models. The i10's cabin took a step up in terms of fit and finish with higher grade materials used throughout. As for the practicalities, well the interior features a dash-mounted gear-lever but it's mounted on a bit of the dash that extends down so low that cross-cabin access isn't really on the agenda. The rear bench is set-up to take three passengers, unlike the pair of moulded seats you find in the rear of some rivals. Oh and remember that the i10 is a five-door only model.

As owners have indicated, the i10 is an extremely reliable car. This facelifted car only improves the breed further. Hyundai's comprehensive five year warranty offers excellent peace of mind and any car you look at should have been serviced on the button. The only real things you'll need to look out for are parking knocks and scrapes and any damage to the interior caused by kids.

(approx prices, based on a 2012 1.2 Classic) Hyundai spares prices have gained an enviable reputation for good value and replacement parts for the i30 are no exception. A clutch assembly is around £150, whilst front brake pads weigh-in at around £40. An alternator will cost around £130 and for a starter motor you'll be looking at £120.

Hyundai didn't major on choice when the first i10 was launched. Everyone got a 67PS 1.1-litre petrol engine and that was their lot. The company subsequently added a 1.2-litre powerplant with a significantly healthier 85PS to the range and this has proved the most popular engine with buyers of the facelifted car. The 70PS 1.0-litre unit is certainly worth searching out if you really want to drive down running costs but the 1.2-litre unit gives usefully more zip. It'll top out at 105mph and break the 62mph barrier in a respectable 12.2 seconds. There's still no diesel engine offered and it's probably a sound decision. Buyers of this type of car rarely rack up enough miles to make the incremental cost of buying a diesel work out versus the savings they'd see in fuel bills. Otherwise it's a fairly vice-fee driving experience. Yes, the suspension can thump a little over bad city streets and the steering could use a little more feel but those same criticisms could be levelled at each and every one of its rivals. An i10 isn't really about delivering a sparkling driving experience though. It's more about a low price, a great warranty and decent reliability and practicality.

To some, the Hyundai i10 is the anti-car, a vehicle that's bought by people with no interest in cars just because it's inexpensive and has a warranty long enough to outlast much of its target clientele. That's perhaps a bit harsh because Hyundai has built a class leader here, reflected by its strong sales and ongoing customer loyalty. Sure, it's not the most exciting car in the world, but there's a big slice of the population who just need - not want - four-wheeled transportation and require the experience to be as painless and uninvolved as possible. For them the i10 is perfection. What's more, it works just as well as a used car as it did when new and is worth seeking out in the later, better facelifted 2011-2013 guise we've been looking at here. If you have three grand-odd in your account and need cheap transport but see cars as largely trouble, there's not another vehicle we'd recommend over an i10. Sometimes cars are for sunny days in the Italian Alps with Matt Monro providing the soundtrack. More often, they're for people who buy Hyundai i10s. Each to their own. 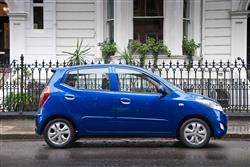 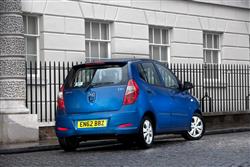 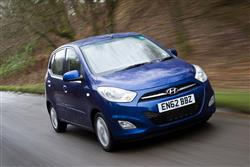 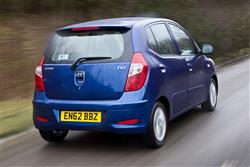 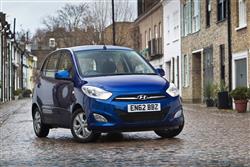 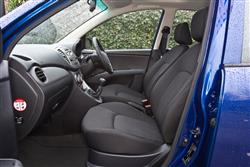