If there was one truism with Hyundais of the past, it was that the bigger the car became, the less competitive it would be. The brand's i40 was a medium range Mondeo-sized challenger that back in 2011 aimed to comprehensively knock that kind of thinking into touch. Offering accessible pricing and plenty of space and equipment wasn't anything new for the Korean company back then, but the quality of finish and the maturity of the styling on offer here certainly was. Let's check out the i40 as a used buy.

We don't tend to think of large Hyundais as being especially desirable - but with the i40, the South Korean maker was determined that we should. Their smaller models had always made more sense on paper than those of most rivals, but the larger and pricier a car becomes, the bigger is the role played by badge equity. Which, with this maker, had been slowly building prior to this car's 2011 launch as buyers realised this to be a brand beyond the bargain basement, a marque capable of producing tempting Mondeo-class medium range models like the i40. It certainly represented a big step up over its unremarkable Sonata predecessor. But that step needed to be seismic for Hyundai to get on terms with the Vauxhall Insignias, Volkswagen Passats, Peugeot 508s and Renault Lagunas that at the beginning of the 21st century's second decade were battling Ford's Mondeo in the medium range market. In a segment then splintering sales to People Carriers, Crossovers and MPVs, it was no longer enough simply to offer a 'good product'. Executive quality had become the norm, an attribute previously unfamiliar to Hyundai motorists. To be able to deliver this, as well as class-leading practicality and low running costs alongside more typical Hyundai virtues of strong value and high specification, was asking for quite a car. Still, the i40 had a decent stab at delivering on this brief. A 1.6 CRDi diesel engine replaced the original 1.7-litre unit in 2018. And the i40 range sold steadily until it was eventually deleted from the range in 2019 without being replaced.

'Fluidic sculpture' sounds as if it should create an elegant result. Here, it did. Heavily influenced by Hyundai's Frankfurt R&D centre, this was a design you'd never have seen from a Korean brand until 2011. The hexagonal front grille is shaped like a diamond, the headlights surrounding it modelled on those of a bird of prey and containing hook-shaped strips of LEDs that glow white in daylight. It's neatly styled at the rear too, with a smart chrome strip between the lights and an integral spoiler above the rear window of the 'Tourer' estate version. It's this estate that most UK customers tended to want rather than the alternative saloon variant, especially as Hyundai never bothered to offer a five-door hatch. Equal efforts were expended upon the stylised interior with its neat graphics, faux aluminium detailing, classy high-definition display screen and nice design touches. There's plenty of soft-touch plastic too, though that doesn't extend to things like the door-pulls and the door skins. Only the shiny column stalks remain as a reminder of the cheap-feeling Hyundai interiors of old. Finding an ideal driving position is easy, our only comment being that it's easy to bash your knuckles with downward gear changes when the central cup holders are in use. At the rear, there's comfortable space for two even with two six-footers up-front and room at a squash for three - pretty par for the course in this class: only a Mondeo or a Skoda Superb from the period offers more. Headroom's good, even if you're in one of the plushest models that have a huge panoramic glass sunroof fitted. It is though a pity that the thickness of the seat bases makes it difficult for rear seat passengers to slide their feet underneath. Any estate car stands or falls by the amount of gear it can carry and the i40 Tourer passes that test without breaking sweat. With the rear seats in place, there's a cavernous 553-litres available - more than you'd get in a comparable Ford Mondeo or Vauxhall Insignia - only estate versions of the Volkswagen Passat and Skoda Superb offer more. Drop the seats by simply pulling on the provided handle and pushing them forward and this will free 1719-litres to the car's head lining, though they don't fold completely flat and the space available is a little narrow between the wheel arches.

We came across lots of satisfied i40 Fastback customers in our owners survey but inevitably, there were a few who had issues. One owner complained of clutch grinding when changing gears, a sticking boot and Bluetooth-linking problems. Another mentioned dash creaks and rattles. Check for signs of interior child damage and insist on a fully stamped-up service history. Other than that, it's a clean bill of health. Hyundai's brilliant five-year warranty arrangement means that these vehicles very rarely fall into premature neglect.

You have to have a very impressive calibre of chassis engineers indeed to be able to make a product simultaneously able to please motorway mile-munchers and driving enthusiasts. In the medium range sector, a Ford's Mondeo from this period nearly manages it and Peugeot's 508 isn't far off but every other product from this time tended to prioritise either one approach or the other. In development, Hyundai was undecided, even producing two prototypes, one stiff, one soft, and asking journalists which would be better - never a good idea. In the event, they came to their senses and realised that cars like this are primarily used as business tools and family transport, with the occasional backroad blitz. The first two things will be comfortably accommodated by this i40 and, assuming you're not trying to follow a Mondeo or a 508, you'll be as well set up on the twisty way home as you would be in any of the more dynamically able cars from this period in this sector, though some might find the rather artificial heaviness in this car's steering a little disconcerting at first. Most buyers will be looking at one of the 1.7-litre CRDi diesel models offering either 115 or 136PS. In some respects, the smaller of the two units feels slightly quicker, its maximum pulling power arriving earlier in the rev range. That's because the pokier diesel has longer gearing, a benefit you appreciate at motorway speeds where it's a little quieter. Sixty from rest occupies 12.9s in the 115PS model on the way to 118mph, figures that improve to 10.6s and 124mph thanks to the 325Nm of torque you get in the 136PS variant. A 1.6-litre CRDi engine replaced this 1.7-litre diesel unit in 2018. Want petrol power? An entry-level 135PS 1.6-litre GDI petrol model slots in between the two 1.7-litre diesel variants, recording the sixty sprint in 11.6s on the way to 121mph. We can't really see the point of going beyond this version to the rare 2.0 GDI petrol flagship model. Its 177PS output promises much but ultimately, it feels little faster than its stablemates, for the record on paper delivering sixty in 9.7s en route to 132mph. Transmission choice includes a 6-speed automatic with steering wheel-mounted paddles, but it's not an especially responsive unit and this standard 6-speed manual will for most be the more satisfying choice. Perhaps one of the things that impressed us most about this car is its refinement, an area Hyundai thought long and hard about. They threw everything at this issue: air-permeable carpet, sound-absorbing layers around the engine - even textile wheel arch liners. It's all enough to make this a very quiet car indeed.

It's took a very long time for the South Korean motor industry to bring us a class-competitive conventional large family car but they managed it with this i40 model. This car ruthlessly ticked all the boxes required for success in the medium range Mondeo marketplace in the early part of the 21st century's second decade. It's smart, spacious, frugal, well equipped and well built. It was, in short, a very competitive car indeed. Other rivals are sharper to drive. And a few have smarter badges. But if you're basing your choice of a used car in this sector from this period on sheer common sense, this i40 is a model you can't ignore. 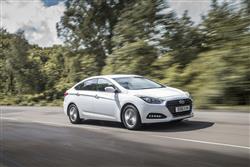 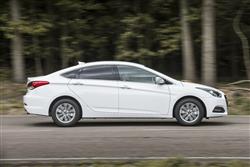 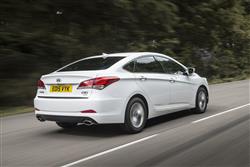 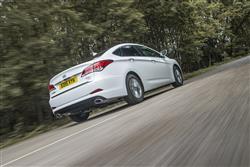 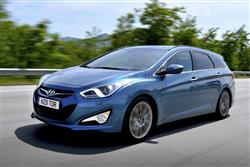 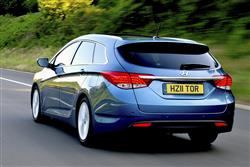