'You drive it. You define it.' That's how Hyundai wants us to view this car, their small Kona SUV. If you like cars of this kind, you're probably going to like this one because it ticks all the usual boxes in terms of style and fashionability. How will it fare on the used market in its standard forms though? Here, we're going to look at the 2017-2020-era pre-facelift versions of the mainstream combustion-engined first generation models and try and find out.

Unlike most of its rivals, Hyundai didn't just base this Kona on the platform of an existing supermini at this model's original launch in 2017. Mindful of the fact that this chassis would also need to undergird a full-electric version (launched in 2018), more bespoke underpinnings were developed, initially for a range which offered customers a choice of 1.0-litre and 1.6-litre T-GDi petrol engines (the latter with 4WD) and a 1.6-litre CRDi diesel. The diesel was quickly dropped, replaced by a 1.6-litre full-Hybrid petrol model. The conventional 1.6-litre petrol variant with its 4WD option didn't last long either. Which explains why if you want a combustion-powered version of this pre-facelift 2017-2020-era Kona, it'll almost certainly have either a 1.0-litre T-GDi petrol engine (by far the most likely) or a 1.6-litre full-Hybrid petrol unit. And it's virtually certain to have front wheel drive. The full-battery Kona Electric model was launched in 2018, with a choice of 39kWh or 64kWh battery packs. The entire Kona range was completely updated in late 2020, but it's the pre-facelift models we look at here.

A car of this kind has to evoke a reaction from you: that's part of the point of it. The Kona should do that, with its muscular toning, sensuous surfaces and high-contrast fender cladding. It all combines to make this little SUV seem a little more serious in its intent than some of its rivals - which actually isn't far from the truth. Most competitors in this segment are merely stylised versions of the existing superminis they're based upon. The Kona in contrast, is one of the few contenders in the class boasting its own purpose-built SUV platform - which is why it's one of the only ones that can be engineered to offer the option of all-electric power. At the wheel, the driving position isn't especially commanding but the cabin feels of decent quality. On plusher models with leather trim, it could be colour-personalised too, with highlights surrounding the gearshift, the starter button and the air vents, plus the chosen colour is also replicated into the seat stitching - and rather unusually, onto the seatbelts too. Infotainment is also well taken care of, most variants getting an 8-inch 'Display Audio' centre-dash colour touchscreen, your interface for controlling satellite navigation, the DAB audio set-up and a package of 'TomTom LIVE' media connectivity services. You can also connect in your handset using the 'Apple CarPlay' and 'Android Auto' smartphone mirroring systems. And in the rear? Well it's in this part of the car that you're likely to be most keenly reminded that you've bought an SUV based on a supermini-sized chassis, rather than that of a family hatchback. As it turns out, it's not too bad in the back for the carriage of two folk, providing they're not especially lanky of leg. If they are, then compromises will be need to made by the front seat occupants in order to be able to accommodate them. Let's finish with a few words on boot space. The tailgate is light to lift and reveals a 361-litre luggage area. Push forward the 60/40 split-folding rear seat and you'll reveal a relatively flat loading floor with as much as 1,143-litres of total fresh air if you load to the roof.

Generally, most Kona customers seemed very happy with their cars. However, in our ownership survey, we came across a number of issues. One owner advised potential future buyers to always take a test drive at night to check the headlights. The non-LED ones are dim and yellow. Also, moisture can accumulate in the non-LED headlights, plus in the daytime running lights, the fog lamps and the rear combination lamps. Another owner reported that when driving at over 40mph, the vehicle wandered to the left and right without driver input. Another owner had an issue with faulty vehicle speed control with an auto model - the vehicle inexplicably lurched forward when parking and the airbag activated. Other owners reported rubbing and grating noises from behind the wheel; look out for those on your test drive. A gear in the steering system may be the cause. There have also been reported issues with the blind spot collision warning system cutting down, the BlueLink media set-up not working correctly, the cruise control not operating properly and the forward collision warning system disabling itself during use. Otherwise, it's just the usual things for an SUV of this type. Check all the media tech on your test drive - and the workings of the navigation system to see if it's been kept up to date. Check the touchscreens and Bluetooth connectivity. Check the lupholstery for cuts and stains. And inspect the alloy wheels for kerbing damage. Check all the electrical functions too. And insist on a fully stamped-up service history.

On the move, it's probable that likely buyers will approve of the attributes that Hyundai has prioritised here - refinement, ease of use and the way the company's light but accurate 'Motor Driven Power Steering' system makes the car so easy to precisely place on the road, whether you're in town or threading your way at speed through corners on the open road. Engine-wise, most buyers choose this car with Hyundai's well-regarded 120PS 1.0-litre T-GDi turbo petrol powerplant, a relatively frugal unit capable of 52.3mpg on the combined cycle and 125g/km of CO2 (both NEDC figures). Like the mainstream alternative 115PS 1.6-litre CRDi diesel engine, this powerplant comes only with 6-speed manual transmission and 2WD. As an alternative, Hyundai offers a couple of higher-powered petrol and diesel variants that can be had only with a DCT 7-speed dual-clutch automatic gearbox and an on-demand 4WD system. Choose between a 136PS version of the 1.6-litre CRDi diesel. Or a 177PS 1.6-litre T-GDi petrol unit. Going for the 4WD set-up not only gets you an on-demand traction set-up that'll provide extra off road grip. It also means your Kona will come fitted with more sophisticated multi-link rear suspension, with improves the slightly firm ride that characterises lesser variants on poorer surfaces. The final derivative in the range is an all-electric version that offers something new in his segment, powered by a 64kWh battery that claims to be able to deliver a fossil fuel-free driving range of over 210 miles.

Until the arrival of this Kona, cars of this kind had been all about style over substance. Which was fair enough, given that to be what most buyers in the SUV 'B'-segment wanted. We'd been waiting for one though, with a depth of design that might enable a model of this sort to do a bit more - and Hyundai couldn't resist the opportunity to provide it. So does this car have what it takes to stand out on the used market? Well most agree that it's been styled to do so - which in this segment is half the battle. It's also reliable, well built and well-equipped. You might feel that it's difficult to ask more of a used B-segment SUV than that; and we'd struggle to disagree. 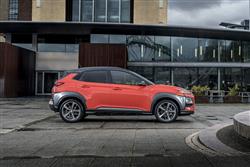 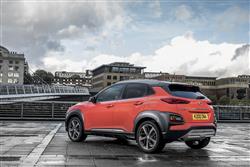 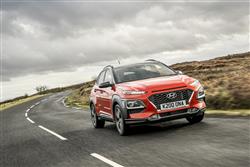 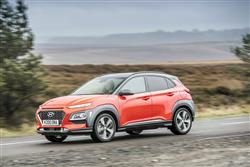 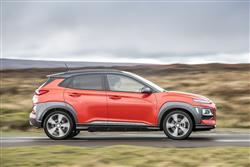 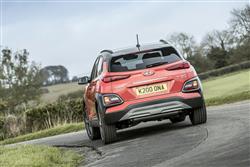