Here's the car that was tasked with putting its Japanese luxury brand Infiniti on the map in Europe against brands like BMW. The Q30, which sold for five years from 2015, was the company first compact car, its first European-built model and in many ways, its first really credible segment-competitive contender. Which is just as well since this premium small hatch targeted tough rivals like Audi's A3, BMW's 1 Series and the car it was based upon, Mercedes' A-Class. It was a difficult brief this car ultimately failed in. But it might be canny used buy.

Let's see if this is you. You need a used Focus-sized family hatch from the 2015-2020 period, but want a nicer, premium-badged one. Maybe you've tried the BMW 1 Series, Audi A3 and Mercedes A-Class models that almost everyone seems to have in this segment, but you'd like something a bit different. In seeking that, you've found a Volvo V40 a little dull and an Alfa Romeo Giulietta rather compromised. Were you to be such a customer, we'd probably point you towards the car we're looking at here, Infiniti's Q30. Of course, it's entirely possible that your route towards interest in this car has been nothing like as logically structured as that. Perhaps you've just seen a Q30, like the look of it and want to know whether it would make sense as an alternative to whatever more conventionally-branded model you're either driving or thinking of buying at the moment. Either way, it's quite likely that you know little or nothing about Infiniti - so we'll start there. This is Nissan's luxury brand, founded in 1989, the same year that Toyota created Lexus to fulfil the same purpose. Lexus of course, quickly became a worldwide nameplate, but Infiniti initially stayed focused on lucrative luxury markets like the US and the Middle East. By the early 2000s, the brand had lazily drifted into simply re-badging Nissan models and was nearly scrapped before Nissan Motors President Carlos Ghosn developed a business strategy that would give the company its own identity, push it properly up-market and launch it into Europe. That took time. It wasn't until 2009 that Infiniti was introduced into the UK and even then its impact was tiny thanks to a miniscule dealer network and a pricey product range that prioritised thirsty petrol power. Even worse, there were no compact affordable volume models to drive sales. Things gradually picked up after that though, first with the 2013 launch of the brand's more accessible BMW 3 Series-sized Q50 saloon and then, more significantly, with the introduction of this smaller Q30 hatch in the Autumn of 2015. The Q30 was the company's first European-made product, built at Nissan's UK factory in Sunderland alongside the Nissan Qashqai model whose underpinnings you'd expect it to copy given that Infiniti didn't have either the time or the money to develop this car from scratch. Actually though, this design's fundamentals come from an altogether different and entirely more appropriate source, Nissan's alliance with Daimler allowing the Q30 to be based very heavily on one of the key contenders it had to beat, the Mercedes A-Class. From this starting point though, Infiniti tried to create a more individual end result in terms of the styling, the cabin feel and the driving experience. It's an unlikely confection and ultimately, it didn't work because Infiniti pulled out of Europe in 2019. But does it make sense as a used buy? Let's find out.

Visually, this car simply had to offer something different in its segment if it was to have any chance at all of making sales headway against the established opposition. Fortunately, it did. Styled at Nissan's Paddington design studio in London, the Q30's shape is a riot of dramatic curves and turbulent lines, enabling it to stand out in a way that makes German prestige-branded rivals look very conservative indeed. And inside? Is it as stylish and eye-catching in the cabin as the exterior panelwork suggests that it might be? No. Still, it's pretty nice all the same. We particularly like the brilliant 'spinal support' seats, designed to match the curvature of your back and reduce fatigue on long journeys by up to 30%. Nor are you stuck with the kind of centre dash infotainment screen that on a rival MK3 A-Class from this era looks like an iPad glued to the fascia as an after-thought. Here, the 7-inch colour display provided is beautifully built in to the flowing curves of the dash top and proves to be usefully informative, with Bluetooth 'phone and audio functions easy to operate using either voice, touch or an intuitive controller behind the gear lever. In the back, the curve of the rear side windows and the amount that the rear wheel arches intrude into the door openings mean that getting in isn't quite as easy as it would be in a more conventional Focus-sized C-segment hatch, though the process is helped by the way that the doors open right out to 90-degrees. It's also pretty snug once you get yourself installed inside. Two modestly-proportioned folk should be fine though - and on plusher models they'll be served by this fold-down centre armrest with its neat-clip-out cup holders. On to the boot. The 368-litre capacity total is a little more than you'd get in a MK3 A-Class, quite a lot more than you'd get in a Volvo V40 or Alfa Giulietta but directly comparable with the room on offer from an Audi A3 or a BMW 1 Series.

Check the leather upholstery on 'Premium'-spec models for cuts and stains. And inspect the alloy wheels for kerbing damage. Check all the electrical functions too. We've come across problems with gear shift indicators not displaying on the dash. If this is evident on the Q30 you're looking at, it means that the gear shift indicator software has not been upgraded - which a Nissan dealer should be able to do free of charge. There were also reports on certain cars of faulty airbag deployment, but this should have been fixed as part of another recall; check that this has been done. A few Q30s had their Airbag Control Unit incorrectly configured and in the worst case scenario this fault could cause an unintended deployment of the driver's airbag. Again, this was fixed with a product recall. There are some reports of the rear seat belt buckles making a rattling noise which is caused by the buckle nuts not being fully secure. In an extreme case the nut may come off and the rear seat belts might not restrain the rear passengers. When this issue came to light, Nissan/Infiniti offered to rectify this by securing the rear seat belt buckles nuts. There were also reports of customers having difficulty applying the seatbelt or slowing the retraction speed when moving it. This was caused by an incorrectly assembled front seat belt which might cause the seat belt upper anchorage to be used at a wrong angle. This could possibly mean that the front seat belt might not restrain the front seat passenger. When this issue came to light, Nissan/Infiniti agreed to recall vehicles affected and replace the front seat belts. Otherwise, it's just the usual things: insist on a fully stamped-up service history.

So what's it like to drive? Well, this Q30 may be derived directly from the underpinnings of a Mercedes A-Class but Infiniti's engineers were determined that it would offer buyers a more comfortable and relaxing driving experience than either that car or its German rivals tend to deliver. Sure enough, the ride quality's un-bettered in this class, plus you get refinement that's also unsurpassed in this market segment. It's all enough to make this car a very pleasant long-journeying companion. Inevitably, the flip side of that is a dynamic experience that isn't quite as involving as some rivals can offer, but the steering feels direct and levels of cornering grip and traction are quite high, especially if you go for the AWD system that was optional on the pokiest petrol and diesel models. These came only with 7DCT twin-clutch auto transmission - for original buyers there was a choice between either a 211PS 2.0-litre petrol turbo or the 170PS 2.2-litre diesel. Most original Q30 buyers though, wanted the lower-powered derivatives. At the foot of the range, there's a 1.6-litre petrol turbo with 122PS - or 156PS if you want auto transmission. Alternatively, there's a 109PS 1.5-litre diesel that makes up for its relative lack of power with extra torque and greater efficiency - expect 68.9mpg on the combined cycle and 108g/km of CO2 (both NEDC figures).

This model should have driven Infiniti's sales figures forward. From the outside at least, the look is distinctively different and, to most eyes, really very stylish. Yes, under the skin, the car borrows much from a Mercedes A-Class, but there's no reason why the average buyer would know that - or care very much if they did. Anyway, what's wrong with borrowing underpinnings from a Mercedes? It's much better than sharing them with a Nissan Pulsar - the kind of set-up this Q30 probably would have used had it been developed by Infiniti in less enlightened times. Impressively, Infiniti was in some ways here able to improve upon the Mercedes recipe for success in this class. A Q30 is more refined than an A-Class, plus it offers a better standard of ride and has a larger boot. On the downside, running cost efficiency here isn't quite up to the same standard. As usual, it all comes down to what you want. But if what you want is a premium compact hatch that's a bit different, then we could see why a Q30 might appeal. Buy a decently specified A-Class, BMW 1 Series or Audi A3 from this era and your car will feel impressive. Get a carefully specified version of this Infiniti though, and it'll feel special. If you can appreciate that difference, then you'll appreciate one of these. 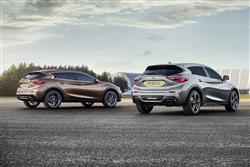 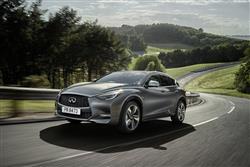 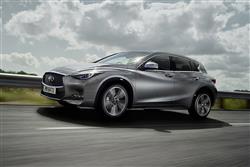 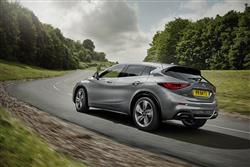 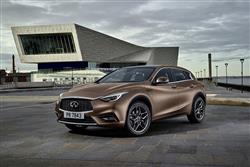 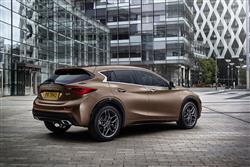