Infiniti's Q50 is a mid-sized premium executive saloon sold between 2014 and 2020 that focused primarily on luxury and technology in its efforts to offer buyers in this segment something genuinely different. Later versions of this model offered improvements that made a big difference to this car's driveability, with changes to the steering and suspension that made it more engaging on the move. The result is an often-overlooked contender that might just surprise you.

The mid-sized executive saloon. Think of this kind of car and you think of BMW's 3 Series, Audi's A4 or the Mercedes C-Class - maybe also Jaguar's XE. These four models dominated this segment in the 21st century's second decade but did so in such a way that choosing one of them become something of a lazy, predictable choice. So, what if you like this kind of car but, in choosing a used model from the 2014 to 2020 era, want a stylishly different alternative. Well you might like to try something like this, the Infiniti Q50. There are, of course, other options in the segment from this period if you want to go your own way, but they usually come with caveats attached. A Volvo S60 isn't quite classy enough, an Alfa Romeo Giulia has uncertain residuals and a Lexus IS can't be had as a diesel. This Q50 model, in contrast, seems - at first glance at least - to offer a more credible alternative to mainstream mundanity. It's attractive, beautifully made, extremely well equipped and built with Mercedes engineering. Interested yet? The Q50 was the Infiniti brand's first really credible European offering, launched in 2014, then significantly updated three years later with some significant packaging and handling updates. It's certainly not lacking technology. Take the clever 'Direct Adaptive Steering' system original buyers could have on plusher models, which was the world's first digital steering system and a set-up upgraded with various developments as part of the 2017 facelift. It effectively allows the car to control itself, while also offering various ways to tailor the response you get at the wheel. More noteworthy features are found in pricier petrol models. Things like V6 hybrid power with the option of AWD. And a 'Dynamic Digital Suspension' system that aimed to set new standards for adaptive damping. It all amounts to a somewhat unlikely confection and ultimately, it didn't work because Infiniti pulled out of Europe in 2019. But does the Q50 make sense as a used buy? Let's find out.

Styling is something of a unique Infiniti selling point. This is what drew people to the brand's smaller Q30 hatch and it's certainly always been an attraction of this Q50 saloon. It's common in the mid-sized executive class for any given contender to be merely a visually scaled-down version of a larger full-Executive sector model, which isn't really very imaginative. It was a welcome change then, to see that Infiniti cut the Q50 from a different cloth. There's certainly nothing else in the segment from this era that looks quite the same. Behind the wheel, the premium feel you get on upper-spec models is also reflected right down the range - in contrast to German rivals where base models tend to make it very clear how little you've spent. Leather upholstery is standard providing you avoid entry-level trim and 'Sport' models get emphasised side bolsters that provide a little more cornering support. The first thing you're likely to notice in the Q50's cabin though, lies on the centre stack. Infiniti decided that Q50 drivers needed not one but two infotainment screens, an 8-inch upper one and a 7-inch lower one. The higher monitor deals mainly with the navigation and surround view camera systems (where fitted), the display of which you can alter via a rotary controller below the gearstick. Below that is the rocker switch for the 'driving mode selector' system, the options for which also display on the upper screen. Switch your gaze to the lower 7-inch display and you'll enter the world of Infiniti 'InTouch', a set-up that not only delivers the usual Phone, stereo and information functions but also allows you to run your life as effectively from inside your Q50 as you can from your smartphone. In the rear, you'll find one of the more spacious rear cabins in the sector from this era. As usual in a car of this class, there's a high central transmission tunnel to prevent the comfortable carriage of three adults, but two folk get reasonable leg and shoulder room by segment standards. As for the boot, well the cargo space is deep, but not especially wide due to wheel arch intrusion. In the diesel variant, you get 450-litres of room.

There were some issues reported regarding the brake pedal feeling spongy, so check for that on the test drive. To fix this, you have to replace the master cylinder - not cheap; some owners reported that this was an ongoing issue for them. They had to take it back to the dealership a few more times for the same problem with the master cylinder. Other owners have highlighted problems with the sat-nav, the touchscreens and Bluetooth connectivity. Check the leather upholstery for cuts and stains. And inspect the alloy wheels for kerbing damage. Check all the electrical functions too. Otherwise, it's just the usual things: insist on a fully stamped-up service history.

Infiniti may be Nissan's luxury brand but the engineering here is anything but mainstream. It's not only that the volume 2.2-litre diesel variants borrowed their engine from Mercedes: it's also that some of the technology potentially available in this car was genuinely cutting-edge. Take the steering system. It's the thing people talked about most when it came to the driving dynamics of this car. That's because this model was first launched with the option of what Infiniti called 'Direct Adaptive Steering' - or 'DAS' - the first 'drive-by-wire' system to steer a car. Using this set-up, your intentions aren't transmitted to the wheel via the usual steering column. Instead, inputs from the steering wheel are processed via electronics, then motors replicate your commands at the wheels. The advantages of this system lie in the fact that steering inputs should be quicker, plus steering kickback and vibration should be all but eradicated. Away from steering, there's plenty else to talk about. The 170bhp diesel unit isn't class-leadingly efficient but its returns - up to 65.7mpg and 114g/km of CO2 (both NEDC figures) - will probably be acceptable for most potential buyers. Of course, the rarer more powerful petrol variants further up the range can't match that. There are three to choose from, a 211PS 2.0-litre turbo variant, a 400PS 3.0-litre V6 twin turbo model and a 306PS Hybrid derivative that from new could also be ordered with AWD. Across the range, buyers get a 'Drive Mode Selector' that can tweak steering, throttle and gear change feel. And the top 3.0-litre variant showcases a clever 'Dynamic Digital Suspension' system that constantly reacts to the road surface.

We can't help liking the Q50. It did, after all, offer an intriguingly different option in what can be a rather predictable segment. And in contrast to obvious rivals from this era who feel the need to slavishly follow the dominant brands in offering perceived 'sportiness', it brought an unashamed focus on refinement and luxury that we think most typical buyers on the used market would actually rather appreciate. To be one, you'll need to be an understanding sort. You don't get class-leading efficiency figures here, or the support of a vast dealer network. And, as we've suggested, drive dynamics focus on lowering your heartbeat, rather than raising it. Against all that though, there's plenty that'll draw you to this car. From its handsome looks to its spacious, well appointed cabin, it pampers its passengers in a way that few of its rivals do. The Q50 isn't an obvious choice but, for the right kind of buyer, it could be a very satisfying one. 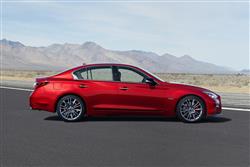 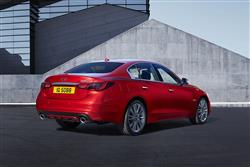 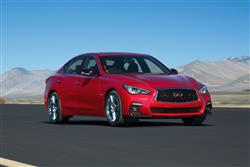 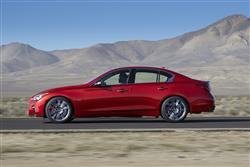 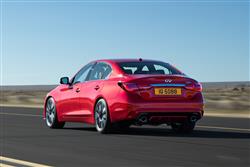 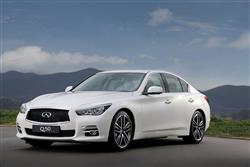