There are vans that are all about soft-touch dashboards, 'car-like' handling and glitzy styling and then there's the IVECO Daily. If asked to name the least glamorous commercial vehicle around, the workmanlike IVECO would be in with a shout. Sometimes though, you just need a workhorse that can take a beating and keep coming back for more. That's pretty much IVECO's ethos and, while its vans aren't going to win any beauty prizes, they sell because they're inexpensive and they work well. Here's what to look for when shopping for a used Daily panel van.

We could go into pages and pages on the Daily's long and convoluted history, stretching back to 1978 across all body styles, engines and trims but I suspect that by about 1983, you'd have dropped off to sleep and I'd have lost the will to live, so to keep things businesslike, let's concentrate on the last generation of Daily models introduced in 2011. Even that was the sixth Daily makeover in 12 years and it majored on Fiat-sourced engines that were cleaner and more powerful, some serious and overdue safety upgrades, increased payloads and better cabin comfort. In an LCV market where vans are often car-derived, the Daily's different. It gets a truck-derived chassis of unrivalled strength, versatility and durability which is why it was the first vehicle in its class to offer a load volume of as much as 17.2m3 and a gross vehicle weight as heavy as 7 tonnes. As a result, this Daily may reckon itself to be tougher than its large Transit-class rivals but it's also traditionally been seen as utilitarian and inefficient beneath the bonnet. IVECO takes issue with this and claims to have proved its point by creating a version of this van that's smart as well as strong, tactile as well as tough, frugal as well as fit for purpose. This version of the Daily did well, securing massive orders from operators such as ASDA and TNT Express before being replaced in late 2014.

The IVECO Daily makes old nails look fragile. The Fiat-sourced engines are in a generally rather low state of tune and don't require much in the way of looking after. The body is fairly tough too, although the longer vans will often have picked up parking scrapes that can show up quite readily on the black PU bumpers. Check the wear items such as brakes, tyres and clutch for signs that they're on their last legs. Also inspect the door locks and make sure they're all functional. The cabin is again hardwearing but the plastics can pick up superficial scratching quite easily and some of the cargo boxes are heard to keep clean.

(approx based on a 2013 IVECO Daily) Rear leaf springs are £180 a set, while a windscreen washer pump can be picked up for around £12. A timing belt cost £42, an indicator is £25 and you should be able to pick up a recon alternator for around £70. A brake hose is £10 and a starter motor will demand £120 of you. In other words, it's all quite reasonably priced.

Truck-like toughness sounds good on the balance sheet, but doesn't hold much appeal if it comes with a van you've to drive long distances in or hurry through a set of twisties on the way to a short notice appointment. So how will this Daily van fare given its truck-tailored underpinnings? Better than you might be expecting it to is the answer. Thanks to a high seating position and monster wing mirrors, it's an easy van to drive, especially round town where the light steering facilitates a tight 11.5m kerb-to-kerb turning circle (or 12.4m wall-to-wall). On major routes, you might wish the steering to be a little weightier and more positive, but at least decent engine refinement and plenty of cabin insulation make longer trips quite bearable. And when the going gets twisty? Well, there are certainly more sharper-handling large vans out there but it's more important to note that there are few that ride more comfortably or have torquier engines. Most Daily customers buying when this vehicle was new opted for the 2.3-litre Multijet II diesel, offered with either 106, 126 or 146bhp, units pokey enough to put out anything between 270 to 350NM of torque. Enough to tow a braked trailer of between 2800kg and 3500kgs, depending on the variant chosen. Not enough for the job in hand? Then you'll need the 3.0-litre Common Rail diesel option, with a choice of 146, 170 or 205bhp, the latter twin turbo unit the most powerful four cylinder diesel on the market putting out a hefty 470NM of torque. This powerplant can be a little noisy at start-off but becomes surprisingly refined once you get it up to speed. It's usually mated to a six-speed manual gearbox, rather than the five-speed stick you'll find further down the range. Either way, the dash-mounted gearshift lever is right where you'd want it to be with a slick change and an easy action, though urban users will prefer the optional AGile 6-speed automated transmission. Automatic transmission is, inevitably, a standard part of the Daily Electric model which, depending on your choice of wheelbase, gives you the choice of either two, three or four batteries which collectively, can provide an operating range of up to 130kms. Nor is this IVECO's only stab at eco-friendly commercial motoring. If you've access to regular supplies of environmentally-friendly landfill methane gas, then you might want to consider the 'Natural Power' model. This features a 3.0-litre 136bhp engine tuned for methane power but able to run on ordinary petrol if you need it to. As for the ride quality we mentioned earlier, well it'll depend to a great extent upon your choice between three different suspension systems which can be hung from the rear axle - parabolic, semi-elliptical and air. You'll want to specify the air suspension if you regularly carry materials that are sensitive to shock and vibration, for it delivers improved damping vibration and always keeps the vehicle perfectly level, irrespective of load distribution.

You certainly won't be short of choice when choosing a used IVECO Daily van. They're hardly thin on the ground and now is a good time to look for bargains. You ought to be able to negotiate hard, as it's a buyer's market. If you're after a solid workhorse, the Daily still stacks up very well indeed. You'd still rather be behind the Excel spreadsheet than behind the wheel but if money talks, the Daily is right there in the conversation. 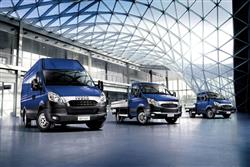