The Jaguar XE delivers a smartly executed take on the compact executive genre, offering something appealingly different to the usual German suspects. On paper at least, it seems to have the design, technology and ambition necessary to appeal in this segment, with the dynamics of a BMW and the luxury of a Mercedes, plus all the efficiency and connectivity modern business buyers now expect. Here, we look at the original 2015-2018-era versions of this model from the used buyer's perspective.

At its launch in 2015, the XE turned out to be the most advanced, efficient and refined sports saloon the Jaguar brand had ever built, a compact executive model that at last, offered a credible alternative to premium models in the 3 Series, C-Class or A4 segment. From launch, the car featured frugal Ingenium engines and had a 'clean sheet' feel to its design underpinned by the £2 billion-worth of investment that had been poured into it. Everything, in other words, was very different to what we were given the last time Jaguar entered this segment back in 2001 with the ill-fated X-TYPE. That car showed this Coventry marque the hard way that there are no short cuts to success in the compact executive sector, something brands as significant as Toyota have also learnt to their cost. The Japanese maker tried for years to create a Lexus IS by simply reworking an Avensis and Jaguar's experience in trying to fashion that X-TYPE out of a humbler Ford Mondeo was just the same. Forget all that though, for this is a very different car, a proper Jaguar and a proper challenger to the Germans in this class that arrived with a very clear objective: to return its brand to the forefront of this sector, the position it enjoyed with the iconic MK II model back in the Sixties. That's a lot to ask, which is why the brand took so long to re-enter this crucial segment. Expectations are high for the XE, but sales were relatively disappointing, with only around 40,000 sales in its first four years of production life. The car was significantly updated in the Spring of 2019, but it's the earlier versions we look at here.

As its predecessor the MKII model was in the Sixties, this XE is unmistakeably a Jaguar, its upscale proportions delivering the kind of dynamic and purposeful look needed for success in this segment. It's unmistakeably a modern Jaguar too, so there are few of the retro touches that have so characterised and maturely pigeonholed some of the brand's other modern era designs like the S-TYPE and the X-TYPE. Instead, the XE echoes the styling approach first established by its larger XF showroom stablemate, with an aggressive grille, a strongly-sculpted bonnet, a steeply raked windscreen and a rising waistline. The resulting shape catches the eye - and cleaves the air like no Jaguar before it, registering a phenomenally low 0.26 drag coefficient. It's not afraid to be different either, not only in how it looks but also in how it's made. At launch, this was the lightest and stiffest car the brand had ever built, thanks to the fact that over 75% of its structure is fashioned from aluminium, a proportion far higher than you'll find in any other rival in this class from this era. At the wheel, you sit low, cocooned by a deep centre console that creates a cockpit-style feel. There isn't perhaps the really high-end premium feel that you'd get in a better-appointed Mercedes C-Class, but in upper-spec models, buyers can get themselves a cabin easily on a par with that of a rival BMW 3 Series and Audi A4. There are interesting touches too, like the smart metal-finished air vents that extend the fascia to nestle into the door casings - and of course Jaguar's trademark rotary automatic gear shifter that glides up into the palm of your hand on start-up. The dished three-spoke leather-stitched wheel is also distinctive, if slightly over-buttoned, with cruise control functions fitted on one side and switches for driving information adjustments on the other. Through it, you view an instrument binnacle dominated by a rather low-res driving information display and pair of deeply-cowled dials that Jaguar would prefer you recognised from their F-TYPE sportscar rather than a Range Rover Evoque. Also attempting to deliver cabin clarity is the feature that dominates the centre console, the colour touchscreen that lies at the heart of the XE's 'InControl' infotainment system. It not only deals with the expected audio, climate, telephone and navigation functions but also allows access to a whole suite of 'InControl' connected-car technologies. As for the rear seat, well initially, the high rear deck makes it appear to be a little claustrophobic but get yourself comfortable and you'll find that it's a little more spacious than it first appears. Even if you're a six-footer sitting behind a front occupant of similar stature, you should still have an inch or so of legroom to spare, thanks in part to the deeply-scalloped seatbacks. The boot, at 455-litres in size, is 25-litres smaller than that provided by rival BMW and Mercedes models.

Most XE owners in our survey seemed very satisfied, but we did come across a few issues. Most of the problems you'll come across seem to be electrically-orientated but we've also heard of issues with the bodywork, the steering, the fuel system and the suspension. We've heard of a number of problems with the sat nav and WiFi, caused through a JLR upgrade that not all cars will have had; check if the one you're looking at has. Check all these things on your test drive - and look out for scuffed alloy wheels that could be pricey to fix. And, obviously, insist on a fully stamped-up service record.

On the move, you sit low in contour-hugging seats in front of a chunky sports steering wheel that, like the deeply-cowled instrument dials, is borrowed from Jaguar's F-TYPE sportscar. It's a driver's environment, a place to do business with the road, with the raised centre console adding to the cockpit-style feel. Stab the pulsing start button and if, like most potential owners, you've opted for automatic transmission, the brand's trademark rotary drive selector rises up into the palm of your hand. You're ready. Set off and you get to experience what Jaguar's engineers call the '50 metre feel' - the all-important first impression that any vehicle conveys about the way it will drive. This one feels sharp, purposeful and, from the very start, beautifully composed over our country's terrible tarmac. Automatic models made up the majority of XE sales in the early years: indeed, the 8-speed ZF 'box in question is mandatory if you're one of the minority of buyers looking for petrol power in this car. Green pump-fuelled variants initially got this smooth-shifting transmission mated to a 2.0-litre Ford-derived engine developing either 200 or 240PS. It was later replaced by Jaguar's own 'Ingenium'-series unit. If you want more, then you'll want the potent 340PS XE S, which borrows its supercharged 3.0-litre V6 from the F-TYPE sportscar and powers to 62mph in just 5.1s en route to 155mph. Handling is aided by an immensely feelsome electric power steering set-up. And a sophisticated Integral Link suspension system that gives a class-leading ride and handling balance able to give some credence to Jaguar's claim that this was a real driver's car in its class.

Bold, innovative, forward-thinking and able to level with the class best, this XE proved to be the most credible Jaguar sports saloon we'd seen since the Sixties. It chased bigger sales but unlike some of its predecessors, didn't dilute crucial elements of brand credibility to do it. On the contrary, it's a model company founder Sir William Lyons might have been proud of. He sought to make cars that made their owners feel 'alive' and the objective of this one was exactly that, aiming at nothing less than a fresh dynamic benchmark in the German brand-dominated compact executive segment, a target it got very close to achieving. Failings are relatively few. Yes, buyers will lack a little when it comes to boot space and some may find selected areas of the styling approach to be slightly conservative. There's nothing wrong with the fundamentals of this design though and the aluminium underpinnings that lie beneath that taut bodywork are more sophisticated than anything previously seen in this segment in this era. In short, this is an under-rated car. Before you opt for a used 3 Series, C-Class or A4 in this segment, seek an XE out. We think you might like it. 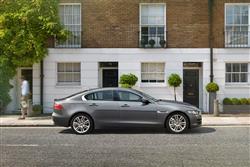 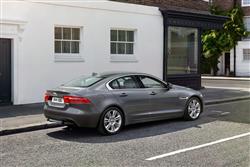 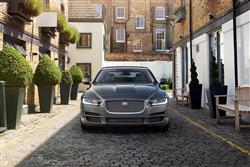 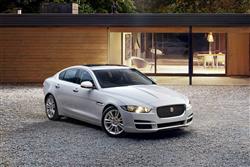 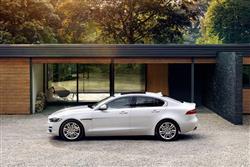 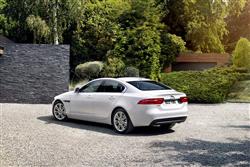