Everything pointed to British executive car buyers harbouring a powerful and undying love for German cars. Camp out in the undergrowth bordering any golf club car park or blue chip company headquarters and you would see the cavalcade of Teutonic engineering ferrying the sales directors and area managers about. Better still, you could simply stay at home and look up the sales charts. They'd invariably look more German than leather shorts. But what if the British are not strangely predisposed towards German cars? What if our executives are just choosing them on merit and would really like to drive a something with a famous British badge? If that were the case, all Jaguar needed to do was build an executive saloon that was competitive against the German alternatives and buyers would come flocking. The XF was that car.

Toppling the might of the BMW 5 Series, Mercedes-Benz E-Class and Audi A6 has proven to be one of the motor industry's more thankless tasks. These executive expresses take few prisoners with the amount of technology and engineering excellence they manage to cram on board. Jaguar's S-Type was launched in 1999 and was a decent effort in many ways but ultimately one which failed to make much headway. It also outstayed its welcome by a good few years, continuing to serve as Jaguar's representative in the executive car market right up until 2008 by which point, it was creaking noticeably. The XF was the replacement for the long serving S-TYPE and it arrived at a time when Jaguar was giving signs that there might just be a resurgence in the offing. The XJ luxury saloon that launched in 2003 was an underrated car and the XK coupe that showed up in 2006 had gone down a storm. There was still the lingering whiff of the X-TYPE around Jaguar dealerships but confidence was high that the XF could be a real contender. The design was previewed by the C-XF concept car at the 2007 Detroit show and production car that looked reassuringly similar turned up at the Frankfurt show later that year. The first XFs were delivered in the UK during spring 2008, shortly after Jaguar and Land Rover were sold by Ford Motor Group and became wholly owned by TATA. Initially, there was a choice of 3.0-litre V6, 4.2-litre V8 or 4.2-litre supercharged V8 petrol engines with a 2.7-litre diesel. The XF really came into its own around a year later when a new generation of engines was introduced. The 5.0-litre V8 petrol and the 3.0-litre TD diesel gave the car the efficiency and performance to really have a crack at the German dominance in the British executive car market.

The XF didn't appear to be the most spacious car in its sector but the coupe-like lines do belie the amount of space inside. There's room for five adults in comfort, generous interior stowage and a boot capacity of up to 540 litres (plus the opportunity to fold the rear seats and add a further 420 litres). At 4961mm long and 1877mm wide, on a lengthy 2909mm wheelbase, the XF is a substantial car, larger than the BMW 5-Series, Lexus GS and Mercedes-Benz E-Class that were available at the time of its launch. So, get in and settle yourself behind the wheel. What's it like? Well, on entry to the XF, the start button pulses red, like a heartbeat (ignition keys are so 2007). Start the engine and the JaguarDrive Selector for controlling the automatic gearbox rises into the palm of the hand, while rotating air conditioning vents turn from their flush, 'parked' position to their functional open position. The intention was to make the XF feel special and it does. The XF offers three trim levels: Luxury, Premium Luxury and Portfolio as well as the range-topping R derivative which replaced the SV8 that was offered from launch. Externally, with the exception of the pumped-up R, all cars look similar. All come with leather trim, electric seat adjustment, sat nav with colour screen, Bluetooth 'phone connectivity, a 6-disc in-dash CD autochanger, rear parking sensors, 17-inch alloy wheels and cruise control.

Unlike earlier generations of Browns Lane cars which had their fair share of niggling faults, the XF has suffered no major problems, which is great news for used buyers. The usual cautions still apply though: stick to main dealers or reputable specialists and don't be tempted by a potential bargain car that doesn't have its service history present and correct, especially the supercharged SV8 and XFR models.

The XF's drag coefficient is as slippery as its sleek lines suggest at just 0.29 and the front-to-rear lift balance is precisely zero. This aerodynamic performance contributes to impressively low wind noise, aids fuel consumption and helps with high-speed stability. Key driving aids on the XF include Electronic Brake Assist, Electronic Brakeforce Distribution, the usual Anti-lock Braking System, Dynamic Stability Control, Cornering Brake Control, and Engine Drag Torque Control. And, for the first time in a Jaguar, Understeer Control Logic which decelerates the car and helps to restore grip to the front wheels when required. All the engines are mated to Jaguar's Sequential Shift six-speed automatic transmission with steering wheel-mounted 'paddles' for manual gear selection. You can understand the company not bothering to try and take on BMW and offer a conventional manual gearbox option but at least it did deliver competitive diesel engines. The most popular units are the 237bhp or 271bhp versions of the 3.0-litre common-rail diesel unit with the latter employing twin turbochargers to achieve its performance. The XF's lightweight design means a 0-60mph sprint of under six seconds is achievable in the more powerful car. If that sounds like overkill, a more prosaic option is also available in the form of a 236bhp version of the same engine. Here 0-60mph can still be covered in 6.7s. The top 5.0-litre V8 petrol units offer either a 385bhp normally aspirated engine good for sixty in 5.5s or a supercharged version of the same powerplant which covers the same increment in 4.7s but, just as importantly, provides a wonderful soundtrack wail to accompany the experience. The key benefits of the super-efficient combustion achieved by the XF's 3.0-litre diesels are the 42mpg combined economy and 179g/km CO2 emissions. These figures are the same for both the 237bhp and the 271bhp models making the more powerful Diesel S look very competitive against the likes of BMW's 535d. The petrol units are predictably thirstier but there's not as big a gap between the 3.0-litre V6 and the 5.0-litre V8 as you might have expected. Buyers can expect 26.8mpg from the V6, 25.4mpg from the V8 and 22.4mpg from the supercharged V8.

The German dominance of the executive car market was always going to be a tough thing to break but Jaguar pulled it off with the XF. The car's classy image and evocative styling offered a tempting alternative to the usual executive car choices from BMW, Mercedes and Audi. More surprisingly still, it can live with these rivals in terms of driving dynamics and its engine technology. As a used buy, the XF looks no less compelling. 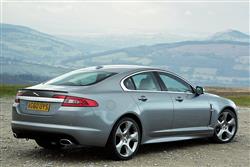 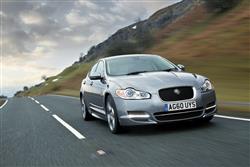 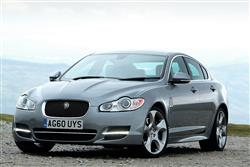 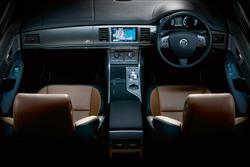 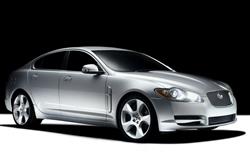 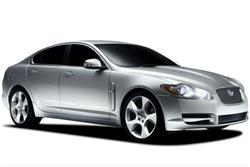