When Jaguar launched the XFR super saloon in 2009, it was lauded for its performance and handling, which were described as BMW M5-rivalling at worst and M5-beating at best. Come the XF's facelift in 2011, a much-needed aesthetic overhaul was revealed, but under the sharper, more aggressive new look, it was a case of 'more of the same, please'.

The first XFR was actually rather short-lived, having been brought out in 2009 to offer a more dynamic replacement to the 4.2-litre XF 'S' model, but by 2011, the XF's looks were starting to date and both XF and the related XFR were refreshed. Despite this short lifespan, the original XFR had made a big impression, taking the fight to the BMW M5 in its own particular style and earning plaudits as one of the sports saloons of the 2000s. Once the facelift arrived, it came with a sharper front end and a slightly improved cabin, which gave it a much more modern and slightly less chunky look. Inside, there was a bit more technology and a slight improvement in quality, but the XFR's centrepiece has always been the stonking great V8 under the curvaceous nose. This refreshed first generation model lasted until the announcement of the second generation XF range in the Summer of 2015.

Considering that most of the first generation XF line-up was powered by 2.2-litre diesel engines, the XFR and the more powerful, more outlandish XFR-S variant could be described as the only 'proper' Jaguars in the range. With these variants, not only do you get the smoothness of a petrol engine and the burbling exhaust note of a V8, but you also get a 0-62mph time of 4.7 seconds and an electronically limited top speed of 155mph. On the outside, the XFR is subtle, with little to give away its high and mighty status up at the top of the XF range. There are slightly enlarged air intakes at the front, bonnet louvres, red brake callipers, a rear spoiler and a smattering of 'R' badges. Inside, there are 18x18-way electrically adjustable front seats, which are heated, cooled and wrapped in leather, and sporty-looking carbon fibre inserts dashboard. Other standard kit includes the Meridian 825W sound system, front and rear parking sensors and a new infotainment system housing satellite navigation and a reversing camera. Despite the high level of equipment, some of the cars on the used market are likely to come with a couple of optional extras, such as the TV tuner for the infotainment screen, the adaptive cruise control or the interactive voice control.

Unlike Jags of old, the XFR has been fairly trouble-free throughout its life. As ever, though, look for an example in good condition and with a full Jaguar service history. If you can get one with a bit of its three-year manufacturer warranty remaining, that will give you a little more peace of mind. Even if your budget won't stretch to a car with a warranty, buy the car from a reputable dealer and get it looked at by a local Jaguar dealership immediately. That inspection will highlight any faults and you'll be able to take it back to the dealer you bought it from and either get it sorted or get a refund. If an XFR has been 'enjoyed' (there's nothing wrong with that - that's what cars like these are built for), it'll probably have been driven at speed, so there's a good chance of stone chips on the bonnet and tar stuck to the side panels. As long as the chips have been properly repaired and there's no bubbling on the bonnet from moisture that's crept in, it'll be fine.

(approx based on a 2012 Jaguar XFR) Beware that even if you only spend £30,000 on an XFR, you're buying a £65,000 car, so expect to pay the running costs normally attributed to a car that expensive. A set of tyres, for example, will be somewhere between £175 and £200, depending on whether it's a front or rear that goes, and a new set of front brakes with pads is going to cost about £300 before you even think about getting them fitted.

That supercharged V8 up front gives the XFR some serious firepower and, like every XF, there's some tail-out action to be had if you go looking for it (not that we'd recommend this unless you have an empty racetrack at your disposal). Because it's rear-wheel drive however, don't expect those fat tyres to find much purchase in the snow, although in the dry they should stick like glue. When it is dry you'll feel the benefit of the tuned chassis too, with its stiffer springs, electronic differential and sharper steering rack. There's even a 'Dynamic' mode, which will sharpen up the suspension and throttle response, as well as changing the exhaust note by redirecting the gasses past the baffles and silencers. Of course, this is an out-and-out performance car, so don't run around expecting to get decent fuel economy even if you do drive carefully. If you're very lucky, the XFR will return 22.5mpg, so be prepared to spend a lot of time standing beside the car filling it up, rather than actually driving it.

There's no doubt that this XFR could make a very shrewd used buy for those in the market for a superior premium executive-sized sports saloon. It'll hold its value reasonably well, it'll be a hoot on an empty road or a racetrack and it'll probably be reliable. Whether you opt for the pre or post-facelift version is probably down to preference. The older car is cheaper to buy and mechanically identical to the new model, but the later version we've been looking at here has a much sleeker look and a more up-market feel. It makes you feel more special - which is what a car of this kind should be all about. 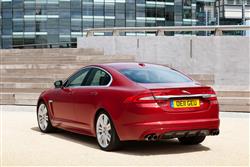 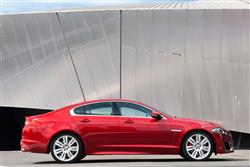 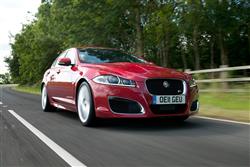 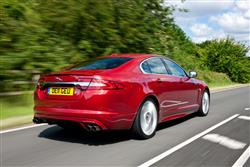 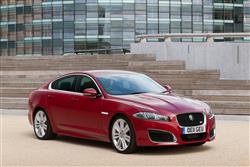 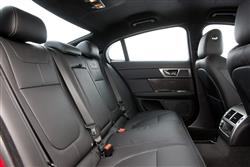