With its fourth generation Rio model, Kia produced a smartly-styled supermini that challenged for class honours and suited sensibly-minded buyers. As a secondhand buy, it's spacious, easy to drive and in entry-level diesel form, very affordable to run. It is, in short, a very competitive car indeed.

In the modern era, some models in the supermini category are for the first time large enough to function as complete family cars. Take, for example, the one we're looking at here, Kia's fourth generation Rio, launched in 2011. It's as big as a turn of the century Astra or Focus from the Family Hatchback segment, the next pricier class up. More importantly, it was the first top class supermini the Korean brand had ever bought us. This was a progression that anyone familiar with Kia had been expecting. The first two generations of Rio were embarrassing but the MK3 model of 2005 was very nearly class-competitive. When the wraps came off the fourth generation version though, it was clear that it was going to be a bit more than that. Here was a car that targeted nothing less than the top of the supermini segment in terms of the things that really mattered to supermini buyers - styling, running costs and everyday practicality. It sold until early 2017, when a new fifth generation version was launched.

So different was this MK4 model Rio from anything Kia had offered in the supermini segment before that the Korean maker should really have given it a different name. Come to this car expecting lowest common denominator motoring and you're going to be in for a rather pleasant shock. Ex-Audi stylist Peter Schreyer penned a shape that was longer, lower and wider than the previous model with a forward-leaning wedgey look and a pronounced coupe-like roofline. For the first time here, Rio buyers got the option of a three-door bodyshape, though it was still the five-door that accounted for three-quarters of all UK sales. The overall look isn't perhaps quite as distinctive as the brand wanted to believe but it's certainly very neat, with an interesting interpretation of the Kia family 'tiger nose' front grille that integrates nicely with the front headlamp units. There's a distinctive feature line along the flanks flowing into a high-shouldered rear end with a sharp rear screen angle. The rear end could have been a bit better thought through as from the driver's seat, it's not that easy to see out of the back, which is a pity as parking sensors were only supplied as standard on the plushest version. That apart though, there's precious little to criticise inside, unless you've an aversion to black plastic. Even if that's the case, you'd have to admit that the quality of the materials is actually very good for an affordable supermini, even if these can't quite match the standards set by the class best. It's a huge improvement on what went before though, signature features like the so-called 'three cylinder' instrument cluster blending with new ideas like the smart toggle switches on the centre console. There are also nice touches with a moulded insert to prevent your 'phone from sliding around and two 12V power sockets flanking jack points for iPods and USB sticks. A reach and rake-adjustable steering wheel on most models along with the height-adjustable driver's seat means that it's possible for just about anyone to get comfortable too. And it's a more spacious place to be than anything the old MK3 model Rio could offer. This car is, after all, just over 4m in overall length, 55mm longer than a Fiesta, with a cabin 25mm wider than that of the car it replaced. The combination of this and the way that the windscreen was moved forward and upwards to create more headroom gives the interior a feeling of size that you'd once have needed an apparently larger Focus-class family hatchback to rival. It's an impression that continues rearwards where a 70mm increase in the wheelbase created 34mm more legroom, ensuring that there's plenty of room for a couple of fully-sized adults in the back, even on longer journeys. Three would be a bit of a squash, as usual in this class of car, but a trio of kids will be quite happy. In short, here's a car that most who buy something larger in the next Focus or Astra-sized class up would be quite happy with - except perhaps, when it comes to the boot. To be fair, the 288-litres on offer is a 7% improvement on what was available in this car's predecessor thanks to a 100mm increase in width, but it's still 20% less than you'd get in something like a Golf. Still, the Rio's capacity is pretty par for the course in the supermini segment and as usual, you can extend it by pushing forward the 60/40 split-folding rear seats. There's also plenty of cabin storage for smaller items including a large 15-litre glove box, a centre console with three litres of extra capacity and door bins that'll hold a 1.5-litre bottle at the front and a 500ml bottle in the rear.

Overall, most of the Rio customers we surveyed were extremely happy with their cars. Inevitably though, there were a few issues we came across. We found an owner who complained of squealing brakes. And another with ignition coil problems. A few cars fitted with navigation have reported a problem where no sound comes out of the stereo speakers. A few issues have been reported of abnormalities with auto transmission models - apparently, this is heralded by a check light coming on on the dash and can be fixed by reprogramming the transmission control module. There was also a report on one car of noise and vibration when the air conditioning compressor was on; this is apparently down to a defective air conditioning compressor clutch assembly. Customers have noted that some of the interior finishes can get scratched quite easily and the alloy wheels fitted to top models are quite easy to kerb. Other than that, it's a clean bill of health. Kia's brilliant seven-year warranty arrangement means that these vehicles very rarely fall into premature neglect.

Accepted wisdom from supposed industry experts like 'What Car' appears to be that Ford's Fiesta leads the supermini sector for models from this era. And since it's not the best value, the best equipped, the most practical or the best packaged small hatch out there, this determination is presumably based on driving experience and handling, the least important small car attribute for most typical buyers. With the MK4 model Rio, Kia designed a supermini around the people who would actually buy it, so it's fair to say that in the design phase, on the limit handling wasn't exactly top of the priority list. Even so, this still manages to be one of the more interesting cars in the class to drive. Which will be a revelation for customers graduating to this model from the previous MK3 Rio. But there won't be that many of them. So what'll you notice if you come to this car more familiar with a commoner supermini - a Vauxhall Corsa, a Peugeot 207, a Skoda Fabia, a VW Polo or, yes, even a Ford Fiesta? Well, drive a Rio for any length of time on our appalling British roads and you'll probably conclude that it rides better than its rivals. Yet there's no major penalty to pay for this when it comes to the twisty stuff. Yes it's true that a Fiesta - but only the Fiesta - is more composed around the corners. The Ford feels sharper to drive too, though the difference between these two cars wouldn't be that great in this respect if this Kia wasn't saddled with a rather vague electric power steering set-up. You'll appreciate this around town though, where it facilitates a tight 10.5m turning circle. Out on the open road, there's more good news. We're pretty sure that there isn't a more refined car than this in the class from this era, which makes this Rio an excellent motorway partner. Gone are the days when you couldn't consider taking a supermini on a very long journey and this one will be a more relaxing companion than most. The 6-speed gearbox is also slick and the brakes are very good too. All of which will almost certainly be more important to potential segment buyers than outright speed - which is just as well for the Rio line-up doesn't offer too much of that. The 107bhp petrol-powered 1.4 looks reasonably pokey on paper, rest to sixty in 11.1s on the way to 114mph being possible unless you saddle this unit with an optional 4-speed automatic gearbox. In practice though, you have to work it almost as hard as the 83bhp entry-level 1.25-litre petrol model, with plenty of gearshifts needed for rapid overtaking or sharp inclines. Predictably better in this respect are the two CRDi diesels. The frugal 1.1-litre unit offers an interesting 3 cylinder arrangement, which gives it a distinctive and not unpleasant thrum. And though on paper, it seems as if it might be a bit gutless with only 74bhp, a rest to sixty time of 15s and a top speed of under 100mph, plus a useful 170Nm of torque, all mean that in practice, you can actually bowl along quite nicely most of the time without stirring the gearbox too much. If you really do find it a bit feeble, then there's the alternative of an 89bhp 1.4-litre CRDi variant that's 2.5s seconds quicker to sixty and better in the mid-range thanks to 220Nm of torque.

It's easy to see why Kia is one of the fastest growing car makers in the world, doubling its global sales over the last few years thanks to a range of models now seriously troubling the European market's established players. This MK4 model Rio was another one that added to their concerns, smartly styled and class-leadingly spacious and efficient. As a result, it could compete head-on with its mainstream rivals - and bettered many of them. This then, was a car that came of age in this guise. No longer was it a supermini people like us would recommend largely because of generous equipment or a modest asking price. True, it isn't the sharpest handling car in its class and there are a few rivals with classier cabins. None though are more practical or more refined and few have a nicer ride - another of the reasons why this could be considered a smart alternative to a larger Focus-class family hatchback. If you're thinking of buying a late low mileage used car in the supermini segment, then you probably won't be considering this Rio as an option. But take it from us; you probably should be. 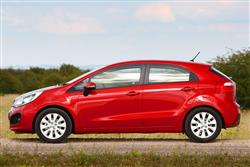 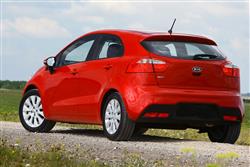 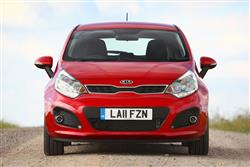 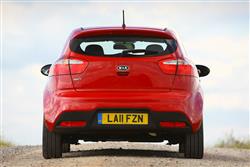 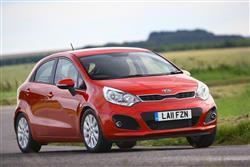 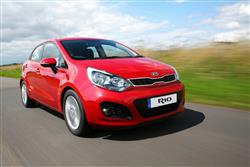