If you thought that all small cars looked the same and a modest vehicle budget precluded any semblance of style, I think you're going to like the Kia Soul. It's a car that's bursting with neat design touches and looks a long way removed from the standard supermini template. Unless you've been living under a rock for the past few years, you'll know that Kia is going places, with some of the most progressive designs of any car manufacturer. Of course, there are a number of people who have missed out on exactly this message, which means that if you're quick, you might be able to nab a used bargain.

The Kia Soul remained surprisingly faithful to the Soulster concept car revealed at the North American International Auto Show in Detroit at the start of 2006. That concept was the inspiration of Kia's North American design studios in California. Eight months later, when Peter Schreyer - the man behind cars like the Audi TT and the Volkswagen New Beetle - became Chief Design Officer at Kia, he oversaw the project through to the final production stage. Launched in the UK in March 2009, the Soul was an immediate hit with buyers looking for something inexpensive but imbued with a little personality. Practical and rugged, it offered a simple trim line up and a straightforward choice between a 1.6-litre petrol engine and a 1.6-litre diesel engine. Since launch, we've seen a number of special edition trim levels appear which have done a reasonably good job of keeping the Soul fresh. A facelifted 2012 model year car was shown at the 2011 New York Show. Retaining the same basic proportions, this Soul featured neater detailing and a more powerful 138bhp direct injection petrol engine.

The Soul might be front wheel-drive but you could certainly be forgiven for thinking otherwise on first catching site of one. The classic 4x4 styling cues can all be ticked off, from the chunky bumpers and flared wheel arches to the roof bars and the setsquare rear end. There's even a plastic vent behind the front wheel that houses the side repeater and could have been lifted direct from a Land Rover. The Soul is only a fraction longer than a Ford Fiesta supermini but its boxy dimensions help it trump any supermini you'd care to mention for interior space. The boot has a huge opening, a usefully high loading lip and compartments beneath the floor, while space in the back seats is also plentiful. Kia's quest to give this model some soul doesn't end with the exterior styling. The interior too shows a level of imagination not normally associated with Korean cars. The plastics quality is open to question in places but the space is light and bright thanks to some extrovert colour schemes. Kia is even venturing down the personalisation route for the first time. Traditional Kia buyers aren't usually of the sort who will dip into the options list for a sports body kit or a Union Jack roof graphic and Kia products tend not to lend themselves to that kind of thing anyway but the Soul dares to be different. Kia has shed its usual reserve in offering a collection of bodywork graphics, interior styling features and even 'eyelashes' that can be stuck on the headlamps to add some personality. Good idea or not, it's not Kia's usual modus operandi.

Make sure the car is in very good condition. There's no reason why it shouldn't be, as it will be within warranty, but you may find a few scuffs or scratches on some of the interior plastics. One advantage of the Soul is that most cars will have had a relatively easy life, the majority of customers using them for shopping trips but do check the bodywork for trolley scrapes or multi-story reversing incidents. Otherwise insist on a full service record and contact a few franchised dealers to try to find the best bargain available.

(approx based on a 2009 Soul 1.6 2) Parts prices are affordable and availability tends to be good. A clutch assembly will be around £110 and an air filter should be close to £14. Brake pads are around £40 a front set with a water pump relieving you of nearly £80.

This car is powered by one of two engines, a petrol or a diesel. Both have a 1.6-litre capacity and both produce around 125bhp which throws the age old petrol vs diesel debate into sharper focus than usual. The petrol option is a little brisker from standstill to 62mph with a 10.4s time compared to the diesel's 10.7s but the diesel will feel stronger in real world driving conditions thanks to its superior torque. It also has the higher top speed, topping out at 112 while the petrol hits the wall at 110mph. The Soul sits its driver in an upright position and gives a decent view out over its stubby bonnet at the front. The C-pillars are chunky affairs and don't help visibility rearward but the Soul's flat back should assist in parking manoeuvres.

The Kia Soul is a fun car that has a practical side to it as well. Used examples are reasonably plentiful, so you can afford to be choosy when viewing potential purchases. The premium for a diesel model isn't huge and the fuel economy benefits make them well worth searching out. Highly recommended. 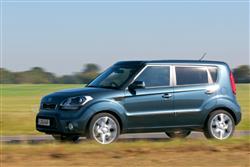 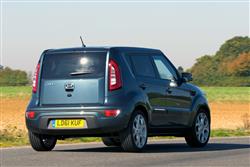 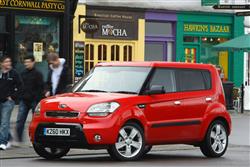 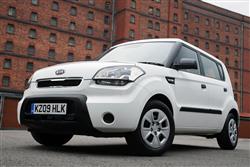