The Kia Soul comes only in all-electric form, so it's just as well that this brand's EV technology has hugely improved in recent times. To the point where almost anyone ought to be able to consider it. There's now also a choice of battery options for Soul EV folk. If you've been waiting for the right moment to join the battery-powered automotive revolution, that time may just have arrived.

You might think that the full-electric car market could be pretty much divided into a couple of kinds of contender. There are relatively affordable ones, like the Nissan LEAF, the base version developed steadily to the point where its lithium-ion batteries can offer up to around 180 miles on a good day. Or for around twice the money, buyers can graduate to the more sophisticated battery technology that luxury models use - cars like the Jaguar I-PACE, the Audi e-tron, the Mercedes EQC and various Teslas. With these, a driving range of around 300 miles or more is the norm. That used to be a reasonable EV buying perspective. But in 2018, the Hyundai/Kia conglomerate turned up on the market with three EV models offering the kind of range you'd get in a luxury EV for the kind of price you'd pay for a more affordable one; namely the Hyundai Kona Electric, the Kia e-Niro and the car we look at here, the Kia Soul EV.

Given that there are now no longer any combustion-engined versions of this Soul, it's just as well that this EV model's WLTP-rated all-electric driving range is quite lengthy - 280 miles, or up to 402 miles in the city. That's with the larger 64kWh battery pack that you get with the top 'Explore' model. The entry-level 134bhp 'Urban' variant has a smaller 39.2kWh battery pack, with a driving range of 171 miles - or up to 252 miles in a city setting. The 64kWh version is the one you'd ideally want and with 201bhp, it makes 62mph from rest in 7.6s en route to 104mph. For the 39.2kWh version, the figures are 9.9s and 97mph. On both Soul EVs, the suspension has been carefully worked on to try and deal with the effects of this car's rather prodigious 1,757kg kerb weight. Not enough to make this car feel anything like a satisfying steer through the bends though. The rather vague steering doesn't help here either. As with the Niro EV, the most impressive aspect of this Soul's powertrain lies with its adjustability. That's thanks to the provision of different driving modes (Normal, Eco, Eco+ and Sport) and the ability to change the amount of regenerative charging the car develops under braking. This regenerative set-up can be controlled through steering column-mounted paddle shifters, and once you've adjusted to it, it's straightforward to use.

If you happened to like previous versions of the Soul, you'd probably recognise this third generation model, which adds a more modern feel with a front end shaped by narrow lights and a trapezoidal grille. The rear features an LED light strip that wraps almost all the way around the rear screen. It's intended to be distinctive and needs to be to mask the boxy shape which is bigger this time round. This MK3 model measures in at 4,195mm, 55mm more than its predecessor. It's also 1,605mm high and 1,800mm wide and has a 2,600mm wheelbase that's 30mm lengthier than before. That's not enough to enable this Kia to offer more luggage space than its EV cousin, the Kia Niro EV (315-litres as opposed to 495-litres), but the Soul has an arguably nicer cabin and its higher roofline makes the interior seem much airier. There's also plenty of tech, with the 64kWh model featuring a smart 10.25-inch version of the brand's centre-dash touchscreen and a head-up display. One particularly nice touch is the provided button that enables you to control heat or chill only the driver's portion of the cabin if you're one-up and need to maximise range. The rear seat benefits from this MK3 model's 30mm increase in wheelbase length and the Soul's boxy dimensions, making this rear bench feel far more spacious than more conventionally styled comparable compact hatches with a similar roadway footprint.

Prices start from just under £33,000, which gets you the base 39.2kWh Soul EV 'Urban'. You'll need around £39,000 for the 64kWh Soul EV 'Explore' variant. Even the 'Urban' comes well equipped, with 17-inch alloy wheels, LED headlights and a reversing camera, plus Adaptive Smart Cruise Control and an 8-inch centre touchscreen. 'Explore'-grade adds roof rails, an SUV styling pack, rear parking sensors, black leather upholstery, privacy glass and a larger 10.25-inch centre infotainment screen. You also get plenty of safety tech across the range, including a head-up display, adaptive cruise control, lane-keeping assistance and blind spot monitoring. There are plenty of EV rivals in this part of the market, but most of them are unable to match this Soul's driving range. For a little less, there's Renault's ZOE or a Vauxhall Mokka-e. Nissan LEAF would cost quite a lot less too in its volume form, but you'd actually need that car in its uprated 62kWh 'e+' guise to match this Kia's driving range - a variant that costs around the same as a Soul EV 64kWh. BMW's i3 costs significantly more.

Many potential customers love to fire up their spreadsheets and produce some involved calculations that attempt to answer the question of whether the electric model will work for them better than a diesel or petrol version over a representative ownership period. So let's see. We've already mentioned the 64kWh 'Explore' model's 280 mile WLTP-rated driving range and the 39.2kWh 'Urban' variant's 171 mile range. Obviously, to get anywhere near these official quoted range figures, you'll need to be using the two most sensible of the provided driving modes - 'Eco' or, ideally, 'Eco+', both of which slightly restrict throttle travel and climate system performance, the latter, majorly so. You'll need to maximise brake regeneration using the steering wheel paddles. And you'll also want to keep an eye on the drive indicator to the left of the instrument binnacle screen, staying in the lower blue 'Charge' zone and out of the upper white 'Power' section. The central part of the instrument binnacle display offers a selectable 'Energy Flow' monitor and a 'Driving Style' read-out which rates your driving in % terms in 'economical', 'normal' and 'dynamic' categories. You'll want to know that this Soul EV's charging times stack up to segment standards. Pretty well as it turns out. It's possible to replenish the 64kWh model's lithium-ion cells with a charge of up to 80% in just an hour and a quarter, providing you've got access to a 50kW DC fast charger. If you haven't, then a 7.2kW home wallbox will re-charge a Soul EV 64kWh completely in 9 hours 35 minutes. If you're somewhere with only a normal 3-pin plug 220V AC power supply to connect into, it'll take a yawning 31 hours to top the 64kWh variant up completely. If you can find a fast-charging 100kW charging station, that bigger battery can reach 80% of charge in only 54 minutes. Obviously, for the smaller 39.2kWh battery in the 'Urban' variant, the charging times are a little quicker. It can take just 54 minutes to recharge that smaller battery pack from 0-80 per cent using an 80kW rapid charger, while a 7.2kW home charger will replenish the battery from 0-100 per cent in 6 hours and 10 minutes. For owners without a dedicated home charger, a domestic plug socket can recharge the Soul EV 'Urban' from 0-100 per cent in 18 hours.

Car manufacturers are now getting a lot smarter when it comes to developing electric vehicles, something ably demonstrated by this Soul EV. Range anxiety used to be a sensible reason for not buying a full-battery-powered model but these days, that's becoming less of a credible excuse. For the majority of people, the 280 mile range figure offered in this Soul EV's 64kWh form will be quite sufficient. And though this Soul still costs quite a lot more than you'd have to pay for an average family hatch to buy, you'd quickly start making the premium back in day-to-day use. In a Volkswagen ID.3, you'd get an arguably classier interior. In a Nissan LEAF, you'd get more rear seat passenger space. But you'd have to be looking at the very priciest versions of both these cars to match the driving range the top version of this Soul EV can offer. And neither is quite as trendy to look at as a Soul, though of course, that's a matter of opinion. One thing's for sure: if you're serious about EV motoring, this car's a serious contender. 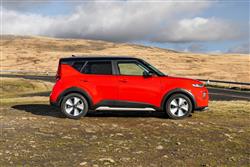 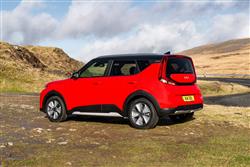 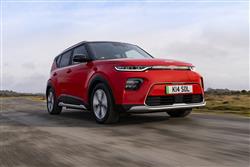 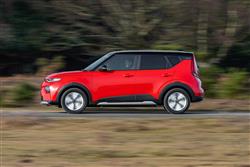 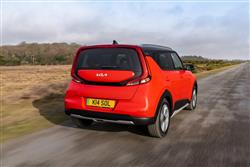 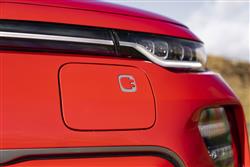