The fourth generation version of Kia's Sportage family Crossover model built on the step forward its predecessor made, in 2016 offering the mid-sized SUV market strident looks, more accomplished driving dynamics and a much nicer cabin. It's a car that customers in the Qashqai-class liked. Let's check it out as a used buy.

For most car makers, it's merely very important these days to have a credible range of SUV Crossover models on offer in the showrooms. For Kia though, the provision of such thing is fundamental to its fortunes, the brand increasingly associated with this car, the Sportage. It's a spacious family-sized Qashqai-class model that we're going to look at here in the original post-2016 version of its fourth generation guise. The earliest Sportage model dates back to 1993, but it wasn't until the launch of the third generation version in 2010 that buyers began really taking it seriously. More than any other model, the MK3 design turned Kia's fortunes around - to the point where by the time of the launch of its successor - this car - in early 2016, the Sportage was accounting for nearly a third of the brand's total sales volume in this country. So the Koreans had to get this car right. Did they? Pretty much. The styling aimed for a more up-market Germanic feel, something you'll also find in the ergonomic cabin. Plus, big steps forward were made in terms of electronic safety provision and media connectivity. Under the bonnet, there were fewer changes with this MK4 design, but a potent 1.6-litre T-GDI petrol turbo powerplant was added to the range, one of the key engines buyers could order with the line-up's sportiest 'GT-Line' trim level. With that variant, you get a look properly reflective of handling changes to steering and suspension that aimed to give all models the kind of firmer, more dynamic feel that Kia thinks Crossover customers want. The original version of this MK4 Sportage sold until mid-2018, when it was significantly updated. It's the earlier version of this design we look at here.

Do you like it? It's important to Kia that you do because looks were high on the list of reasons why customers bought the previous generation model. This fourth generation version doesn't perhaps quite have the elegance of that car but arguably, a bit more streetside presence was introduced this time round, particularly at the front end, which seems to remind many of a junior league Porsche Cayenne. Once behind the wheel, you'll find a driver-centric fascia that's angled towards the driver, with flush-fitting fixtures and trim, soft-to-the-touch materials and smart detailing like the silver trim used around the air vents. It's a big step forward from the cabin of the previous model, which wasn't really able to match the sophistication of the exterior styling. Helping in this regard is a reduction in the number of switches and buttons thanks to the installation of a smart centre dash infotainment touchscreen, a standard feature providing you avoid entry-level trim. In the back, you'll find the seats to be more comfortable in this MK4 model than they were in previous versions. They offer firmer side supports and softer foam, plus in the rear they recline for greater comfort on longer trips. As for boot space, well raise the slightly heavy tailgate and you'll find a cargo area that rose by 26-litres in size with this MK4 model - to 491-litres with a temporary spare wheel in place, a feature that was standard across the range, providing you avoid the entry-level 1.6-litre petrol engine.

Almost all the owners in our MK4 Sportage survey seemed very happy with their cars, but inevitably, there were a few issues. One buyer complained of a clutch judder (which apparently is a known issue) and an engine misfire. One owner said the steering wandered on the highway, guided by the tyres (check on your test drive). And we had issues reported concerning the central locking and the infotainment screen. One owner had his car stall and revert to 'limp home' mode. And another reported rattles in the rear cabin and an auto gearbox that tended to hang on to 4th & 5th for too long. Otherwise, check for the usual things - underside damage, scratched alloys and interior child damage. And insist on a fully stamped-up service history.

Kia stiffened the chassis of this fourth generation model, while re-tuning the suspension and redesigning the steering system, all in pursuit of a firmer, sportier, more European-feel at the wheel. If that's what you want, then that's what this Sportage delivers: just be aware that the experience is very different to what was on offer previously. There's far less change beneath the bonnet, the engine line-up including basically the same options as with the previous MK3 version, though the units in question were updated to meet more efficient Euro6 standards. As a result of that, the 114bhp 1.7-litre CRDi diesel derivative is capable of 61.4mpg on the combined cycle and 119g/km of CO2. Diesel drivers wanting all-wheel drive or the option of automatic transmission will need to stretch up to one of the 2.0-litre CRDi models - there's a choice of 134bhp or 182bhp outputs, both only offered with 4x4 traction. For petrol people meanwhile, there's a budget-orientated front-driven 130bhp 1.6-litre GDI variant at the foot of the range. Or a pokier 174bhp T-GDI petrol turbo model if you're able to stretch to the sportier 'GT-Line' trim level.

Expectations were high for this fourth generation Sportage - and it satisfies many of them. It's certainly a confident car, firm in stance, in ride and in the value proposition it offers - exactly in fact, the sort of thing many Qashqai-class buyers will be looking for. Yes, you could pay much more for an SUV of this kind. But after trying this Sportage, you might well end up questioning the need to. Which says it all really. 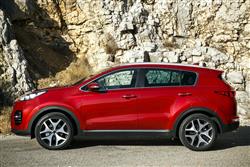 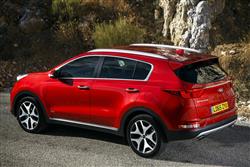 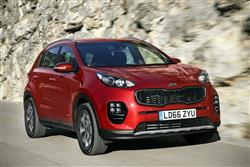 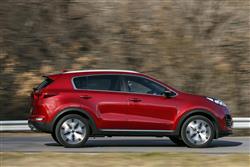 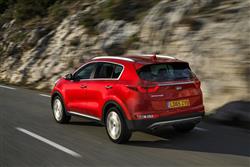 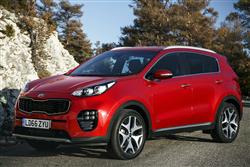