Kia hugely improved third generation Sportage managed to steal sales from both Qashqai-like Crossovers and RAV4-like compact SUVs. With design flair matched to engineering sophistication, it proved to be a very complete - and very desirable - family car. But how is it as a used buy?

Crossovers - Nissan Qashqai-like family hatches with car-like dynamics and running costs that belie their SUV-like looks and optional 4WD - are big business in Britain these days. From almost nowhere a few years ago, this class of car now accounts for nearly 10% of the UK market. Such a lucrative sector is it that today, we have all kinds of models claiming to be 'Crossovers'. Some, like the Qashqai of course and Peugeot's 3008, clearly are more family hatch than 4x4. Others, like Ford's Kuga and Skoda's Yeti, look far more like the kind of model that until a few years ago, we would have classified as a soft-roading compact SUV, slightly more car-like alternatives to a Toyota RAV4 or Honda CR-V but still very much 4x4s. Here's another to add to that particular list, Kia's third generation Sportage. It's billed as a 'Crossover' but looks - and feels - more like a less politically correct small SUV. But whatever you call it, here's a car that represented a big step forward for the Korean brand. Launched in 2010, this Kia had almost nothing in common with its dumpy, unappealing predecessor - and was all the better for it. SUV-like it might be, but it delivers its virtues in a strikingly designed package that proved to be much easier for many ordinary buyers to live with than any RAV4, CR-V or Freelander. Most of those people were quite happy with the 2WD models that made up the majority of the range, but as all-weather, all-wheel drive family transport, the 4x4 versions also have plenty to offer. Ultimately, what this car claims to represent is a design that blends the best features of Qashqai-like Crossovers with RAV4-like soft-roading small SUVs. It sold until early 2015 when it was replaced by an all-new fourth generation version.

We're finding it hard to think of another car that in just a single generation could be said to have progressed aesthetically quite as far as this one did from MK2 to MK3 model status. In 2010 with this third generation Sportage's launch, dull functionality was replaced by a longer, lower, wider and lighter rakish package that was - and still is - arguably better looking than any other car in this class, with its trademark Kia 'tiger nose' grille, sculpted flanks, raked back C-pillar and sharply angled rear window. It's a shape that was designed in Germany by ex-Audi stylist Peter Schreyer, the creator of the original Audi TT, this being the first Kia he was able to pen entirely from scratch. The interior too clearly had some attention spent on it above and beyond what you'd normally expect at this price point. As you'll find if you look hard enough, the designers clearly had some cost restraints to work to but on first acquaintance with the cabin, you really don't notice the fact, the over-riding impression instead being of crisp, clean quality, with everything seemingly very nicely screwed together by the Czech factory. The cowled instrument cluster with its big centrally-mounted speedometer is clear and effective and there's tonnes of adjustment for both the driver's seat and the steering wheel. Storage space includes a 6-litre centre console bin, large door pockets and a glovebox that's air-conditioned on some models. In the back of this five-seater-only design, though rear occupants can't slide, recline or remove their seats, they do at least have reasonable standards of head and legroom for a car of this class - or at least they will have if there are only two of them. It certainly feels an airy place to sit, even if your Sportage doesn't feature the panoramic glass roof that's standard on plusher variants. That's thanks to the clever reverse-angle for the C-pillar that offers a clearer view out. Out back, the 564-litre boot is large and well shaped and is impressively big for a vehicle only 9mm shorter than a Vauxhall Astra. Push forward the 60:40 split-folding rear seats to extend the capacity available and although you'll find that they don't fold completely flat, the 1353-litre total capacity will be welcome.

Our surveys found a mostly satisfied bunch of Sportage owners. We did come across a few who had issues with electronics, specifically the TFT screens. Be various suspicious of anything that looks like it may have gone off road - this car really wasn't built for that. And look for the usually interior trim tears and scuffed alloys. Other than that, it's a clean bill of health. Kia's brilliant seven-year warranty arrangement means that these vehicles very rarely fall into premature neglect.

(approx prices, based on a 2013 Sportage 1.6 GDI 2) Kia spares prices have gained an enviable reputation for good value, and replacement parts for the Sportage are no exception. Brake pads are between £27-£35 for cheap brands and between £45 and £50 if you want an expensive make. Brake discs start in the £60 to £90 bracket, but you can pay much more for pricier brands. A drive belt is around £25. Air filters sit in the £13-£15 bracket. A fuel filter can be as little as around £30. Oil filters cost between £3 and £7 depending on brand. A water pump is around £50, but you can pay between £70 and £90 for pricier brands. On The Road

Behind the wheel, the feeling is far more RAV4 and Freelander SUV-like than the more ordinary family hatch-like feel of the Nissan Qashqais and Peugeot 3008s that Kia says this car competes against. A lot of buyers will think that a very good thing. It's certainly impressive the way that the designers have managed to combine a commanding driving position with a seat that's easy to slide in and out of. High-sided flanks, a nose invisible from the driver's seat and a small rear window do make this a car that demands a little adjustment if you're trading up from something more conventional, but once you adapt, you should find this Sportage to be an easy thing to live with. Of course, you won't need us to tell you that this car isn't intended for those planning a jungle expedition. At the other extreme, it'll be equally ineffective if you want to corner Lewis Hamilton-like on your door handles, a pastime far more suited in this sector to cars like Ford's Kuga or Nissan Qashqai. So what exactly does it offer? Well, something that's probably far better suited to the kind of driving that most potential family buyers will actually do. This Kia offers a softer, more relaxed approach that balances body control, handling response and ride comfort aided by hi-tech multi-link rear suspension in a way that we've found to be very impressive indeed. If the Koreans had been able to make the variable assistance power steering a little more feelsome, it would have been even better still. Entry-level 114bhp 1.7-ltre CRDi diesel and 133bhp 1.6-litre GDI petrol models feature two-wheel drive only: we'd recommend the livelier feel of the petrol variant, its rest to sixty capability of 10.7s making it one of the fastest MK3 Sportage variants you can buy. Further up the range though, where you'll need to venture if you want automatic transmission or 4WD, diesel's a firmly better bet, provided by the 134bhp 2.0-litre CRDi diesel. This is basically a detuned version of the 2.2-litre unit used in Kia's larger Sorrento, which means that it's very good indeed, smooth and responsive, even if it doesn't boast the ultimate power output featured by some of its direct rivals. Sixty from rest is 10.9s away en route to 112mph, a performance return very similar to that of the much thirstier and therefore minority interest 161bhp 2.0-litre petrol model, the only variant with a manual gearbox featuring five rather than six-speeds.. Both these models feature a clever Dymax intelligent 4WD system developed by experts at Magna Steyr and said to be more responsive than the system used on the Hyundai ix35 that's otherwise basically pretty much the same as this car underneath the fancy panelwork. Kia's very proud of Dymax, emphasising its 'intelligent' aspect that enables the electronics to anticipate when all-wheel drive will be needed, rather than simply reacting to changing road conditions as other similar but less sophisticated systems do. Should conditions turn slippery, your Sportage will switch automatically from being totally front-driven to being all-wheel driven, with up to 40% of its torque pushed towards the rear wheels. Should you get your car somewhere it really oughtn't to have been in the first place, there's also a lock mode that divides torque equally 50/50, front-to-rear, giving you a fighting chance of easing your way out, assuming that you don't fall foul of the reduced ground clearance that's a feature of this Mk3 model. All Sportage models have Hillstart Assist Control to help with uphill getaways and Downhill Brake Control to provide reassurance on steep descents.

Provided that you're not expecting a really sporty Crossover or an off-roader in the traditional sense of the word, it's hard to see how this MK3 model Kia Sportage would disappoint. It's well built, it rides well, there's a strong range of engines, a choice of front or four-wheel drive and - the clincher for many - it looks great. This South Korean brand has made huge strides in terms of design sophistication, engine efficiency and marketing savvy in recent years, all of which is reflected in this car. With Kias of the past you used to need a spreadsheet to explain the rationale behind your buying decision. Now all you need is a photo. 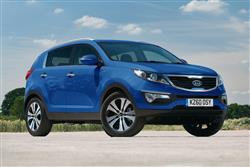 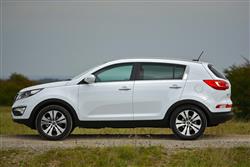 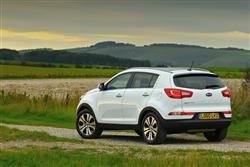 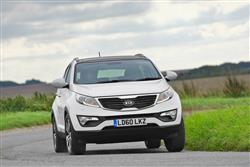 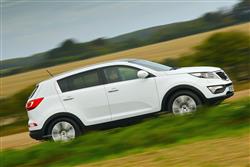 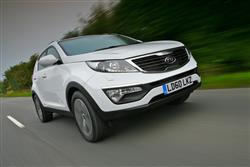