Chart the history of Land Rover and it hasn't always been smooth sailing. There have been periods when the company has turned out some fantastic products and then there have been years spent in the automotive doldrums. Many industry commentators felt that when the company was divested from Ford's Premier Auto Group in 2007, it was the beginning of the end. The new owner, TATA Motors, had no record of managing a prestige brand and little in the way of automotive track record to call upon. Sometimes it's great to be proven wrong. That acquisition saw Land Rover go from strength to strength. In 2010 we got the fourth-generation Discovery. In 2011 the brilliant Range Rover Evoque debuted and instantly became the best-selling car in its class. The fourth-generation Range Rover appeared in 2012 and in 2014 we got perhaps the biggest surprise, the replacement of the Freelander with the seven-seat Discovery Sport. Demand for this vehicle has been stratospheric and the first batch of cars were all sold with the 190PS SD4 diesel engine, carried over from the Freelander. Here's what to look for when tracking down an early Discovery Sport.

The Land Rover Discovery never did sporty at all well. It had a vast array of other qualities that put it right near the top of the family 4x4 tree but on-road dynamics were never one of its big draws. If you wanted a car that handled a bit better, you graduated to the Range Rover Sport, a car that shared plenty of the Discovery's underpinnings but which featured suspension that was geared a little more to the keen driver. In 2014, Land Rover proved there was another way. If the Evoque wasn't big enough and a Range Rover Sport just too expensive, why not try the Discovery Sport? Brought into the range to pension off the Freelander and featuring 5+2 seating, pricing that looked sensible, and some very sharp styling, it was another instant winner from Land Rover. Unfortunately, Land Rover didn't quite have all its ducks in a row for the launch of the Discovery Sport. The original plan was for the car's unveiling to coincide with the development of its next-generation 2.0-litre TD4 Ingenium diesel engines, but the Ingenium project slipped. Land Rover had a choice: either hold the Discovery Sport launch back a year or launch it with the older 2.2-litre SD4 engines and risk some adverse press reaction. It bit the bullet and plumped for the latter approach. So, despite the better TD4 engine option, is it worth buying an early used SD4 model?

Even if you'd never seen a picture of the Discovery Sport, you could probably generate a reasonably accurate mental sketch of it were you to imagine crossing a Range Rover with a five-door Evoque. It's a really handsome piece of design work that instantly makes even a good-looking rival like the Volvo V60 look old. It also serves to make the conservative Audi Q5 look positively lumpy. The wheels are pushed nicely to each corner and there's that distinctive canted forward C-pillar profile that became such a Freelander signature. Land Rover describes the seating arrangement as '5+2' rather than a full seven-seater; that's because the rearmost seats are designed largely for kids and occasional use. The middle row of seats can be reclined, slid back and forth by 160mm, and also splits 60:40. They're also 5cm higher than the fronts, which affords a good view out. Boot space measures a useable 195-litres with all seats up, but the Discovery Sport is likely to spend most of its life in five-seat mode, in which case you get a massive 830-litres. Fold both second and third rows and you can carry up to 1,698-litres. Across the range, buyers are offered the choice between four trim levels - SE, SE Tech, HSE and HSE Luxury. Whatever your choice, all variants come with permanent 4WD. As for equipment, well entry-level SE trim gets you part-leather seating, climate control, a heated windscreen, cruise control, and the inControl Remote. This last piece of kit allows you to access all sorts of vehicle information via your smartphone. You can find your way back to the vehicle, check if the windows or doors are open, check fuel level and range, and even summon emergency assistance if required.

Although the Discovery Sport is pretty capable in the rough stuff, it's nowhere near as sturdy as a non-sport Discovery. For a start, it lacks a low-range transfer case and the rear overhand is quite long, so it is possible to get yourself a bit stuck if you get too keen with your off-roading ambitions, so check the car over for signs of underbody damage. The SD4 engine is a tried and tested piece of kit, its lineage being traced right back to the Peugeot/Citroen DW engine series that was used by Ford and marketed as a Duratorq in 2008. If you're test driving the car on a cold day, don't be afraid if the Stop/Start system fails to kick in. The engine is programmed to keep running at temperatures below three degrees Celsius.

The Discovery Sport didn't go big on powerplant choice when it first appeared. You could only choose the carry-over 190PS 2.2-litre SD4 diesel unit. This is good for 420Nm of torque and drives the car through 62mph in just the car a 0-60mph time from 8.9 seconds if you choose the nine(!)-speed automatic or 10.4 seconds if you choose the manual dawdler. It's only offered with four-wheel drive running gear. As you would expect from Land Rover, the Discovery Sport has been developed to do well in the dirt and it features a 600mm wading depth, a four-setting Terrain Response system, hill descent control, roll stability control, dynamic stability control, traction control and engine drag torque control. Even without that low-range transfer case and with the added rear overhang required to house the extra pair of seats, it's better than practically any of its rivals. The bodyshell is largely shared with the Evoque, while the compact suspension design frees up space for the rear seats while still offering a decently-sized boot. The steering is also electrically power assisted, which gives the choice of a self-parking option should it be required.

It doesn't seem so long ago that we were lauding the arrival of the SD4 engine as the saviour of the Freelander range. How time flies. Now it's been superseded by the TD4 Ingenium motors, it's tempting to consider this first batch of Discovery Sports as something of an anomaly. They're anything but. You're still getting a 4x4 with a grunty 190PS engine that generates stacks of torque, yet will still return 46.3mpg in manual guise and 44.8mpg for the nine-speed auto version. That's not a bad deal for something that gets to 62mph in below 9 seconds and can seat seven. We've had egg on our faces when predicting the future where Land Rover is concerned, but we're probably not going out on a limb by stating that these SD4 models look like the value pick for used Disco Sport buyers. 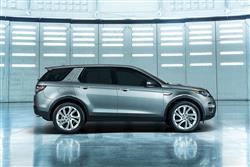 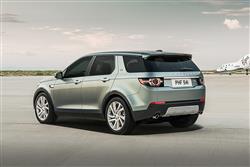 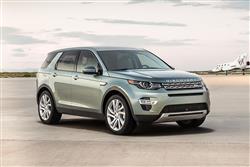 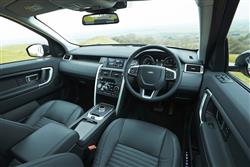