As a company, Land Rover might be better known around the world for its Defenders and Range Rover models, but there's no more accurate barometer to the health and strength of a company than its entry-level cars and for some years now, Land Rover's baby has been the Freelander 2. That it has become the benchmark against which all others are judged is testament to the success it has enjoyed. It's a model that's been continually improved as well, and the version we take a look at here is the 2011 model year car which was unveiled at the tail end of 2010 and lasted right through to its replacement by a version that was further facelifted and brought to market in August 2012.

The Land Rover Freelander 2 first went on sale in the UK in 2006, but such has been the pace, not only of development of the vehicle but the economic background in which it's been sold, that the Solihull brand had to work constantly to improve and tune its offering. Having survived the worst years of the credit crunch in 2008 and 2009, Land Rover was actually in reasonable shape during the period of sale of the car we look at here. In 2010, the Freelander 2 led an increase in company sales, with new registrations up nearly 40 per cent on the previous year - primarily thanks to the small but significant upgrades made to the version we're going to look at here, produced between 2010 and 2012.

At the front where the door mirrors are 10% bigger, there's a sleeker bumper assembly incorporating restyled front fog lamp bezels and revised Halogen projector headlamps flanking a smarter front grille that's darkly painted on TD4 models but more brightly finished on plusher SD4 variants. At the back, there are revised rear tail lamps either side of a bright full width trimmed strip. Rear seat accommodation is miles better than was offered by the first generation Freelander, but it's still only average by the standards of the current compact SUV sector and three burly adults would certainly be a squash across the back seat on anything other than shorter journeys. Still, that's also true of most rivals. There is decent luggage room - between 755 and 1670-litres, depending on whether you're using the rear seats which fold down neatly. It's a pity the rear window glass doesn't open so you could chuck in small bags without lifting the tailgate but there's a long flat load bay, plus there's a retractable luggage blind.

The Freelander used to have a distinctly second rate reliability record, but the Freelander 2 has improved things by leaps and bounds. Check if a tow bar has been fitted and also check the tyres for odd wear patterns. Although the Freelander 2 is very capable off road, there are limits to its ground clearance so inspect the underside for signs of damage to the suspension, exhaust and front valance. The diesel engine is a tough unit and if you're test driving the car on a cold day, don't be afraid if the Stop/Start system fails to kick in. The engine is programmed to keep running at temperatures below three degrees Celsius. The lower dash plastics can scratch easily and make sure the glove box hinges are still in requisite order.

(based on 2011 Freelander TD4 - approx excl. VAT) Mirror glass retails at £20 for the flat panel and £25 for convex glass. Tail light bulbs are just 29p a pop, and a lamp assembly for the rear number plate is £10. An auxiliary drive belt is £15 and oil and air filter elements are £7 and £6 respectively.

This SUV's commanding driving position is one reason why so many like it, your perch offering a fine view out over the flat, square-edged bonnet. Beneath that, all models get an upgraded version of the familiar Peugeot/Citroen-derived 2.2-litre turbodiesel, featuring a hefty 420Nm of torque - 20Nm up on before, so pulling power is plentiful enough to allow for a useful 2,000kg braked towing weight. It's a unit offered in 150PS form to TD4 customers (who can choose either 6-speed manual or automatic transmission) or with 190PS in the top SD4 guise that comes with an auto gearbox only. Even so, this version is still able to significantly reduce the 0-60mph TD4 sprint time from 10.9s to 8.7s and raise the maximum speed from 112 to 118mph. It's the TD4 Freelander that most will choose though and here, there's an option was once quite unthinkable in any Land Rover product: 2WD. With 23% of the European compact SUV segment now based around 2WD models, this wasn't an area of the market that Land Rover could continue to ignore, especially as incorporating it enabled the Freelander to take on Qashqai-class Crossover pretend 4x4s as well as RAV4 and CR-V-sector soft roading compact SUVs. But isn't buying one of these without all-wheel drive rather defeating the point? Land Rover says not, pointing out that their 2WD Freelander eD4 has the same underbody protection, sump guard and great ground clearance as the 4WD model. With a set of winter tyres fitted, you might not even notice any difference in a cold snap. Most buyers though, will understandably continue to want the usual full-time intelligent 4x4 set-up that, as ever, is based around a sophisticated Haldex centre differential that channels drive mainly to the front wheels but can direct it rearwards as and when needed. All but entry-level 4WD variants got Land Rover's excellent Terrain Response system which, via a rotary knob on the dashboard, allows the driver to select a drive programme to match the sort of off-road conditions the car is experiencing. The settings are 'normal', 'grass/gravel/snow', 'mud/ruts' and 'sand' and once you've chosen one, the car's electronics work out how best to dole out power and maximise traction, turning the Freelander 2 into a far more capable off-road tool. A nice touch is a display panel with a diagram showing the front wheels' steering angle, useful if you've become disorientated on a seriously muddy track. There's still no low range transfer case, which may scrub this Land Rover from the shortlists of those who want something really rough and ready, but it's still true to say that no other car in this class can get close to this one's off road abilities. Ground clearance is 210mm, one reason why it can wade through over half a metre of water, while the 31-degree approach angle, the 23-degree breakover angle and the 34-degree departure angle are all excellent. If you are going to be testing that out, then you'll be glad of the sophisticated Gradient Release Control system, a logical extension of the old Hill Descent Control system for descending steep and slippery slopes.

Choosing a Land Rover Freelander 2 really shouldn't be a tough decision. If you want a small 4x4 that can cut the mustard off-road, look no further. The Freelander 2 we saw between 2010 and 2012 added more strings to the bow of this practical design though. The addition of a controversial front-wheel drive model broadened the range and allowed some customers who didn't think they could afford a new Land Rover to join the party. Then there was the extra power and luxury of the top SD variant that enabled this car to take the fight towards plusher compact SUVs like Audi's Q5 and BMW's X3. Both 2WD and top SD Freelanders make great used buys as you can be fairly sure the cars haven't been put through the wringer off road. Go for a mainstream TD4 4WD version and you'll find that there's a good deal of used stock on the market, so if you really want to get the best prices, you'll need to negotiate hard and don't be afraid to walk away. 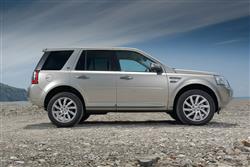 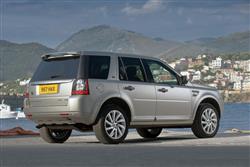 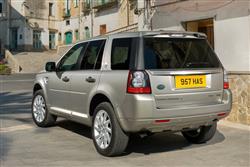 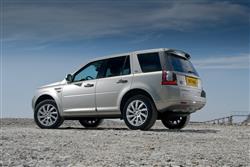 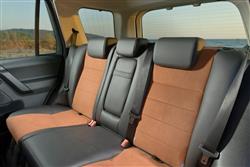