The hybrid IS 300h is Lexus' riposte to not having a diesel offering in the compact executive sector. It's quite an argument - as Jonathan Crouch reports.

The Lexus IS 300h is different. While the German marques play catch up with hybrid technology, Lexus is pushing the game forward with a car that has its own identity and is all the better for it. And did we mention 97g/km and 67.3mpg? Still want that diesel?

Almost everything about the Lexus IS is different from the norm in its chosen compact executive saloon segment. The styling, the single four-door bodystyle, the absence of manual transmission and, perhaps most notably, the fact that no, you can't have a diesel. Here instead, you get a unique four-door look, an auto gearbox and an overwhelming emphasis on petrol/electric hybrid power with its sensible running costs and limo-like silent start-up. It was a unique approach we nearly didn't get. Back when work on this design first started in 2008, the global recession was tempting Lexus back to the badge engineering of Toyota models, which would have made this a plushed-up Toyota Avensis. Thankfully, common sense prevailed and what we've ended up with is much more than that - a car to change your mind: about hybrid power, German brand domination - and Lexus itself. Let's try it.

The IS300h is the variant that attracts all the interest in the IS line-up. Unlike the brand's slightly smaller CT 200h hybrid model, it's more than a smartened up Toyota Prius, instead based on a proper large Lexus, the BMW 5 Series-sized GS 300h. True, the 2.5-litre engine used may only offer four cylinders but it does develop 178bhp, with a further slug of power contributed by an electric motor, resulting in a combined 223bhp output. That's enough to easily match the performance of the rival 2.0-litre diesel models at which this car is aimed, 0-62mph occupying 8.3s on the way to 124mph. Why just 124? It's down to use of a special geartrain for the electric motor that reduces weight and cuts friction in return for restricted flat-out pace - a reasonable trade off in our book. After all, when was the last time you drove quicker than 120mph? If you are going to be driving this car hard, then you'll find that the rubber belt-driven CVT 6-speed auto gearbox (installed because the ordinary IS250 model's conventional mechanical unit didn't fit) can start to frustrate attempts at meaningful progress. We've yet to drive a CVT auto that responded to the throttle (and in this case the gearshift paddles) in the way that it should - and here, the same issues remain. Plonk down your right foot and there's a noticeable pause before the transmission adjusts its gearing, after which there's another thrashy gap between the revs rising and the pace increasing. Still, you quickly adjust.

Changes to this improved third generation IS are subtle but significant. Buyers get restyled headlamps, larger and deeper air intakes integrated in the bumper and a further evolution of the signature Lexus spindle grille. In profile, the character line along the side of the car has been made stronger and at the rear, chrome detailing has been added to the lower bumper panel. The rear lights have also been redesigned, with LED lamps and smarter light guides that create an L-shape motif. Inside, the high-resolution multi-information screen that accompanies the Lexus Premium Navigation system has been increased from seven to 10.25 inches, presenting larger, clearer images and providing a split-screen function so that different information displays can be presented at the same time. Changes have also been made to the steering wheel (matching the design of that in the Lexus RC coupe) and the driver and front passenger knee pads now run the full length of the centre console. There are also new cupholders, a satin finish for the gear lever, a larger, leather-wrapped and stitched palm rest for the Remote Touch Interface control, and classier dial markings on the analogue clock. Otherwise, things are much as they were before, which means a classy cabin with best-in-class standards of kneeroom at the back. And the boot? Well the batteries that must be housed beneath its floor in the hybrid IS 300h model rob you of 30-litres of space, but that still leaves a class-competitive 450-litres of room on offer. And, as long as you avoid entry-level trim, there's a 60/40 split-folding rear seat for those times when you want to avoid the home delivery charge after a trip to IKEA.

The IS300h range is these days actually quite affordable. You'll now pay from around £30,000 for this car and there's a choice of 'SE', 'Executive Edition', 'Sport', 'Advance', 'Luxury', 'F Sport' and 'Premier' trim levels. Across the range, you can expect to find features like cruise control, a smart entry and start system, dual zone air climate control and power-fold heated mirrors. Then there are HID headlights with dusk sensing, eight airbags, plus a DAB digital radio and Bluetooth connectivity. Lexus is particularly keen to promote the plush 'Advance' level, which takes the existing 'Luxury' grade as its starting point, adding the Lexus Navigation system, leather upholstery, heated/ventilated electrically adjustable front seats and a reversing camera to the specification. For around £33,000, it's a decent package. In other respects, the 'Advance' specification matches the 'Luxury' grade in providing front and rear parking sensors, 17-inch alloy wheels, dusk-sensing HID headlights, cruise control, an auto-dimming rear view mirror, dual-zone climate control and rain-sensing wipers. Avoid entry level trim and you're guaranteed to get the 'Lexus Safety System+' portfolio of advanced safety systems as standard. Its features make use of camera and radar sensors to support the driver with improved information, better forward vision and prompt warnings of hazards and collision risks.

Buying a car in this division ought to be a high involvement decision. Buyers should be armed with the facts but all too often are instead armed merely with hearsay and skewed badge loyalties. So here are the facts about the IS 300h. If you had £30,000 to spend and bought one of these, you'd be getting a car that in SE guise, emits just 97g/km of carbon dioxide per kilometre and will eke 67.3 miles from a gallon of unleaded. The IS 300h Luxury grade is rated at 103g/km, while the IS 300h F Sport and Premier grades are good for 109g/km, qualifying for zero first-year VED charge. Residual values of the IS have always been good, propped up by the model's brilliant reliability and customer satisfaction metrics, as well as modest insurance ratings. This car looks set to continue that form line.

On paper, the IS300h hybrid offers the best of almost all worlds. You get the smoothness and cleanliness of a petrol engine, with the economy and torque response of a diesel. The hybrid technology is now mature, as thousands of cab drivers with quarter million mile Priuses will attest. If you get better performance, better economy and lower emissions from a car that's better equipped and more affordable than rival diesels, you have to ask yourself why you'd shop elsewhere. It's been a long time since we've had a genuinely credible rival to break up the BMW 3 Series, a Mercedes C-Class and Audi A4 triumvirate. The Jaguar X-TYPE, the Volvo S60, the Alfa Romeo 159 and the first two generations of Lexus IS all tried and largely failed. This one deserves better. Do the homework and you'll see why. 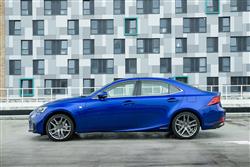 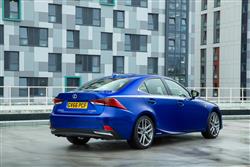 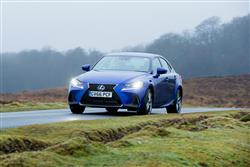 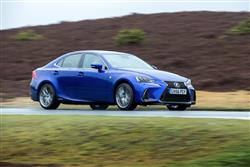 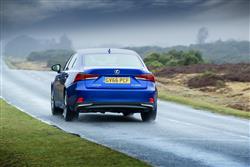 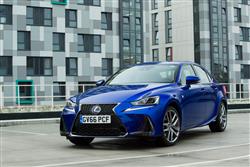