If the Mazda2 was a song, it's probably what you'd describe as a bit of a slow burner. It doesn't grab you at first, but spend a little time with it and its qualities shine through. A similar thing happened with used sales. When the car first launched in 2003, it didn't exactly kick on but, as time passed, UK buyers began to see the merits of this small car. Well, some did. Most just bought Ford Fiestas and Vauxhall Corsas instead. A turning point perhaps came in 2007 with the launch of the well-received second generation model. It's the updated 2011 to 2015 version of this design that we're going to evaluate here as a used car buy.

Mazda launched the first generation Mazda2 in 2003 but, truth be told, it wasn't a car that really threatened the best in class. What it did do was establish Mazda as one of the pack; capable of building a decent supermini. Clearly more was required and that appeared in 2007 with the launch of the second generation Mazda2. This model effectively ran right through to 2015, but it did get facelifted at the tail end of 2010, with those cars going on sale as 2011 model year vehicles. It's this version of the Mazda2 that we examine here. The launch trims were pretty easy to get a handle on - TS as the entry level, with the TS2 the next step up, then Tamura and finally the range-topping Sport trim. Engines comprised a 1.3 petrol in either 75 or 84PS tune, a 102PS 1.5-litre petrol and a 95PS 1.6-litre diesel. Mazda didn't take long to start down the special edition route. In fact, the first appeared within two months. The Takuya edition was based on an 84PS Tamura and also got front fog lights, black sports trim, rear electric windows, automatic climate-control air-conditioning, a Parrot Bluetooth hands-free kit and a new rear bumper sports trim. The next special was also based on the 84PS Tamura. The Mazda2 Black appeared in July 2011 and added a black vinyl roof, matt black 16-inch alloy wheels, front fog lights, privacy glass and a rear bumper sports trim. Inside, there is the Sports interior with climate control air-conditioning, a Parrot Bluetooth hands-free system, electric rear windows, plus unique 'Black Edition' exterior badging, uniquely numbered interior plaque and Limited Edition floor mats. There was then a hiatus of nearly two and half years. Then at the start of 2014, Mazda rejigged the range and ditched the TS and TS2 models for an SE Air Con. The 1.5-petrol engine and the diesel were both pensioned off and a 102PS version of the 1.3-litre engine featured in the Tamura Nav Auto. The Sport Venture edition also appeared, based on the 1.3 Tamura but with 13 extra items of equipment. At the start of February 2014, up popped the Colour edition and the Sport Colour edition, the former based on the 75PS engine, the latter on the 84PS. That was the last of the major changes before the car was replaced at the start of 2015 with an all-new model.

The Mazda2's cabin is one area where it feels a little behind the pace of the very latest cars in the class, with some rather hard plastics on display but there's a huge difference between perceived and actual quality. A case in point. A Volkswagen Polo will feel a good deal more premium but which of the two cars do you think results in higher warranty claims? Well done if you said the German one. The five-door Mazda2 model's cabin is laid out in a sensible well thought out way. There's excellent storage inside the cabin and a sporty edge to the details too. Most of the dials and vents are circular in design, and their design seems to be part of a conscious design theme rather than a trawl through a parts bin. The sporty edge continues outside the car where the look tends to resemble the stance of a hot-hatch, rather than that of a supermini. The overhangs are minimal at each end, the bumpers body coloured and if you specify the alloy wheel option, you end up with what is still one of the tidiest looking of all superminis. There are some slick styling touches in the design of lights and grilles too, these revised items being cohesively integrated into the Mazda2's overall shape.

The Mazda2 scores with its sheer reliability. In short, not a lot goes wrong with these cars, whether you choose manual or auto, petrol or diesel. They just seem to tick along without much trouble. The car scored a five-star EuroNCAP safety score, so there are no concerns there either.

(Estimated prices, based on a Mazda2 1.3). Consumables are quite reasonably priced. An air filter is around £14 and a fuel filter retails at round £24. An oil filter is £6, spark plugs are about £3 and a timing belt is around £40.

Lightness is the defining characteristic in the way the Mazda2 drives. This second generation car saves over 100kg compared to its 2003-vintage predecessor and you'll feel that as soon as you turn it into a corner. There's a sparky, effervescence to it that makes it real fun to drive. In addition to that, taking weight out of the car actually helps its ride quality, the lighter wheels reducing unsprung weight. It also greatly assists the power to weight ratio. The most popular engine is the 84PS 1.3-litre MZR petrol unit. This will accelerate the Mazda2 to 62mph in 13.6 seconds. This may not sound a lot, but around town, you're unlikely to ever notice any issues as it steps of the line very crisply. The clever electronic power steering provides plenty of assistance at city speeds, helping you to zip in and out of small spaces. Up the pace a little and the power steering isn't the last word in textured feedback but that goes with the territory. Clearly Mazda has paid attention to the driver dynamics of this car, and with a good level of success. Still, as good as they are, the driving characteristics of the Mazda2 probably aren't going to be the chief reason for purchase.

The Mazda2's relatively modest UK sales were always a bit of a puzzle. Especially when you considered that under its skin, it shared almost all of its underpinnings with the best-selling car in the country, the Ford Fiesta. So imagine a Fiesta that was better built, better equipped, better looking and which, if you could haggle a bit, needn't be any pricier. It sounds like a winner, right? Well it can come good all over again. If you're shopping for a supermini that was out of warranty, Mazda makes a good deal more sense than Ford. And if you're looking at a '2', it makes sense to try and stretch to one of the post-2011 facelift variants. About the only downside is the marginally pricier spares, but where there is parts commonality, canny buyers can just buy the Ford part instead. The Mazda2 remains one of the shrewdest used supermini buys around. 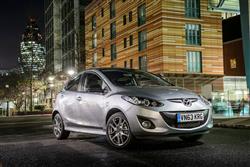