Though hardly the most affordable choice in this sector, Mazda's CX-3 is cleverer, faster, more stylish and better to drive than most cars of the Juke-genre from the 2015-2019 period. But does it make sense as a used buy? Let's find out.

Launched in 2015, the CX-3 was a model very much in tune with this Japanese brand's vision for the period of what automotive design should be - a so-called 'SKYACTIV' philosophy that was all about creating cars that were light, efficient, pretty and, above all else, fun to drive. In the metal, it looks an energetic little thing and from launch, Mazda promised us it would drive that way too. This was the first small Crossover to match the class-leadingly agile Nissan Juke in that respect. All of this was underlined by connectivity and cabin quality carried over from the little Mazda2 this model was based upon. From new, CX-3 ownership came with premium pricing and most original sales were of a petrol model with an engine much larger than buyers were used to seeing in this segment. The car sold until the end of 2019.

All too often, Crossovers in this class look too gawky, stubby, tall and narrow, with strange, 'hall of mirrors' dimensions. In contrast, this CX-3 just looks right thanks to its cab-back body and long bonnet proportions. The overall effect is anything but cutesy and the coupe-like roofline gives it a real sporting stance. Behind the wheel, it's obvious just how much of this design is derived from the brand's little Mazda2 supermini. Everything around you is familiar from that little hatch but the key difference with this CX-3 is this Crossover model's 50mm-higher driver's eyeline, delivering the loftier driving position and better all-round visibility that customers in this segment expect. For us though, it's the seats that are most important here, height-adjustable of course and carefully designed for excellent support. In short, getting comfortable in this Mazda is as easy as you could ever imagine it would be in a car of this diminutive size. Once you've completed that process and taken a look around, there are a few things that'll stand out. First up is the deeply-cowled motorcycle-style central dial. The other defining interior feature lies not in what's included but in what's been left out. There's no centre stack dividing the front of the cabin - so no mid-mounted display screen or stereo system. That infotainment display has been re-sited onto the very top of the dash where it's placed more precisely into your field of vision. There's certainly a greater feeling of spaciousness than there would be in a Mazda2, courtesy of a bit of extra roof height (this car's 40mm taller than its supermini counterpart) and the fact that the seats have been placed further apart. Parents will find that makes turning round to their rear-seated offspring that little bit easier. Talking of a seat in the rear, well two adults will be certainly be fine here, thanks in part to the efforts made by the designers in creating the slimmer front seatbacks that feature concave sculpting that frees up space for your knees. If you need more room than that, then you probably need to try the brand's slightly larger CX-5. The same comment applies when it comes to cargo space. Lift the light tailgate and this CX-3's 350-litre boot is inevitably dwarfed by the 503-litre capacity offered by its larger stablemate, but that total is sufficient to match the modest standards set by the class leader, Nissan's Juke.

Almost all the Mazda CX-3 owners we surveyed seemed very happy with this model - which was encouraging. However, that doesn't mean there aren't things you'll need to look for. A few owners reported small niggles relating to non-engine electrics and centring on the sat-nav and the climate control. One owner with a diesel variant had constant problems with the diesel particulate filer/engine management light. Other than that, it's the usual things: insist on a fully stamped-up service history. Check the alloys for parking scuffs. And the interior for signs of child damage.

On the move, you'll find that Mazda's SKYACTIV chassis technology has made this car light and agile. As a result, it's as happy as a golden retriever puppy when the roads get twisty. The extra performance of the SKYATIV-G petrol engine lets you enjoy that to the full too. At 2.0-litres in size, offering a choice of either 120 or 150PS, it's a larger and more powerful unit than you might expect to find in a car of this size but the payoff is performance on another level from most rivals. The 105PS 1.5-litre SKYACTIV-D diesel we're trying here isn't quite as peppy but it's still energetic enough to allow you to enjoy yourself. The ride quality's quite firm, but refinement's good enough to make longer trips possible.

In its own way, this little CX-3 was just as pleasant a surprise as its larger CX5 Crossover stablemate. As with that model, this one matched the highest standards in the segment for driving dynamics. Plus with a CX-3, you get more performance than most rivals from this period can offer, so you can enjoy this car's joie de vivre to the full. Yes, there's a price to pay for all this attention to detail, one that may mean you having to stretch our budget a little further than you might have expected to for a car of this kind. We think this CX-3 is good enough to justify that though. It was a fashionably late entrant to the little Crossover class but undeniably, a very complete one. 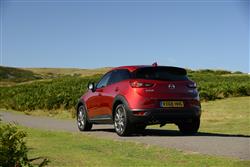 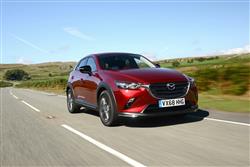 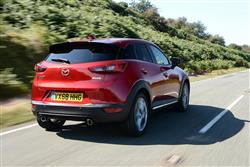 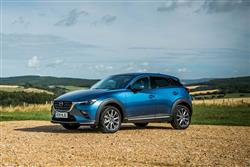 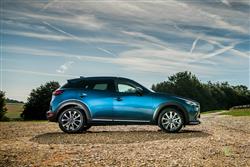 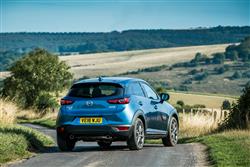