The Mazda MX-5 seems to have achieved genuinely iconic status amongst sports car fans. It's the affordable roadster that can do no wrong. Or is it? The third generation MX-5 launched in 2005 got bigger and softer and for the very first time, there were mutterings that Mazda had taken their eye off the ball. The Hiroshima brand didn't hurry a response, waiting until Spring 2009 to introduce a whole raft of updates and improvements that once again made the car what it always should have been. Namely, something so much sharper and more fun to drive than anything comparable, yet not a car that would pose a huge risk to your licence in the process. So this improved MK3 model is the version to seek out if you're going to be shopping amongst third generation MX-5s. Here's what to look for.

We'll start with a whirlwind primer on the MX-5's background. Introduced to rave reviews way back in 1991, this little roadster rapidly became an institution, shamelessly aping classic British sports cars but passing on the flaky build quality. The second generation model arrived in April 1998. Here, the pop-up headlamps were ditched in favour of fixed lights, the engines were made more powerful and the vinyl zip out rear window was upgraded to a proper glass item. The MK3 version debuted in September 2005 and although it was a little bigger and heavier, the styling rejuvenated the car, being a bit edgier than before. Most importantly, the introduction in September 2006 of the Roadster-Coupe model with its folding hard top further broadened the appeal to customers who wanted the handling of the MX-5 but weren't enamoured of a fabric roof. Which brings us to the version we're concerned with here, the facelifted MK3 model introduced in the Spring of 2009. With this car, gone was the cutesy front end in favour of a look that ramped up the aggression a few notches, mixing some testosterone into the MX-5's previously mild personality. There were a number of changes under the skin to tauten the feel of the car, a bunch of specification upgrades and, inevitably, the onslaught of even more of the kind of special edition models that Mazda is so keen on. We had a '20th Anniversary' version in February 2010, the 'Miyako' model in June of that year, the 'Kendo' in February 2011, the 'Kuro' in June 2012 and then the 'Venture' models in September 2012.

Five basic requirements were defined to realise Mazda's design criteria for the MX-5. Firstly the car would be as light as possible while meeting global safety requirements. Next, the cockpit would comfortably accommodate two full stature occupants with no wasted space. Thirdly, the basic layout would continue with the original's front-engine rear-wheel drive configuration, with the engine positioned ahead of the driver but behind the front axle for a 50:50 front to rear weight distribution. Next, all four wheels would be attached by wishbone or multi-link suspension systems to maximize tyre performance, road grip and dynamic stability. Finally, the chassis would provide a solid connection between the engine and the rear mounted differential to sharpen throttle response. This car puts a big tick beside all those boxes and in this improved MK3 guise, dresses the winning formula in a smarter suit of clothes. The changes aren't drastic but the front end of this particular MX-5 has a more aggressive edge, courtesy of a reshaped air-intake with cutaway sections either side to house the fog lights. Revisions to the side sills and the rear bumper complete the effect. The interior is simple but effective and does indeed have space for a pair of lofty adults. With this model, there's more silver detailing about the place and that gives a more upmarket feel than the previous dark plastics. The hard-topped Roadster-Coupe variant especially benefitted from the MK3 version's 2009 model year facelift package, undergoing a series of changes aimed at reducing cabin noise. And from this point onwards, every MX-5 came better equipped, including features like a leather-trimmed steering wheel, gear knob and hand-brake, alloy wheels, plus an MP3-compatible audio system with six speakers and an auxiliary (AUX) input jack for MP3 and iPod connection. The improvements also stretched to fine-tuning of the engines on offer. This, coupled to aerodynamic drag reduction, meant significant reductions in CO2 emissions which dropped down from 174 to 167g/km for the 1.8i SE model. Add to that better fuel consumption - an improvement from 38.7 to 40.4mpg on the combined cycle for the 1.8i SE - and you had a package adding up to significantly reduced running costs compared to the original MK3 model.

The MX-5 has proved to be one of the most reliable sports cars money can buy. No, scrub that. Cars full stop. In a recent annual reliability survey that covered more than 50,000 vehicles, What Car? magazine confirmed this iconic roadster to be the most reliable car in Britain. Mazda MX-5 sports cars manufactured since 2005 recorded a failure rate of just 4% percent - the lowest of all models covered in the 2012 survey - compared to the next nearest open-top competitor at 15%. With 96% of these Mazda models being fault-free, the MX-5 also achieved an impressive Reliability Index (RI) score of just eight (the lower score, the better the car), while the national average score for individual models was 100. According to the survey, MX-5 owners also benefit from the lowest repair costs, with an average repair bill of just £165. You get the idea: you can't go too far wrong here. Just make sure that the car has been serviced on the button, hasn't been crassly modified and hasn't suffered accident damage. It's also quite easy to ruin a set of back tyres if you know how to disable the stability control and have found a deserted airfield or a benign roundabout, so make sure there's some tread on those rears. Otherwise just check the alloys for kerbing damage, the front tyres for wear and the hood for signs of rips, damage or discolouration. The Roadster-Coupe roof mechanism should also work quickly with no need for manual alignment. Mazda raised the ride height of more recently made MX-5s by 30mm to pass EU pedestrian crash tests. Apparently though, the car handles far better when returned to the lower factory ride height. Take that up with an MX-5 specialist if you want to find out more.

When the third generation MX-5 was originally launched in 2005, the 1.8 and 2.0-litre petrol engines offered enough power to exploit its agile chassis but didn't reward you with a banshee wail or a feral snarl when you left your foot in the corner. Modifications to the intake manifold and the introduction of a forged crankshaft on the facelifted model sold between 2009 and 2012 were specifically designed to produce the kind of aural exhilaration that can add so much to a roadster's character. The 2.0-litre engine also got an extended rev limit so that it topped out at a higher 7,500rpm, 500rpm above the level at which its peak 124bhp of power was generated. Go for the 1.8-litre unit and you'll find that it delivers its 124bhp maximum at 6,500rpm. But power, of course, has never been the point of the MX-5. The joy of this little Mazda has always emanated from the purity of its chassis and its intuitive handling. The Japanese call it Jinba Ittai, the feeling of oneness between car and driver: if we call it 'fun', we won't be a million miles away. Compared to more hardcore sports cars, the MX-5 has always felt softer and more forgiving, but its pure, communicative driving experience always gave it the edge over most of them in terms of sheer enjoyment. The version we're looking at here advanced that philosophy a step or two further with a number of small revisions. A retuned suspension set-up encouraged faster responses to steering inputs and reduced body roll. The 6-speed manual gearbox was revised for faster, smother shifts and an automatic gearbox was made available for the first time. The paddle-shift transmission offered a relief to your left leg in heavy traffic.

The Mazda MX-5 has been designed to entertain without imposing the usual sacrifices you need to make when choosing a sports car. It's no wonder that the Japanese brand has sold over a million of these things. This model has always been reliable, economical and safe. In facelifted third generation form, it's also just that little bit smarter, more efficient and more exciting. The perfect used roadster? That's about the size of it. 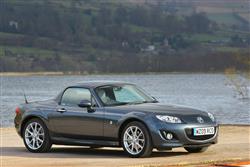