Can you really justify paying somewhere in the £25,000 to £35,000 bracket for a mid-sized five-seat MPV? If so, then here's the one you should probably buy. June Neary checks out Mercedes' third generation B-class..

The Mercedes of mid-sized MPVs was never going to be a cheap car, but it was always going to be a good one. And so it has proved. There's been a lot of moaning that, at prices starting from £25,000 or more, this third generation B-Class model is considerably more expensive than cars against which it apparently competes, like Renault's Scenic and Ford's C-MAX. But first, you'd expect it to be and second, Mercedes say that this isn't a mid-sized MPV anyway. Sure, they hope it will steal sales from top end compact People Carriers, but the company also wants you to think of it as a kind of 'Sports Tourer', aimed at 'lifestyle' (that word again) customers for whom practicality is not the be all and the end all. Whether you swallow that or not, I would have thought there would always be a market for a practical, spacious family car with a premium badge. I could see myself going for something like this, if funds permitted. Let's check out this third generation version.

Inside, the low-ish roofline doesn't translate into less headroom. In fact, there's actually more than you might expect, something you especially notice at the rear where there's potentially more legroom than Mercedes offers in a £70,000 S-Class luxury saloon. To really stretch out, you'll need to have paid extra for the optional sliding rear seat which can slide back and forth over a range of 14cms and can vary boot space between 455 and 705-litres. Plus it gives you a back rest that can be adjusted more vertically for awkward loads. Even if you have that though, a third adult in the second row isn't going to be very comfortable at all, perched as he or she must be on a seat that really isn't a seat at all but instead a raised section of upholstery linking the two outer chairs. Worse, this car's front driven layout hasn't prevented a transmission tunnel-shaped intrusion robbing centre seat legroom. Still, there's decent luggage room on offer, even if the 455-litre capacity is a little down on the figure offered by the MK2-era B-Class model. Which is all very worthy - but now for the best bit. Behind the wheel. It's very hard to think of any sub-£30,000 family car that feels as good as this one once you get into the driver's seat. It's a beautifully conceived cabin, from the three-dimensional fascia finish to the supercar-style air vents. Instead of the usual cowled instrument binnacle, two elongated square colour TFT screens are provided, one for the centre-dash infotainment system, the other for the dials you view through the sophisticated three-spoke multi-function steering wheel. These monitors are both 7-inches in size as standard, but can be upgraded - as on my test car - to 10.25-inches in size if you pay extra. The central one is your main interface for the brand's new 'MBUX' ('Mercedes-Benz User eXperience') multimedia system, which includes hard disc sat nav and the brand's latest - but sometimes rather frustrating - 'Hey Mercedes' voice control system. Aside from connectivity, the trimming's classy and though material quality isn't class-leading, it's all put together in a way that really raises the bar for interiors in this sector.

So, you'll be keen to know how it'll feel on the school run or on a trip to collect your dry cleaning. I was. The answer will depend a little on the engine you choose because that dictates the kind of suspension package you get. Two passive suspension arrangements are offered, a basic torsion beam package for the lower-powered models and a suppler multi-link set-up for the more powerful 2.0-litre versions further up the range. Ah yes engines - let me tell you about those. The most affordable versions get powerplants developed by Mercedes in conjunction with its European Alliance partner Renault. There's a 116hp 1.5-litre diesel for the popular B180d derivative - or a couple of more recently developed 1.3-litre petrol units: either the 136hp engine fitted to the base B180. Or the 163hp B200, which features cylinder deactivation technology, enough to help this particular B-Class deliver reasonable efficiency figures - up to 46.3mpg on the combined cycle and 126g/km of CO2 with the 7G-DCT automatic that most buyers will want. You have to have this self-shifter if you go for either of the 2.0-litre petrol models, the 190hp B220 4MATIC and the 224hp B250. For my test though, I opted to test the 2.0-litre diesel, which only comes mated to its own 8-speed auto gearbox. It's available either in the 150hp B200d variant I sampled or in a top B220d 190hp state of tune.

This is the crux of it of course. Curiously, I thought the better value B-Class models were the more expensive ones. From launch, prices were pitched in the £25,500 to £33,000 bracket and there are two trim levels available - 'Sport' and 'AMG Line', with an emphasis on the latter spec level further up the range. I felt rather let down by the weedily-powered B180, but the B200d at around £30,000 I thought a very appealing package and decent value for what it was. Many will be like some of my colleagues, looking at these prices and comparing them to something like a Renault Scenic or a Focus C-MAX before deciding that the gulf is just too large. To my mind that's missing the point. If you must compare to something conventional, compare to something like a Volkswagen Passat Estate or Volvo V60 - all more natural and more realistic rivals.

I must be what Mercedes call 'an aspirational person' since I bought into the B-Class premise without much difficulty. Class costs but in return, you get a masterpiece of packaging, an aspirational badge, low depreciation and a quality steer. If that's not enough to justify the price premium in your book, then fair enough. Me? I'd rather shake the piggy bank a bit further for a B. 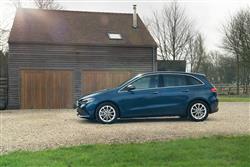 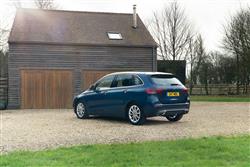 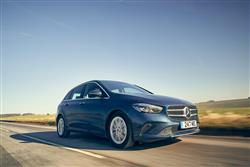 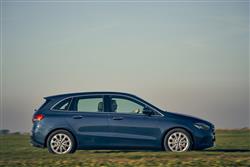 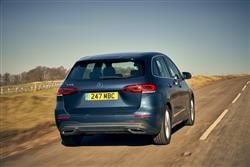 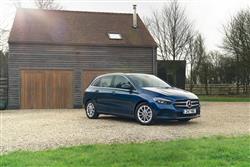