The C-Class Coupe serves up a low key but high concept slice of modern Mercedes design. June Neary tries it.

I was always a secret admirer of the old Mercedes CLK coupe and I say secret because, while I always recognised the car was never quite as good as a BMW 3 Series coupe of the same period, I preferred the Mercedes' styling and didn't want to be labelled superficial. I always longed for a sleek two-door Mercedes that was not only achingly pretty but also able to mix it with BMW's best in every other area. Now I know that coupes are usually one class of car that get an exemption from most of the normal rules based on the way they look, and it has to be said that this latest C-Class Coupe does look extremely good, but as soon as it arrived, I began searching for the catch. The good news? So far, I don't seem to have discovered any notable caveats.

The C-Class Coupe doesn't cost an awful lot less than Mercedes' E-Class Coupe and you have to wonder whether there's really space for both models in the market. Mercedes reason that older buyers will prefer the E, while the young - and the young at heart - will prefer the C-Class. They're both handsome pieces of styling, but I'd go for the C-Class every time. Unless you can stretch to the fire-breathing C63 AMG models, the styling of the C-Class is rather low key, with the modern Mercedes family face grafted onto a sleek and, yes, mature profile. The rearmost side window shape looks suspiciously like a BMW which in itself is no bad thing, and the only design detail that you'd need to be careful of are the wheels. The 18-inch alloy wheels can look a little lost with those big slab flanks, so much as I enjoy a smooth-riding car, I think I might be tempted to go for a 19-inch wheel to give the car the right amount of visual balance. As with all coupe models in this class, there's not a great deal of room in the back, but that's hardly big news. The boot is a decent size and the rear seats fold down if you need to carry long items.

Jump inside and you'll find the C-Class Coupe has been treated to the same high quality fittings that Mercedes has bestowed upon the latest C-Class saloon and estate. The materials quality is far higher than C-Class models of the past and there's plenty of space for front seat occupants although the rears remain best left for small kids or handbags. This C-class also gets the option of the fully-digital instrument display, a 12.3-inch TFT screen that replaces the conventional dials using technology borrowed from larger Mercedes models. You can customise the layout between three display styles - 'Classic', 'Sport' and 'Progressive'. As before, flowing forms characterise the centre console as well as the door and rear side panelling, which smoothly merge into one another to emphasise the coupe character. There are front sports seats specifically designed for this Coupe variant and featuring automatic belt feeders for added convenience. Engines? The range kicks off with the new 1.5-litre petrol unit fitted to the base C200, a model available either rear-driven or with 4MATIC AWD. This powerplant puts out 184hp and a useful 280Nm of torque, plus it features clever 'EQ Boost' technology which uses a 48volt on-board network with a belt-driven starter/alternator. When accelerating, 'EQ Boost' system can assist the engine with an additional 14hp, bridging the brief moment until the turbocharger has built up its full charge pressure. Mercedes has also developed a 2.0-litre 254hp version of this petrol engine for the C300 variant. There's a new four cylinder diesel too, the previous 2.1-litre unit now replaced by a state-of-the-art 2.0-litre powerplant with 194hp. Across the range there's a standard 'DYNAMIC SELECT' driving modes system - and you can add to that with optional 'DYNAMIC BODY CONTROL' adaptive damping. At the top of the range lie the fearsome Mercedes-AMG models, offered with V6 or V8 power. The V6-engined C43 4MATIC now puts out 390hp. At the top of the range is the C63 AMG which is most certainly not for the faint hearted. Developing a frankly overstuffed 476 or 510hp (depending on the variant chosen), this is a vehicle that will delight the skilled driver and terrify the timid in equal measures, as indeed a proper AMG product should.

Mercedes has priced the C-Class Coupe extremely carefully, taking into account the positioning of its E-Class two door as well as the BMW 4 Series Coupe and the Audi A5. Most models will be sold in the £38,000 to £40,000 bracket. Ongoing running costs are very competitive. The new 1.5-litre EQ Boost petrol engine fitted to the base C200 enables a useful improvement in efficiency to be possible, so don't automatically opt for a diesel this time round. It puts out 140g/km of CO2. This unit features a clever starter/alternator that during deceleration recuperates kinetic energy and charges the battery. For auto models, there's also a gliding mode that operates at cruising speeds, switching the engine off, before seamlessly re-starting it when you brush your foot against the throttle. And a 'recuperative brake with intelligent engine stop' function which also works when the vehicle is coasting. Mercedes says that internal friction is much reduced with this new four cylinder unit.

As long as you don't need to regularly transport adults (or adult-sized kids) in the back, then it's hard to see how anybody couldn't make space for a Mercedes C-Class Coupe in their lives, funds permitting of course. Unfortunately, funds aren't permitting right now, so as much as I would love a new C220d, it's back to the classifieds for me. I'm belatedly coming out of the closet and declaring my affection for that old CLK. 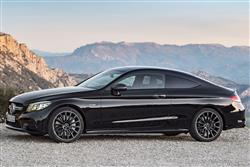 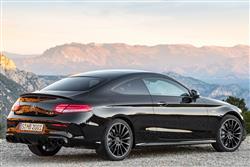 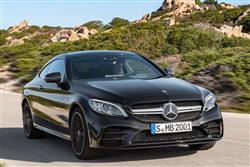 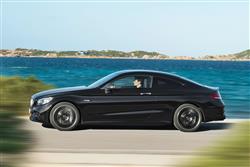 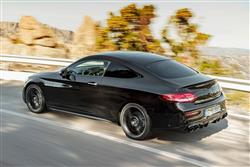 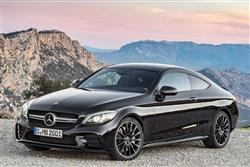