If asked what car has had the biggest positive effect in improving the image of modern Mercedes vehicles, I'd look past the clever A-Class, the halo SLS AMG gull wing coupe and even the iconic S-Class. Instead, I'd point to the C63 AMG. You might question the relevance of a 6.2-litre V8-engined car that was launched just as the credit crunch was slotting into overdrive but here is a model that fundamentally changed Mercedes' reputation. Prior to this car, Mercedes wasn't really considered a top-drawer broker of performance vehicles. The C63 AMG changed all that. Here's what to look for when tracking down a used saloon, coupe or estate example of this landmark model.

The year 2007 was pivotal for Mercedes. This was the time that, after fourteen years in the shadow of the BMW 3 Series, the C-Class finally stepped out and asserted itself. For so long, too many aspects of the C-Class had been a copy of BMW's strategy, yet it felt like a car without a great deal of personality, that was leaning on rather than enhancing that three-pointed star. In March of 2007 we got the W204 car, the third generation C-Class, and it delivered a return to reassuring quality and driver appeal. Stuttgart was back in the game. The C63 AMG was announced towards the tail end of 2007 for a 2008 model year launch. It looked to be continuing a trend of AMG-badged compact sports saloons that began with the 276bhp C36 AMG in 1993 and continued onwards with the rarely seen C43 and C55 models. Compared to these, the C63 was in a different league - and it needed to be if it was to maintain a place at the top table with the world's performance saloon elite. Under the bonnet, Stuttgart knew that quite a powerplant would be needed if this car was to mix it with BMW's M3 and Audi's RS4, rivals that both harboured 414bhp V8s. The Mercedes AMG engineers responded with a massive normally-aspirated 6208cc unit that trumped both these competitors. There was a wider range of bodystyles too, with saloon, estate and coupe options. The C-Class received a facelift in 2012 and the C63 AMG was uprated too. The front became sleeker, plus there were revised bumpers, an aluminium bonnet with a modified powerdome, new lights and rear diffuser fins. The gearbox was upgraded to the seven-speed AMG Speedshift MCT sports transmission and while the engine was still rated at 457bhp, Mercedes offered an AMG Performance pack which upped power to 487bhp by lifting the forged pistons, connecting rods and lightweight crankshaft from the SLS supercar. To give the car an appropriate send off, Mercedes introduced a high power Edition 507 limited run model in 2013.

Visually, the C63 leaves you in no doubt that it isn't an ordinary C-Class. The flared wheelarches accommodate the wider front and rear track and a pair of power dome bulges in the bonnet hint at the kind of muscle that's waiting ready to be flexed in the engine bay. The grille is filled in with a honeycomb pattern, as are the snarling air-intakes sliced into the under bumper area. 18" AMG alloys, side skirts, four chrome exhaust pipes and a subtle boot lid spoiler are amongst the other standout features. The interior centrepieces are the AMG three-spoke performance steering wheel with the flat bottomed design that's cropping up in every fast car at the moment and the multi-adjustable driver's seat. For a car with this much go, it's reassuring to see that the braking system has been the subject of intense development on the part of the design team. All four wheels get ventilated discs that clamp down with some ferocity thanks to the six and four piston callipers at the front and rear respectively. Working in tandem with these brakes is the three stage ESP system that can be activated, deactivated or switched to a compromise Sport mode. The Sport mode allows for a greater degree of understeer or oversteer before it intervenes by braking the relevant wheels or cutting engine torque. It all makes for a more involving driving experience and real tearaways can turn the whole ESP system off and drive as nature intended but Mercedes recommend that you save this for the racetrack. In both "Sport" and "ESP off" mode, the ESP reactivates under braking but then reverts to the desired mode once the pedal is released.

Insist on a full Mercedes dealer service history, especially for the most recent models whose lengthy warranty - effectively for the life of the car - is dependent on proper servicing by an authorised agent. Check that all the accessories work and watch out for cosmetic damage which can be expensive to correct. Look out for cars that have been neglected. The usual signs here are an ignorance of proper oil servicing and the fitment of non OE-spec or equivalent quality tyres. The 6.2-litre engine is a tough unit but needs to be serviced on the nose and requires diligent attention when it comes to fluid levels. The wheels are very prone to kerbing and make sure the exhaust hasn't sustained any damage from track day kerb-hopping.

The heart of the C63 is its 6.3-litre V8 which is directly derived from the one used in the AMG C-Class touring car in the German DTM race series. The 457bhp maximum power output is produced at 6,800rpm without the aid of a turbocharger and there's some 600Nm of torque available at 5,000rpm. Perhaps more impressive is that at least 500Nm or that torque is on tap between 2,000 and 6,250rpm, ensuring that the engine responds quickly and pulls strongly across a broad spread of the rev range. All that power is marshalled by the AMG Speedshift Plus 7G-Tronic gearbox. The paddle shift system can be configured in Sport, Comfort or Manual modes and is the first gearbox on an AMG model to feature an automatic throttle blipping function for smoother downshifts. The later Speedshift MCT system with its take-off torque converter is a noticeably slicker set-up, with smarter auto downchanges. Mercedes-AMG has turned out some obscenely powerful cars before but they haven't always had the talent in the chassis department to deploy this devastating clout without help from an overbearing traction control system. This removed much of the purity and involvement from the driving experience, the dash display warning lights doing their best impression of Blackpool's illuminations when you opened the throttle as the electronic systems struggled to maintain forward progress. It was the old generation of larger AMG models that were the worst culprits here, their twin-turbocharged engines producing a sudden and monumental hit of torque that would overwhelm the tyres. In contrast, the C63 is far better equipped to deliver an entertaining driving experience. For a start, it has the talented C-Class chassis as a base but with completely revised three-link front suspension giving a 35mm wider front track and a multi-link rear set-up that widens the rear track by 12mm. Then there's that normally-aspirated engine that will pile on its power in a smooth, progressive fashion all the way up to the red line. It's all allowed Mercedes to fit the C63 with an ESP stability control system that can be relaxed or switched off entirely to allow the car's limits of traction and grip to be explored by the keen driver.

The Mercedes-Benz C63 AMG did the unthinkable. It made BMW's M3 seem a bit undercooked. Yes, there was still an element of the hot rod about that giant engine plumbed into such a modestly-sized car but you didn't have to drive far down the road to realise that here was a car with proper steering and suspension crafted with care and rare talent. That engine will be remembered as a classic of its kind and endows this Mercedes with real charisma. Whether you choose saloon, coupe or estate, the C63 AMG remains one of the finest performance cars available at any price. 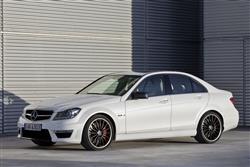 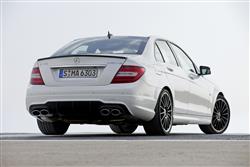 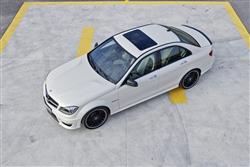 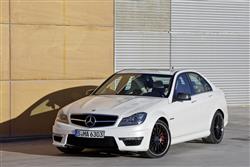 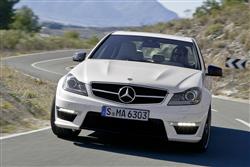