If you like the idea of Mercedes' third generation CLS four-door coupe, it's most likely that it'll be the top 400d diesel version you'll be targeting. Jonathan Crouch drives it.

Let's see if this is you. You've done pretty well in life and you've earned the right to a prestigious executive car. You'd rather like a Mercedes-Benz - but not a dull-looking one like the guy over the road drives. If that three-pointed star could be mounted on the bonnet of something with proper rear seat space that cuts more of a dash - something a little more cutting edge - you'd be interested. And you'd be Mercedes CLS target market. Here, we look at the top 400d 4MATIC diesel version of the third generation model.

It sounds a simple concept: combining the elegance and dynamism of a coupe with the comfort and functionality of a saloon. This car though, was the first to perfect it - the Mercedes CLS. It's been around since 2004, with a MK2 model launched in 2011 and the third generation version we're going to test here introduced in 2018. This MK3 model CLS has brought us more eye-catching styling and a new range of engines, while promising an interior to die for that for the first time can seat up to five people. Plus there are big progressions in media connectivity, camera-driven safety technology and autonomous driving capability, all borrowed from the current E-Class. There's no unusual 'Shooting Brake' estate body style option this time round, but this car does share much with the desirable Mercedes-AMG GT 4-Door Coupe that the brand will offer you if the top fastest petrol-powered CLS variant somehow isn't quick enough or exclusive enough for you. There'll be nothing though, quite like a CLS if you have your eye on a full-sized Executive segment saloon but want something a little more original and distinctive. Time to put this third generation 'C257'-series model to the test in top '400d' diesel 4MATIC form.

The CLS may be billed as a Coupe but its driving demeanour is very much geared to long distance luxury. Lengthy highway journeys are aided by superb refinement, optional autonomous driving tech and supple suspension that can be further improved if you pay extra for 'AIR BODY CONTROL' air suspension. The CLS is a little more portly in third generation form, primarily due to the standard fitment of 4MATIC 4WD, which Mercedes deems necessary to match what rival Audi A7 Sportback and BMW 6 Series Gran Turismo models are offering in this segment. As a result, you'd be wise if budget permits to ignore the entry-level four cylinder petrol and diesel variants and instead go straight for the in-line six cylinder engines this third generation model was launched with. Most will want the 3.0-litre diesel, available with 282hp in the CLS 350d 4MATIC or 340hp in the CLS 400d 4MATIC variant we're trying for this test. Like all models, it gets 9-speed auto transmission and Mercedes' 'DYNAMIC SELECT' driving modes system. Twisting secondary roads don't really sit in this car's comfort zone - the steering's not especially feelsome but the brilliant ride quality and superb refinement offer ample compensation.

CLS styling has always been, in Mercedes' words, 'emotionally charged'. Not everyone's been a fan of this model in its first two generations but those who've liked it have really loved it. Most agree that the lines of the original 2004 version were more memorably sweeping than those of that model's more clinically-fashioned successor, a dynamically dramatic look that Chief Designer Gorden Wagener says his team have tried to recapture with this third 'C257'-series car. Inside, highlights include cabin-configurable lighting, emotive 'jet turbine'-style air vents and the widescreen cockpit design from the E-Class that sees a couple of configurable 12.3-screens joined together to replace the previous infotainment monitor and instrument binnacle dials. This optional 'COMMAND' infotainment central display is well worth having, with its Wi-Fi, 3D navigation, smartphone-mirroring features and app connectivity. Plus the cabin's beautifully trimmed and the seats are brilliantly supportive. In the rear, it's surprisingly spacious for a four-door coupe. This third generation CLS is the first in the model line in which it's actually been possible to take three people on the back seat, a change presumably in response to feedback from previous customers annoyed to find they couldn't do things like give their kids' friends a lift home from school. There's also a decent 520-litre boot, extendable with a standard 40:20:40-split rear bench.

This CLS 400d 4MATIC 'AMG Line' derivative is priced from around £60,500 and there's nothing directly comparable in this segment. The nearest options lie with the Audi A7 Sportback 50 TDI and the BMW 6 Series GT 630d xDrive, but they both feature lower-powered diesel engines that more directly compete with the lesser CLS 350d 4MATIC model (which by the way costs about £58,000). The car comes with comprehensive standard equipment including 19-inch alloy wheels, a parking package including a reversing camera, full leather upholstery and 40:20:40 split folding rear seats. Up-front, there's a 12.3-inch infotainment screen with 'Audio 20' multimedia monitor and a fully digitalised 12.3-inch cockpit display. Plus you get ambient lighting with a choice of 64 colours, Agility Control suspension and of course a DAB radio. Most buyers will probably go for the 'Premium Plus' equipment line for just under £4,000 more that gives you keyless entry, a seat memory package including electrically adjustable front seats and steering wheel, a Burmester surround sound system, a 360?? camera, the 'Comand Online' infotainment system and an electric sliding sunroof.

The 400d CLS variant delivers 47.9mpg and emits 156g/km of CO2. That's about the same as the lesser CLS 350d 4MATIC variant. The desirability of the CLS helps it perform strongly on the used market and the diesel-engined cars are the most sought after. Comparatively rare cars with evocative styling rarely fall out of bed by the time owners come to sell them on and this is no exception. All CLS models are of course priced well above the £40,000 threshold, so owners will need to pay a luxury car tax that'll set them back an extra £310 in the first year of ownership, that annual charge then rising to £450 until the fifth year you own the car. Other things we'll need to tell you include the fact that the comprehensive three year unlimited mileage warranty is built upon by Mercedes' Mobilo scheme which delivers breakdown cover for up to thirty years, as long as you continue to have your car serviced at a Mercedes main dealer. And it's worth knowing that your maintenance outlay can be kept a little in check by going for the optional Service Care package that takes care of routine maintenance, spreading the cost of regular servicing, guaranteeing the price of parts and labour for up to four services and covering the cost of all recommended service items such as brake fluid, spark plugs, air filters, fuel filters and screen wash.

Once upon a time, you could admire a Mercedes, aspire to ownership, or respect what it did but it was rarely possible to form an emotional bond with one. But then the CLS arrived and changed all that. As it still does. This MK3 model may not be quite as arresting as the first generation original but it'll still make a splash in the office car park and mark you out as an independent thinker. If that's the case, you may well agree with us that this four-door formula's certainly more elegant than the hatchback format that rivals in this sector use. For self-made business people seeking an appropriate but not extravagant reward for a lifetime's endeavour, this Mercedes remains an expressive, individual and very complete choice, especially in this top diesel '400d' guise, provided you can afford its significant price tag. It's a very German expression of fashionability, but the right kind of buyer will find it very desirable indeed. 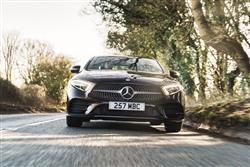 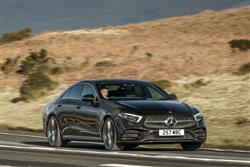 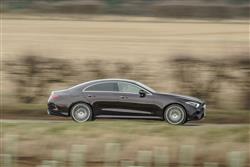 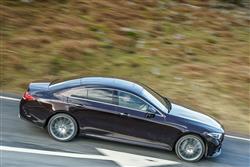 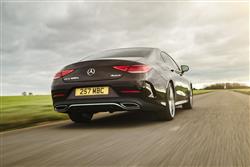 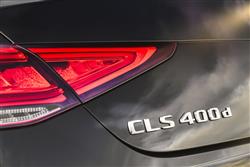