In 2016, Mercedes used its GLC mid-sized SUV as a base for this sportier, more stylish GLC Coupe variant. It's better to drive as well as being sportier to look at and the practical compromises necessitated by the sleeker shape are relatively modest. Providing you can afford the asking prices, you'll find that the sensible stuff adds up too.

The market is now getting used to the idea of a Coupe SUV - and so is Mercedes. This GLC Coupe, launched in 2016, was the brand's second stab at that concept, following the 2015 launch of the larger GLE Coupe. This swept-back GLC was launched to counter BMW's X4. In taking on that car, this one was helped by the option it offered of the kind of sophisticated air suspension system that BMW couldn't match, the kind of thing previously limited to much larger and more expensive SUVs. In fact, there was much about this car that democratised pricier SUV luxury, whether customer focus was on media connectivity, cutting edge safety or cabin aesthetics. All of this, borrowed of course from the conventional GLC, was wrapped up in a far more stylish package that still managed to be practical to a point that conventional coupe customers could once have only dreamed of. In its original form, this GLC Coupe sold until early 2019, when an updated version was launched. It's the pre-facelift car we look at here.

Come to this car expecting it to be little more than a GLC SUV with a coupe-style rear end and you may well be pleasantly surprised by the lengths to which the designers went to give this sportier body style its own identity. The basic architecture used here is of course exactly the same as that of the more conventional SUV model, but the GLC Coupe is far more dynamic in appearance, measuring in 4cms lower and nearly 8cms longer than its design stablemate. The front end is different too, primarily in its use of a feature that distinguishes other Mercedes coupes - a distinctive single-louvred grille patterned with pins that are either black or chrome-plated, depending on the trim level you've selected. Either side sit headlamps featuring full LED technology for both the main beam and the daytime running lights. More predictably, the rear is completely bespoke too, with the upright hatch of the conventional GLC replaced in this Coupe model by a far sleeker and more deeply-raked look that produces a wind-cheating 0.31Cd drag factor and aims to replicate the style of Mercedes' exotic S-Class Coupe. Inevitably though, it's in profile that this GLC Coupe really differentiates itself from the standard model. We've talked about the lower roof height and at a glance, you take in the more steeply-raked A-pillars, the high beltline, the wide shoulders and the way the roofline falls away towards the rear. At the wheel, you sit a little lower than you would in an ordinary GLC but otherwise, as you might expect, the cabin layout is shared almost identically with that car - which means it's very nice indeed. Take a look around once you're comfortably seated on the supportive ARTICO-leather trimmed seats and the two staples of current Mercedes cabin style are present and correct. There are five round silver-trimmed air vents and above the three in the centre sits a prominent iPad-style infotainment screen, its free-standing positioning smacking either of after-thought or inspired design, depending on your point of view. Anything the infotainment display can't tell you will be covered off by the smaller colour screen that nestles between the two deeply-cowled dials offered by the instrument binnacle. On the rear seats, it's far more spacious than anything branded as a 'coupe' would normally be. Yes, six-footers will find their heads brushing the roof but they'll be far better off in this regard than they would be in Mercedes' supposedly larger GLE Coupe. And luggage space? Well it's accessed via a standard electrically-operated tailgate. Mercedes obviously benchmarked BMW's X4 here, for the load capacities on offer match those of that Munich model exactly. Specifically, you're talking 500-litres, which is only 50-litres less than a conventional GLC model can offer.

Most GLC Coupe owners in our survey were satisfied, but inevitably, there were some who'd experienced problems. The most common problem we came across seems to be an inherent fault with all right hand drive GLCs; if you turn full lock, left or right, the outside tyre skips and jumps. The larger the wheel the noisier it is. This is a basic steering geometry issue and you need to check for it on your test drive. One owner replaced all brake disks due to bad vibration. A month ago the power steering stopped working as he went around a bend and the car had to be towed away prior to a complete replacement steering rack. In another instance, an owner's gearbox failed. Otherwise, it's just the usual stuff. Check for signs of damage to the bodywork and alloy wheels. Even though all GLCs came with parking sensors, there may be some and top-spec variants with wide alloy rims are particularly prone to scratches. Check for uneven panel gaps and paint flaws. Inspect the electrics and the air conditioning functionality - it should blow our really chilled air. Some owners in our survey complained of un-Mercedes-like squeaks and rattles; try the car you have in mind across a bumpy bit of road to try and expose any nasty noises.

Mercedes made a few dynamic changes in order for this GLC Coupe model to feel a little sportier than its conventional counterpart. So there's a standard sports suspension set-up that was re-tuned for this variant, plus this Coupe body style got a lower ride height and wider track, along with a re-tuned steering rack. It certainly all makes a difference, though not quite enough of one for this Mercedes to quite be able to match the agility of rivals like BMW's X4 and Porsche's Macan. Get a car whose original owner spent a little extra on the optional 'AIR BODY CONTROL' air suspension system though, and this GLC gets closer to the dynamic class standard while at the same time being able to offer ride comfort that's significantly nicer than anything competitors can offer. 'AIR BODY CONTROL' operates via the various modes of a system that Mercedes calls 'DYNAMIC SELECT', one of those set-ups that allows you to alter steering feel, gearchange timings and throttle response at the press of a button. You'll need to get familiar with this in order to get the most from the performance provided by the range of engines available. Most buyers will opt for one of the four cylinder diesels, either the base 170bhp 220d or the 204bhp 250d variant. Both units are pretty efficient, managing 56.5mpg n the combined cycle and as much as 131g/km of CO2 (both NEDC figures). There's also a 258bhp six cylinder 350d diesel - or at the top of the range, a petrol-powered option, the 258bhp Mercedes-AMG GLC Coupe 43 model. As standard, all derivatives get 4MATIC 4WD and an efficient 9G-TRONIC PLUS 9-speed automatic gearbox.

A model of this sort will continually divide opinion. The folk who don't like it will tell you to save your money and buy a cheaper, more practical GLC - but then they're probably the same people who can't see the point of anything prioritising style over substance. In any case, this GLC Coupe does have substance to its proposition - at least when it comes to technology, quality and low running costs. Like its BMW X4 arch-rival, it's even reasonably spacious and practical. In summary, what we've got here is a very complete contender indeed. Nobody actually needs a SUV Coupe of this kind, but then nobody actually needs a more conventionally-styled fashionable SUV either: there are plenty of 4WD estates that would do the job just as well. Typical buyers though, take the SUV route because it makes a little more of a driveway statement. Which means that typical buyers with the necessary budget, are probably going to like this car very much indeed. 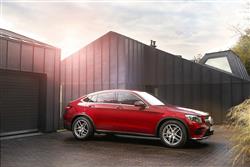 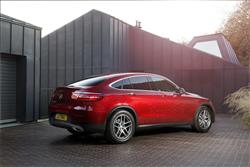 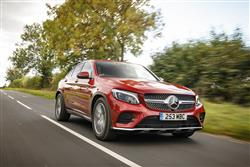 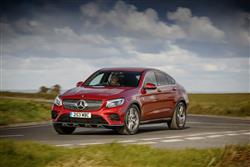 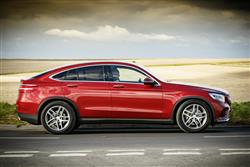 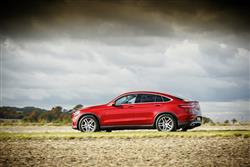