Mercedes' third generation M-Class demonstrated that big SUVs could still be a responsible choice - and a lot more besides. Beautifully made, quietly capable and state of the art in every conceivable way, it redefined the way we looked at the luxury 4x4. It wouldn't stride across hostile terrain quite like a Range Rover or power around a track quite like a BMW X5, but that wasn't a problem. Mercedes intentionally set out to offer more of a middle ground between those two extremes and, to a large extent, succeeded. Specified for off-road use, it would deliver the mud-plugging prowess to suit any right-minded user. Yet, with AirMATIC suspension, it would ride like a Roller.

Think of all the reasons not to like a large, luxury SUV 4x4. Thirst. Poor performance. Huge tax liabilities. Wobbly handling. Yet middle class motorists still love them, patiently sure perhaps that one day, the brands involved would bring us something better. Something like this - the third generation Mercedes M-Class. This has long been the world's most popular luxury 4x4, paving a path that other plush SUVs - BMW's X5, Volvo's XC90 and Audi's Q7 - would quickly follow. And improve upon. Initially, that wasn't difficult, given that the first generation version of this car was a bit of an embarrassment. Still, Mercedes quickly sorted things out with a second generation 2005 model much closer in quality to what we expect from the Three-Pointed Star. You still couldn't have called it a class leader though, the car being neither sharp enough on-road or capable enough off it for that. It's successor though, the MK3 W166 model we look at here, can be specified to satisfy buyers of either preference, all the while delivering running cost returns impressive enough to leave rivals questioning their Vorsprung Durch Teknic or wondering on the Efficiency of their Dynamics. It was launched early in 2012. With this car, Mercedes claimed it'd finally established what an M-Class should be. But does that mean you should buy a used one? With the car now replaced by the brand's GLE-Class model since the Spring of 2015, now might be the right time to check out a previously-owned third generation M model.

The third-generation M-Class is longer, wider and lower than its predecessors, with a more strident and powerful look replacing the gentle curves of the older MK2 model. The front is dominated by a three-bar radiator grille, below which LED daytime running lights are set into chrome inserts integrated into the bumpers. At the rear, there's a three-piece spoiler fitted to the powered tailgate which raises to reveal a spacious 690-litre boot. For the driver, there's a leather-stitched four-spoke multifunction steering wheel that has no fewer than 12 control buttons for the trip computer, the radio and the telephone. Dominating the centre of the stitched leather dash is a large colour screen for the infotainment system linked to a metal controller on the centre console. All versions of this car come with smart AMG alloy wheels of at least 19-inch in size, a tyre pressure warning system, metallic paint, aluminium roof rails, auto headlamps and wipers, an 'Active Park Assist' system that measures spaces and steers you into them, an AMG bodykit, rear privacy glass, a powered tailgate, sports seats trimmed in artificial 'Artico' leather with power adjustment, the 7G-TRONIC plus 7-speed automatic gearbox, a high quality 'Audio 20' stereo system, automatic climate control and Hill Start Assist to stop you drifting backwards on uphill junctions.

Many third-generation M-Class models will have had a relatively comfortable life. However, because of the low ground clearance (by SUV standards), it's worth checking the underside of the rear and front valances and the underbody for damage. Also check for any off-road scuffs or dents. It's unlikely that an 'M' will have led a tough life in the wilderness, but many will have been subjected to heavy towing and other arduous family duties. Inside, check for leather stains and scuffs. Kerbed alloy wheels will be common too, especially with the huge rims you get on the top AMG version.

(approx. based on ML250 model) A pair of brake pads will set you back more than £90. Off road damage to the radiator will be expensive too, as one of those is over £300. Expect to pay more than £250 for a new headlamp unit - and about the same for a starter motor. An alternator will ease more than £300 from your wallet. Prices for the ML63 AMG model will be higher still.

The forgettable performance of this car's predecessor meant that the third-generation M-Class was introduced two years earlier than planned. But with this vehicle, the engineering might of Mercedes was directed at creating something remarkable. Hence the segment's first four cylinder diesel, developed with or without hybrid technology. And improvements in engine efficiency so astonishing they allowed the AMG range-topping 525bhp petrol V8 to approach the running cost returns of the previous generation model's 3.0-litre V6 diesel. The 204bhp ML250 BlueTEC diesel propped up the range which was topped by the fearsome 5.5-litre ML63 AMG V8 petrol flagship. Between them came the best buy, the ML350 BlueTEC with an updated version of its predecessor's 3.0-litre V6 CDI unit, which had been powered up to 258bhp - enough to spirit you from rest to 62mph in 7.4 seconds, a second and a half quicker than the entry-level variant, on the way to a top speed of 139mph. The V8 dashed to 62mph in just 4.8 seconds and was 'restricted' to 155mph. Through the turns, the electric steering system lacks a bit of feel but does make the M-Class feel very manoeuvrable. It is also astonishingly quiet. Mercedes went to huge lengths to achieve this with innovations like its large, magnesium sound-deadening bulkhead, its triple-sealed windows and doors and its pioneering aerosol-based spray-on NVH insulation. The result is a relaxing ambience complemented in mainstream models by the lovely 7G-TRONIC Plus auto gearbox that slurs elegantly through its seven ratios - or can be taken in hand and pummelled through the gears using the paddle shifters behind the steering wheel. What comes as more of a surprise is how effective this third-generation model is when it comes to deploying the more than adequate reserves of power it has on offer. Much of this is down to the Adaptive Damping system that was fitted as standard. If you're driving gently or traversing poor surfaces, the ride is soft and absorbent. At higher speeds or with sharper changes of direction though, the set-up stiffens to provide tauter body control and more responsive handling. If you want a boulevard cruiser, then you'll want to look for a model fitted with AirMATIC four-wheel suspension with its magic carpet-like suppleness and variable ride height. If, on the other hand you want a luxury SUV that can fly through the twisty stuff, then you need one fitted with Merc's 'ACTIVE CURVE SYSTEM', an active roll stabilisation set-up which enables the M-Class to remain eerily immune to violent bodyroll and scrabbling understeer. Should you want a proper mud-plugger, then you need a model specified with the optional ON&OFFROAD system. It's an intelligent 4MATIC 4WD set-up featuring a 45/55% torque split between front and rear axles and a limited slip differential. As conditions change, a clever diff lock is able to push more or less power towards front or rear as needed. The package is great for farm tracks and slippery roads, but for more gnarly stuff, you're hampered by a relatively low 202mm ride height. Models featuring the AirMATIC suspension rise to 255mm, but with the ON&OFFROAD package the car will rise to 285mm, enough to ford water up to 600mm deep.

Let's summarise what this car won't do: stride across the Gobi desert quite like a Range Rover Sport. Or power round Brands Hatch quite like a BMW X5. But that's not a problem: this third generation M-Class, after all, intentionally set out to offer more of a middle ground between these two extremes and it's a place in which this model feels far more comfortable. Find a used example specified for off road use and it'll deliver mud-plugging prowess expert enough to suit any right-minded user. Get one specified with AirMATIC suspension and it'll ride like a Rolls Royce. Or find an example specified with the clever Active Curve System and you'll get a luxury SUV able to corner like a grown-up hot hatch. All these things are possible from a car that shows just how far the modern luxury SUV has come - not least in its eco-friendliness. Mercedes set the standard when it came to running cost efficiency with this MK3 model and it was one that caused plenty of head-scratching amongst the brand's closest rivals. There are sportier, more dynamic-looking models of this kind you could buy. But we're struggling to think of a better all-round package. Refined, practical and luxurious, this model at last became a benchmark among its peers. And that makes it a very strong used car buy. 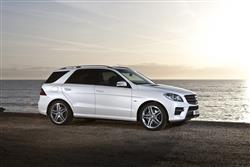 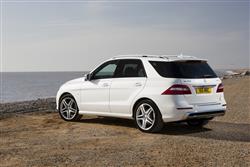 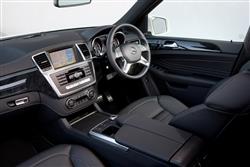 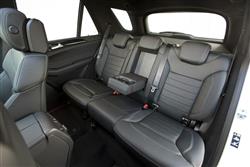 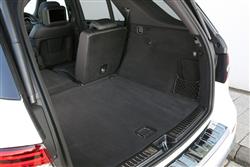 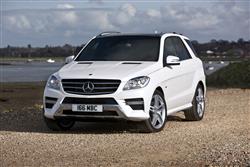