In 2016, Mercedes revived a classic 1970s name in creating this SLC, which replaced the third generation SLK as the company's compact roadster. The SLC featured a slightly smarter look, both inside and out, while the top AMG variant got a more sensible twin-turbo V6. The key changes for most buyers though, lay in upgraded automatic transmission and a 'DYNAMIC SELECT' driving modes system that helped make this machine more rewarding to drive than you might expect. So what's it like as a used buy?

Think about a compact, fashionable open-topped sportscar with a clever metal-folding roof and you tend to think of the model that, back in 1996, basically invented that concept, the Mercedes SLK. It was a car gradually improved, polished and refined over two decades and three generations that in 2016 brought us to the version we're going to look at here. It came with a new name to get used to - by 2016, Mercedes was now calling this car the 'SLC' - but the fundamentals of what was on offer were basically the same. What changed though, was the packaging and technology that made this car so appealing to target buyers - crucial upgrades for such a style-conscious market. What you need to know up-front is that this wasn't a completely new car. Instead, the SLC was an evolution of the third generation SLK model launched back in 2011, though an extremely thorough one. Fortunately, that MK3 SLK was a very good product, the first design from this model line offering genuinely good driving dynamics. Previous to that model's introduction, the SLK may have been classed as a sportscar, but it certainly didn't drive like one, bought instead by fashion-conscious folk who liked the badge and the clever Vario roof. Forced to up its game by improving rivals like Audi's TT Roadster and BMW's Z4, the third generation SLK proved to be a big step forward, with classic looks borrowed from the iconic 190SL of the Fifties, powerful engines and a clever optional 'Dynamic Handling Package' to get the best from them. By 2015 though, it was clear that another big step was needed. That rival Audi TT Roadster had been re-energised in third generation form and was eating into SLK sales, plus there was also the imminent prospect of a forthcoming third generation BMW Z4 model likely to do the same. To counter this threat, Mercedes ideally needed an all-new car, not a facelift package for an existing one, but it was too early in the product lifecycle for fundamental engineering changes and a completely new design. Hence the interim solution arrived at here. Give the SLK a new name, thoroughly re-engineer it and re-launch the car with a refreshed look and feel. That was the idea. It all brought us to this SLC. The 'C'-designation apparently referenced the close engineering links this roadster has always shared with Mercedes C-Class models. Which meant that this SLC got all the latest technology found in that product range, things like the 9G-TRONIC 9-speed auto transmission, the most sophisticated set-up in the segment. And a 'DYNAMIC SELECT' driving modes system able to modify engine, transmission, steering and suspension settings to suit the driver's need. There was also a fresh high performance flagship variant, the Mercedes-AMG SLC 43, which swapped the old SLK 55 AMG's thirsty V8 for a twin-turbo 3.0-litre V6 that was almost as fast and much more efficient. Plus, across the range, there was smarter styling inside and out, along with plenty of the brand's latest technology when it comes to safety and connectivity. This SLC sold until 2020, when it left production (just after a 'Final Edition' version of the SLC 200 and SLC 300 models, launched in 2019). The SLC wasn't replaced.

Different, but somehow still the same is the aesthetic story with this SLC. The changes over the third generation SLK it's derived from were minor, which means that you get the familiar 'long bonnet, short boot' roadster proportions that have long characterised that model line. The steeply-raked 'diamond'-style front grille was a new addition, elongating the appearance of the arrow-shaped bonnet and more closely copying that of the C-Class model that provides this roadster's engineware. Before we consider the inside, let's just take a moment to consider the SLC's electro-hydraulic vario metal folding roof. It works in just 16 seconds and from new could be specified with a glass top that came with a further 'MAGIC SKY CONTROL' option that'll turn the panel opaque at the touch of a button to shade the cabin from bright sunlight. Changes made over the SLK allowed the roof to work on the move at speeds of up to 25mph. And with this improved set-up, the boot separator will always automatically be moved into the right position to enable roof functionality. Get a car whose original owner specified the 'KEYLESS GO' option and the top can even activate from the keyfob. Of course, with the roof down, luggage capacity will be compromised - it's just 225-litres; that rises to 335-litres when the roof is up. Take a seat inside and again, you'll find that the evolutionary process led to a range of subtle changes. The revised sports steering wheel for example, perfect in size and thickness and lovely to hold with the perforated leather and contrasting top-stitching you get in the 'AMG Line'-trimmed model. Through it, you view a redesigned instrument binnacle, the two tubular instrument surrounds featuring black dials with red needles, the gauge faces on the sportier variant picked out with a chequered flag motif. Sports seats are standard of course, and they're very supportive for drivers of all sizes.

In our ownership survey, we came across a few owners with sticking roofs, so check that the mechanism functions faultlessly. One other owner had a power steering pump failure - and DAB radio tuner issues. We also heard reports of faulty software for the communications module for the eCall emergency call system. There was also an issue with defective nuts fitted to the track rod joints on the wheel bearing of the rear axle; check that the dealer recall for this has been carried out. Otherwise, it's just the usual things. Look out for the usual scratched alloy wheels. Obviously insist on a fully stamped-up service history.

The SLC was very much an evolution of the SLK it replaced, which is a good thing in our book. What you get is a sleek two-seat roadster that corners with ease and plenty of poise. It also steers accurately and precisely, with none of the shimmy or flex that some convertible cars suffer when dealing with bends or broken roads. Go for a model with 'AMG Line' trim and you get firmer 'Sports' suspension that lowers the car by 10mm but delivers no detriment to comfort or agility. Key improvements made as part of the evolution into this SLC model included the addition of a sophisticated 9-speed 9G-TRONIC automatic gearbox that almost all customers will want. Plus there's a 'DYNAMIC SELECT' driving modes system that allows you to alter steering feel, throttle response, gearshift timings and stability control thresholds to suit the way you want to drive. Under the bonnet, the key change over the old SLK was the installation of a twin-turbo 3.0-litre V6 in the top full-AMG model to replace the previous throbbing V8. Otherwise, the mainstream engines were carried over from the previous SLK line-up, with SLC 200 and 300 variants sharing the same 2.0-litre petrol turbo engine and respectively offering either 184 or 245bhp. Alternatively, buyers can opt for an SLC 250d diesel variant that develops 204bhp and puts out 500Nm of torque, yet still manages 70.6mpg on the combined cycle and 114g/km of CO2 (both NEDC figures).

Back in 1996, the Mercedes SLK re-invented the coupe-cabriolet concept for the modern age. Its SLC successor continued that evolution. This car after all, demonstrated that a sports car of this kind doesn't have to be uncomfortable to drive in town or on long trips. It need cost no more than a family hatchback to run. It can make you feel at one with the elements even when the roof's up. And when you can go al fresco, the coldest day can feel almost as warm as it would be were the top to be closed. These are all attributes that rivals from this era struggle to match, even if some of these competitors might be cheaper - or sharper through the bends. The Mercedes brand understands its target audience and in this SLC, brought us a contender that'd become more finely attuned to its market than ever before. If you're one of those believing a two-seat roadster to be a selfish and irresponsible indulgence, the Three Pointed Star here might just persuade you otherwise. 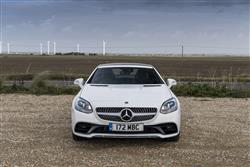 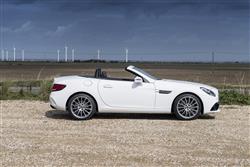 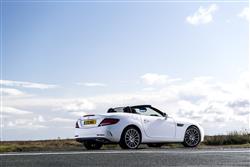 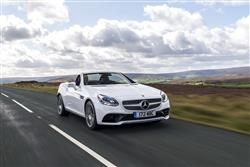 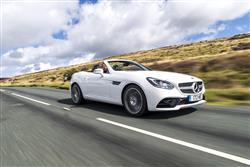 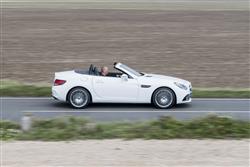