The Mercedes Vito is a van that knows its business. This 'W447'- series MK3 model, launched in 2015, offered the option of front wheel drive and a smaller 1.6-litre diesel engine to Vito customers for the first time, as well as greater efficiency from the more familiar 2.1-litre diesel rear-driven variants. It was also smarter, quieter, better equipped and safer than its predecessor. But does the 2015-2020-era version of this quality mid-sized LCV make sense as a used buy? Let's find out.

One of the things you learn early on in business is that the cheapest options aren't always the best ones. And that the way you deliver your goods says plenty about them. Both things explain the appeal of the Mercedes-Benz of medium range vans, this model, the Vito. It was first launched in third generation form in 2015. The Vito model line dates all the way back to 1996 when the first generation 'W638'-series model first hit the showrooms, replaced by a second generation 'W639'-series design in 2003. Both those LCVs could only be had in rear-driven form, but from launch in 2015, this MK3 Vito widened its appeal by also offering front wheel drive to customers of its lowest-powered engine. That proved to be a good move, leading to over 530,000 sales of this 'W447'-series design in its first five years of production. There was a wide-ranging facelift in mid-2020, but it's the earlier 2015-2020 versions of this MK3 model we look at here.

Basing any van on an up-market MPV is always going to help its aesthetics - and so it proves here. The Vito is essentially the commercial vehicle version of Mercedes' V-Class luxury MPV, so as with that MPV, you get slippery aerodynamics and a purposeful look, with an arrow-shaped bonnet flowing down into a nose section that, with greater crash protection, accounts for this MK3 model's extra 140mm of length compared to its predecessor. The Vito's wide door opening and well placed step mean that getting in is a simple enough manoeuvre and once seated aloft, you'll find a cab that's immaculately constructed and typically functional. That quality feel is exemplified by the smart three-spoke multi-function steering wheel, which isn't set at such a bus-like angle as you'll find in some competitors. Through it, you view clear, round, classy dials separated by an information display. We also highly rate the seats. Trimmed in tough black 'tunja' fabric, they're much more comfortable in this MK3 model than they were before, partly because the base cushion was made bigger and the backrest fashioned to be larger. And partly because a change to the contour of the bulkhead meant that they could be reclined by 83mm more than they could previously be. What about the business end? Well as usual with a mid-sized van, twin rear doors come as standard and can open out to either 90 or 180-degrees. All versions of this Mercedes come with a choice of either 2.8 or 3.05-tonne Gross Vehicle Weights: go for a standard 2.8-tonne front-driven variant and you'll be able to haul up to 955kgs about. A rear-driven Vito though, can do much better. You get an additional 3.2-tonne Gross Vehicle Weight option with this configuration and the result is the potential to carry a maximum payload capacity that could be as much as 1,255kgs - a class-leading figure. And loading capacity? Well, since Vito buyers don't get a choice of roof height, this'll depend entirely between buyers' choice of body length. The shortest 'Compact' bodystyle gives you 5.8m3 of capacity and 2,586mm of loadbay length. Move on to the 'Long' variant and you get 6.3m3 and 2,831mm of length. Finally, the 'Extra Long' version gives you a spacious 6.6m3 and 3,061mm of loadbay length. Three dimensions are the same for all Vitos though. First, there's a loading sill height over which you've to lump your cargo - that's 557mm. Then, the loading bay height - 1,195mm. And finally, the loading bay width - 1,685mm from side to side or 1,270mm between the wheelarches - just wide enough to slide in a Europallet. In fact, the most spacious 'Extra-long' derivative would easily allow you to fit three Europallets in line in here. Talking of pallets, you can also fit one in through the sliding side doors - there's one each side provided as standard. Keeping costs down will be a major priority for potential owners, people who'll be pleased to hear that from the launch of this model, Mercedes claimed across-the-board fuel economy gains of around 20% for this improved Vito.

Most of the Vito 'W447'-series owners we surveyed seemed very happy with their vans, but there were a few issues highlighted. In one case, the owner got a dash message 'Engine start not possible in 228 miles'; it turned out that the issue was that the AdBlue tank was full. Another owner had issues with the centre-dash infotainment unit in colder winter months when the reversing camera malfunctioned, along with the relating steering wheel controls. There were also some product recalls you should be aware of. Between March 2018 and October 2019, some Vitos were made with a fuel return line that may be damaged by contact with the underbody paneling. As a result, fuel may leak onto the road, posing a risk to the following traffic. Another issue concerned the right-hand side radiator coolant hose chafing against surrounding component due to insufficient clearance. Check that both of these issues have been attended to with the model you're looking at.

So what kind of business do you have? If its deliveries are primarily relatively light and local ones, then the 2015-2020-era Vito model you'd look at would be the affordable front-driven 1.6-litre version. It comes in two guises: there's a base '109 CDI' model with 88bhp, but we'd highly recommend you find the extra for the uprated '111 CDI' variant, which ups power to 114bhp. For longer distance work, heavier loads or towing, you should turn your attention to the Vito models that carried forward the previouis version's mechanical layout, rear wheel drive mated to twin turbo 2.1-litre diesel power. There's a choice of three models, the 136bhp '114 BlueTEC' variant we'd recommend - or a 163bhp '116 BlueTEC' derivative, which slots in just under the top 190bhp '119 BlueTEC' version. This top model gets a sophisticated 7-speed '7G-TRONIC PLUS' auto gearbox that's an option on the other 2.1-litre variants.

With this MK3 Vito model, Mercedes at last showed itself to be really serious about the medium range van segment. As a result, buyers really could from this point on consider an LCV bearing that famous Three-Pointed Star as a realistically-priced alternative to volume brand mid-sized LCVs they might have been thinking about. This was it. Previous Vito models had had to quite heavily rely on strong build quality, high residuals and brand equity to justify premium pricing. This one though, was good enough to take its rivals on directly, whether the measurement was one of price, payload or efficiency. Widening the range to include entry-level front-driven 1.6-litre models certainly helped in this regard but the improvements in efficiency made to the 2.1-litre models were almost as significant. The extra technology was welcome too, especially when it came to safety. Things weren't perfect with this mid-sized van of course. At launch, we commented that the cabin was very well built but could be a little smarter and more user-friendly. And we reckoned that there was clearly more work that Mercedes could do in terms of entry-level engine efficiency. Otherwise though, we reckoned then - and believe now - that a big step forward was made by Mercedes here - which holds this 'W447'-series Vito in good stead on the used market. Medium range Transit-class customers will always have cheaper options of course. Nearly all though, are lacking this van's one most crucial ingredient: Star Quality. 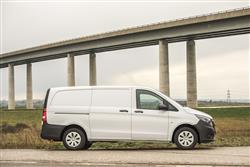 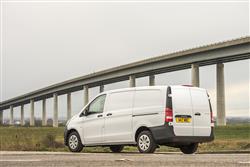 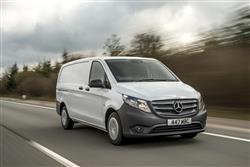 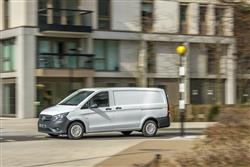 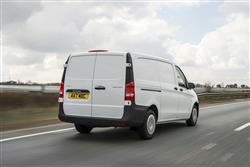 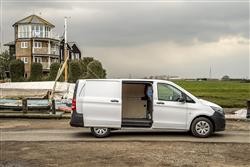