There's something about a drop-top MINI that can't help but put a smile on your face. That's what I thought until I drove one of the first generation cars and that smile was quickly replaced with a frown. The driving experience just didn't measure up to what I was expecting. It seems more than a few owners submitted similar feedback to BMW, that the engines were too coarse for a convertible and that the chassis needed to be stiffer if it was to guarantee MINI-style chuckability. It seems BMW listened. The second generation MINI Convertible is a far more enjoyable and polished piece of kit. Here's how to bag a good used one.

When BMW gave the MINI range an overhaul in 2007, it wasn't perhaps quite as thorough as it could be. While the hatchback models got sparkly new engines, with the Clubman following suit in 2008, the MINI Convertible soldiered on with the old Chrysler-sourced engines. With sales slowing, MINI finally got round to remedial action in 2009. The resultant Convertible was a revelation. Offered in 120bhp Cooper and 175bhp Cooper S guises initially, both cars using a Peugeot/BMW-derived 1.6-litre petrol engine, demand was instantly strong. A 211bhp John Cooper Works edition debuted at the 2009 Geneva Show using a revised version of the turbocharged 1.6 found in the Cooper S. MINI One and Cooper D variants were added in the following year with the punchy 2.0-litre Cooper SD arriving in summer 2011.

The automatic canvas roof of this car can be fully retracted or closed, using a roof-frame mounted toggle switch, in just 15 seconds. In the event of a driver being caught unexpectedly by a sudden downpour, this function will fully operate with the car at speeds of up to 20mph. As an alternative to the complete top-down driving experience, the full-width of the electric roof can be retracted by approximately 40cm to create the effect of a sunroof. This function can be operated at speeds of up to 75 mph. Unlike its predecessor's fixed anti-roll bars, the Mk2 model features a single-piece roll bar situated behind the rear seats, ensuring passenger safety in the event of a crash. The roll bar will extend in milliseconds at the point of impact to protect the car's occupants should the car overturn. Clever use of space means the luggage capacity of the MK2 car is considerably improved, at 125 litres roof-up, 170 litres roof-shut and 660 litres roof-up and rear seats folded.

Most of the teething troubles that afflicted the previous generation MINI have been laid to rest with the latest car. The 1.6-litre petrol engines, built in the UK at Hams Hall and shared with Peugeot, are some of the best in their class and have proven a good deal sturdier than the 1.6-litre powerplants of the older car. Likewise, interior quality has moved on leaps and bounds. Where the old car would often twitter like the queue for a Justin Bieber gig, the latest car seems to be built of sterner stuff. Customer reliability indices suggest that owners are happier with this generation model as well. Check for uneven tyre wear on the Cooper S and JCW models.

This second generation MINI Convertible feels a much more solid thing than its predecessor, yet weighs just 30 kilos more. It isn't very rapid in 98bhp 1.4-litre MINI One or 122bhp 1.6-litre MINI Cooper guises, but pulls quite nicely in diesel form, with a freshly developed 112bhp 1.6-litre unit. Real performance though, starts with the 184bhp Cooper S version, where rest to sixty takes 7.3s on the way to 140mph and there's 240Nm of torque. In the tuned John Cooper Works model, power is upped to 211bhp and 0-60mph takes just 6.9s. As for the go kart-like handling you expect from a MINI, well this drop-top version isn't quite able to exactly replicate the fixed-top model but it now gets pretty close, thanks to improved stability and grip, plus quick, accurate and nicely-weighted steering and ride quality that remains firmer than some will want. Resist the temptation to ruin it completely by specifying larger alloy wheels. What isn't in doubt is the improvement in rearward visibility, roof up or down, which makes a significant difference to this car's day-to-day usability.

If you tried an early MINI Convertible and didn't rate the experience, you ought to give the second generation car the opportunity to change your mind. It's been improved in virtually every regard and despite a certain ubiquity, it still makes a very appealing soft top selection. There's no shortage of used stock so be choosy, haggle hard and enjoy. 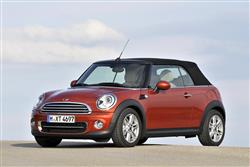 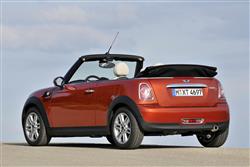 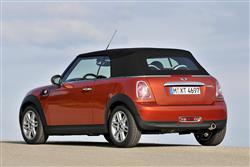 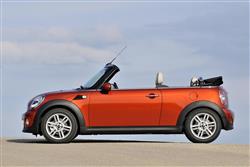 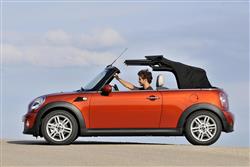 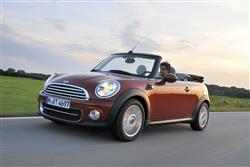