Elegant? Maybe. Focused? Certainly. Individual? Absolutely. This Coupe model proved to be a dramatic twist on the MINI theme at its launch in 2011. Racecar looks are matched with race-ready handling, plus realistic running costs and surprising practicality. It's everything you wouldn't expect and it's shook up the affordable coupe sector in a way that few other cars could have done. Is it a good used buy though?

We've had over half a century of Mini motoring. But never anything quite like this. The MINI Coupe was launched in 2011 as essentially the first standard model two-seat MINI. This variant was the first to feature a notchback shape with a recognisable boot. And it was the first to stop hassling small sportscars and become one itself. It was this final step that of course was the largest and most significant. Just as the launch of the original 5-door Countryman sent this ambitious brand into a whole new Crossover family market, so this Coupe moved the marque away from hot hatches and into contention with some of the most talked-about two-doors in the industry, cars like Peugeot's RCZ and Volkswagen's Scirocco. Maybe even the Audi TT. Cars that make a sporting statement without needing a lottery win. Cars we all thought were stop-in-the-street sensational - until we saw this one. It's not a look everyone will like. But it's one everyone will notice. And isn't that part of the point of the purchase of a car of this kind? The Coupe bodystyle spawned a Roadster open-topped version in 2012. And lasted until shortly after the third generation modern era MINI Hatch was launched in 2014.

Love it or hate it? You'll be in one camp or the other when it comes to the styling of this MINI Coupe. Pen-man Anders Warming said he was inspired by the efforts of the British tuning firms who tried to create a coupe version of the original Mini back in the Sixties and came up with curious oddball designs like the Mini Marcos and the Broadspeed GT. Either that or he designed this car on speed. It is, after all, to say the least, a little unconventional, sitting 23mm lower than an ordinary MINI, the dramatically raked-back windscreen leaning into a so-called 'helmet' roof design that looks either like a backwards baseball cap or like someone's sat on the rear end, depending upon the charitability of your perspective. To us, with its racy stripes and contrasting roof colour, it looks like one of those detachable hardtops that customers of some convertible cars buy to clip on and get themselves through the winter and in a way, though the structure is permanent, that's kind of what it is. You can also, you see, buy this design in 'Roadster' open-topped form, a shape that sits a lot easier on the eye but lacks the aesthetic extremity that makes this Coupe rather endearing. The active rear spoiler that rises out of what looks like a bootlid is an example of that. And talking of bootlids, this was the first booted notchback shape the brand had ever brought us, assuming you discount original Sixties spin-off saloons like the Riley Elf and the Wolseley Hornet. Both of those cars looked practical but weren't. In contrast to this one that looks ridiculously cramped but isn't. It hasn't actually got a boot in the conventional sense - the three-box shape actually disguises a lengthy and rather heavy rear hatch - but that's all to the good when it comes to practicality. Lift it up and, like us, you may be astonished to find that contrary to appearances, this has a very large luggage bay indeed, at 280-litres big enough for a couple of golf bags and the biggest of any MINI bar the Countryman, a car that sits on a much bigger, very un-MINI-like platform. In other words, nearly double the space you'd get in an ordinary MINI hatch and 20-litres more even than is offered by the Clubman estate version, though it's true that the space is shallow and the floor uneven. The reason for this becomes clear when you take a seat in the cabin - namely that the tiny back seats of the MINI Hatch have been completely ditched. Which is just as well, for with a roof height dropped by 5cm over the ordinary model, rear occupants would have needed to be dwarf-like. So instead of a couple of useless pews, you get a storage shelf, plus a hatch through to the boot through which you can poke skis or long items up to 1.7m in length. Or indeed reach back into the boot to retrieve small items. Behind the grippy three-spoke wheel, it's a mixture of old and new. The familiar huge central speedometer in the middle of the smartly-trimmed dash (which you tend to ignore in favour of the digital speed readout in the middle of the circular rev counter that sprouts from the steering column directly in front of you). Plus the usual chromed toggle switches. Less familiar is the cocooning feel created by the raked-back windscreen and lowered roofline, recessed above each of the seats to accommodate taller folk. What To Look For

Generally, build quality on the MINI Coupe is pretty strong - certainly much better than you'd have found on anything based on a first generation MINI model. However, secondhand examples do tend to sometimes suffer from teething rattles, especially in areas like the rear parcelshelf. We've had reports of the boot unlock button not working on the keyfob too. One owners we came across reported a faulty active spoiler - so make sure that works. And a number of Coupe buyers have found that the ride is rather over-rough: apparently, a cure for that is to fit a set of Continental Contisport3 205/45 R17 tyres.

You can't help approaching a drive in this MINI Coupe with a sense of anticipation. At rest, doors open, it looks like a World Championship Rally Car at a staging service. Poised, ready to go on tarmac, it's like something from the grid at the Le Mans 24hrs.What on earth will it be like inside you wonder? Like a MINI of course, is the answer, but not quite as you might know it. The dashboard is the same as any ordinary MK2 model. So is much of the switchgear. What's different is the steeper rake of the windscreen, just enough to create a more focused feel to the cabin. If you're at the wheel of one of the pokier versions like the fiendishly fast John Cooper Works model, your heart beats a little faster as you grasp the beautiful alcantara-trimmed steering wheel and fumble for the lozenge-shaped key you slot into the dash prior to punching the starter button and firing the turbo engine into life. It's almost a disappointment that it doesn't flare up like a two-stroke kart, but aural fireworks at idle are less important than passion under power. The engineware for the Coupe is exactly the same as that provided for spicier versions of the ordinary MK2 MINI Hatch. All derivatives have 'Cooper' badges in homage to John Cooper, legendary F1 designer, which means that petrol power is provided by the usual BMW-developed, British built 1.6 in normally aspirated 122bhp form and turbocharged 184 and 211bhp trim. The most potent of the three units is the one fitted to the John Cooper Works model that fires this car to sixty from rest in just 6.4s on the way to 149mph to the accompaniment of a wailing soundtrack and a crackling over-run. Even the much more affordable Cooper S version manages 6.9s and 143mph, while the entry-level Cooper model delivers 9s and 127mph. As every performance person knows though, torque - pulling power - has far more to do with real world speed than 0-60 stats and for this, the Coupe king of the range is the 2.0-litre 143bhp SD diesel version which has 305Nm of it, enough to steam to sixty in 7.9s on the way to 134mph. So those are the stats. Good enough to make this John Cooper Works model the fastest volume-produced MINI ever made, but only by virtue of a fractional aerodynamically-induced gain over the identically-powered Hatch version. We're getting a bit tired of all the MINI advertising with its continual 'adventure' nonsense and constant references to 'go kart' handling. Here though, is a derivative that really does deliver a go-kart-like experience. You sit low down, squarely in the centre of the chassis, the lightweight alloy wheels shod with ContiSport rubber pushed right to the corners of a bodyshell that's had every excess pared right away for light, lithe response. You've bespoke-designed suspension that involves you right from the start, even if it is tuned for smooth roads and racetracks rather than lumpy British lanes, one reason why we wouldn't make it firmer still by opting for a version fitted with the optional stiffer sports suspension or worse, the rock-hard John Cooper Works damping set-up. We're less convinced by the rather artificial feel of the electric power steering to be honest, even when you firm it up by pressing the little black 'Sport' button down by the gearstick. This mode is also supposed to produce a rortier engine note (which is difficult to detect) and sharper throttle response (which isn't really necessary). A more carefully engineered 'sport' option is found in an extra-cost package that original owners could specify (standard on the John Cooper Works model) that added DTC Dynamic Traction Control and EDLC Electronic Differential Lock Control, both there to complement the standard DSC Dynamic Stability Control. It's all there to reduce wheelspin from rest and through tight corners and it's a tractional treat when conditions are a bit greasy. For MINI magic through faster bends, engineers in search of an extra 40kgs of downforce came up with the marque's first lifting spoiler, which police in 40mph zones will note automatically rises at 50mph, then sinking back into the bodywork when your speed falls back to 37mph. It's slick, just like the carefully considered ratios of the 6-speed manual gearbox designed for mid-range punch rather than highway cruising that'll be rather noisier than some buyers might want. Still, this is a sportscar so you might forgive it that. Exactly as those rakish looks promise.

It's ironic that in two unexpected areas - practicality and running costs - this MINI Coupe is so damnably sensible because overall, this is the kind of car in which sense and sensibility should matter very little in the purchase decision. Leave the supercars to lottery winners: this is the kind of way that enthusiast buyers in the real world can reward themselves and buy something selfish, fun and very, very fashionable. We're aware that not everyone will see it like that. Some will stare down the unconventional looks of this car in abject horror - but then, maybe that's why we like it. A personal purchase should be just that: personal. Individual. Bespoke. And able, when used as intended, to plant a very wide grin across your face. This MINI can do exactly this. And in that respect, it's everything the brand should be. 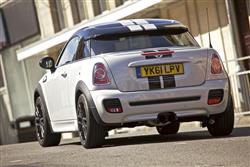 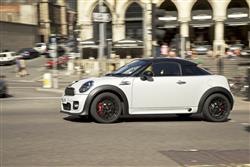 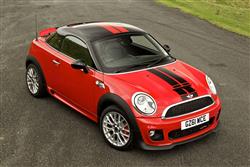 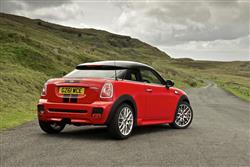 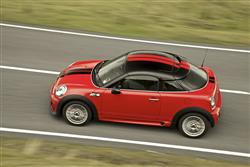 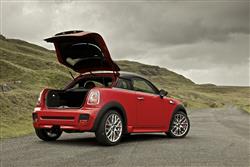