The most affordable route into the third generation MINI Hatch is with this improved 1.5-litre three cylinder One model. It's a surprisingly appealing confection. Jonathan Crouch reports

Smarter and better equipped, this improved entry-level MINI One hatch model is now more appealing and features a frugal 1.5-litre engine. The styling is much as before with only subtle differences being apparent to MINI anoraks, but the cumulative effect of a range of small but subtle changes is that this is now a better car than it used to be.

You know what? The best way to enjoy the current MINI Hatch is to do yourself a favour and forget the old Mini. Yes, the original, tiny Alec Issigonis one. Put it to bed, consign it to the past and let collectors show and shine them. Times have changed. We want cars that are safer, more efficient, better equipped and, yes, bigger. If you're still hung up on as pects of this so-called 'new' MINI, perhaps you need to accept that and move on because be in no doubt, this is now an excellent vehicle and one that has exceeded paymaster BMW's most optimistic expectations when it originally embarked on this project. The first MINI appeared in 2000 and was an instant hit, despite being powered by some fairly crude engines. That model was replaced in 2006 by the second generation car which got a better chassis and vastly more efficient engines courtesy of a joint venture between BMW and PSA Peugeot Citroen. By 2012, 2.5 million MINIs had been sold and a third generation model was being developed. That's the car you're looking at here, launched in 2014. The brief with the MK3 version was clear. Better quality, better fuel economy, better pedestrian impact protection, more equipment, more space, more innovation. Has the latest car lived up to its billing? Let's mark its card in entry-level 1.5-litre petrol 'One' guise.

So what's changed in the engine department? Well the 1.2-litre engine that was originally fitted to his model has been replaced by a three cylinder 1.5-litre unit with 190Nm of torque, 10Nm more than before. MINI also says that minor changes have been made to its TwinPower Turbo Technology, improving engine electronics, oil supply, intake air ducting, the cooling set-up and the exhaust system. As before, the chassis is BMW's clever UKL1 platform which also underpins a number of front-wheel drive BMW models. This 1.5-litre unit shades its 1.2-litre predecessor in almost every way, not least when it comes to the extra pulling power on offer. It's decently quick off the mark too, the 0-62mph sprint occupying 10.2s en route to 121mph. Those are the kind of figures you'd have expected from the hotter Cooper version not so long ago. Drive the car and if you haven't yet tried a third generation new MINI, straight off the bat you notice that a few things are different. The driving position feels a bit less upright and the fascia is smarter. There aren't so many obvious attention-seeking gimmicks. That massive dinner plate speedometer that used to sit in the middle of the car has been ditched, replaced by a rather more useful multifunction display. Plus I love the starter tab on the centre console. It's just that much more tactile than a boring button.

The MINI One is available with either the usual three-door bodystyle or the extended five-door bodyshape. As for what's changed with this revised model, well the styling doesn't look all that different, but close inspection will reveal a range of subtle updates. The front-view is dominated by a larger radiator grille with a black, hexagonal surround, flanked by the hallmark round MINI headlights. The position lights have been replaced by vertical air inlets to optimise aerodynamics and the central bumper strip is now in body colour, rather than black. The wheel arch has new contours, the side indicators have been redesigned to feature LED technology and at the back of the car, the fog light is now integrated into the rear apron as a narrow LED unit. Otherwise, this third generation MINI 3-Door Hatch retains the basic overall body shape that we all know and love, with its squat, purposeful look, helped by the tapered glasshouse. It's a touch larger than you might expect inside too - or at last it is provided you haven't been consigned to a rather cramped seat in the back: if that's an issue, you ought to be considering the alternative five-door version of this model - or perhaps the MINI Countryman SUV. Still, access to the rear isn't too bad and the rear bench seat splits 60:40. Boot volume is a supermini-like 211-litres. There's also decent interior stowage space, with cupholders and storage cubbies. Interior updates include the standardisation of MINI's largest 8.8-inch centre touchscreen display and Piano Black high-gloss surfacing. Chrome elements have been significantly reduced throughout the interior with the two outer air outlets framed by black panels. The internal air vents have been completely redesigned and are now embedded to be flush with the interior surface. Plus the sports leather steering wheel has been redesigned and conventional analogue instrument dials have been replaced with a digital display.

Prices open at £16,800 for this base petrol-powered One in 3-Door form; there's a £700 premium for the 5-Door body style. Only base 'Classic' trim is offered with the One variants. There's a £1,400 premium if you want the Steptronic auto transmission. What does this model's asking price buy you in terms of equipment? Well, for the sake of argument, let's assume that you're one of those vanishingly rare people likely to walk into one of the company's dealers and hand over the asking price for an entry-level MINI One variant with no options at all. Although the badge on the back, the smaller wheels and the non-contrasting roof won't fool your friends into thinking you drive a Cooper, your 'One' will nevertheless come with front foglamps, daytime running lights, power heated door mirrors, air-conditioning, Bluetooth connectivity, power mirrors, a keyless starting system, a trip computer, the MINI central display with illuminated ring and a decent quality DAB stereo featuring both aux-in and USB sockets. Not bad. Safety-wise, in addition to ABS anti-lock brakes, electronic brake force distribution, cornering brake control with brake assistant, the driving stability control system in the MINI includes a drive-off assistant, brake dry function, fading brake support and dynamic traction control (DTC). This system permits controlled slip at the drive wheels so moving away on loose sand or deep snow is a bit smoother. There are front and side airbags as well as curtain airbags for the front and rear seats, automatic passenger airbag deactivation and front and rear ISOFIX child seat mounts.

The entry-level engines in most small car ranges are usually tired old nails left over from the previous generation and snare unwary customers attracted to the car's low price but unaware that fuel economy will be distinctly old-school. Not so with the MINI One. In 3-Door form, is 1.5-litre three cylinder petrol unit will return a combined cycle reading of up to 52.3mpg and emit up to 122g/km of CO2, though you'll dent those figures by about 5% if you opt for the automatic gearbox. Insurance is group 13E. An innovation lies with the MINI Driving Modes, another optional extra. Using a rotary switch at the base of the gearstick or selector lever, drivers can swap from the default MID mode to either SPORT or GREEN. The three choices offer a set-up which is either performance-oriented, comfort-biased or geared towards fuel efficiency. The latter includes a coasting mode when the driver removes their foot from the accelerator pedal. MINI Driving Modes also influence the ambient lighting, shift characteristics of the automatic transmission and the Variable Damper Control - if that extra cost option is selected.

Just because this MINI is a bit bigger in this third generation guise, don't think it's succumbed to a bit of middle-age spread. It's still just as much of an entertainer as ever - even in this baseline petrol guise. If you can't quite stretch to a petrol Cooper variant, then you don't now need to feel short-changed by opting for his more affordable green pump-fuelled 'One' model. Overall, I like what MINI has done here. The company has made the car feel reasonably spacious and a little more classy but where most companies manage to surgically remove the fun factor when they try this, MINI has left it intact and in some cases boosted it. You may argue over the aesthetics and we'll all have a viewpoint there, but in every other respect, this is a significantly improved car. 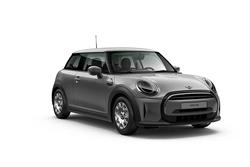