Mitsubishi have always recognised the role that electricity can play in powering cars. After forty years of powertrain development, they were the first to launch a pure electric model in our market, then followed that up in 2014 with this car, the Outlander PHEV. This was the world's very first 4WD Plug-in Hybrid SUV and it's created quite a stir. A careful package of improvements introduced in 2015 continued that sales momentum, creating a smarter, quieter and more appealing product. It's that post-2015-era Outlander PHEV we look at here as a used buy.

The third generation Outlander SUV was the car that rejuvenated Mitsubishi's sales in this country. The reason why can be explained with four simple letters - 'PHEV'. Industry-leading Plug-in hybrid technology gave the Japanese brand an advantage over most of its rivals in this segment, in the 21st century's second decade giving the Mitsubishi marque a degree of notoriety in our market it hadn't had for years. After considerable initial sales success, this model was significantly revised in 2015. There are limitations to Mitsubishi's cleverness here. The bulkiness of the mechanicals needed with Plug-in hybrid motoring prevents this petrol/electric variant offering the useful third row seating you'd get with an Outlander from this era powered by a conventional diesel engine. For the same reason, the PHEV variant's fuel tank is smaller too, which is one of the reasons why you don't get the same kind of total operating range that you would with the diesel version. Still, the advantages of Plug-in hybrid technology this car delivered to its owners were significant and in 2015, Mitsubishi moved to embellish them with a package of changes that included a far-reaching facelift. This particular version of this car sold until mid-2018, when it was replaced by a further revised 2.4-litre version. It's the 2015-2018-era 2.0-litre PHEV Outlander model that we look at as a potential used buy here.

This improved post-2015-era third generation Outlander certainly looks a whole lot sharper than the original version of this MK3 model did. In place of the rather apologetic looks of that car, we were, with this facelifted model, treated to smarter, more confident styling exemplifying what Mitsubishi called its 'Dynamic Shield' design direction. That gave us a lower, leaner and wider bodyshape, yet one still continuing with the high flanks, the raised beltline, the uncluttered surfaces and the strong shouldering that originally defined this model. Behind the wheel, this revised model got a smarter 'black ash' dashboard, padded door panels and a stitched instrument cowl, all of it adding to the cabin ambience. The things commonly interact with are much better on this facelifted model too, with a classier silver-trimmed 'joystick'-style gear lever next to a handbrake that, rather surprisingly for such a futuristic car, is of the conventional kind. In the second row, there's reasonable space for two adults - or three at a squash, with the third person's cause aided by the way that the central transmission tunnel has been kept usefully low. And luggage space out back? Well in this five-seat-only PHEV model, there's 731-litres of space - only 50-litres less than you'd get in the diesel version with the luggage area chairs folded. If you need more space, then folding the second row backrest frees up 1.85m of floor length.

Many Outlander PHEV owners in our survey were very happy with their cars, but inevitably, there were a few issues. One customer had his car continually off the road for a problem eventually traced to an issue with the 'connectors' in the battery compartment. Other complaints related to rattling front head rests and an alarm prone to go off for no reason. More seriously, one owner found that after a safety recall, his car was failing to discharge the battery as its primary power source, meaning that the powertrain continually reverted to petrol power when there was still available battery charge. It's extremely unlikely that this Outlander will have been seriously used on rougher surfaces (particularly if it has a higher-spec trim level), but just in case, check the underside of the car for dents and scrapes. It's more likely that you'll find scratches on the alloy wheels caused through ham-fisted parking. Check out the rear seat for scratches caused by unruly children. And of course, insist on a fully stamped-up service history.

This Outlander's 'Twin Motor 4WD' system combines petrol power with the output from two electric motors, one to drive each axle, both being fed by a 12kWh battery mounted between the axles. The whole set-up develops a combined output of 200bhp and gives willing performance, along with some astonishing efficiency figures. These were further improved with this post-2015-era model, claimed at 156.9mpg on the combined cycle and just 42g/km of CO2. Drive the car hard and of course, you won't achieve anything like these returns. Keep the car charged up and only use it for short distances though and you'll actually better them by driving in an all-electric 'EV Drive Mode', a setting in which Mitsubishi reckons you'll be able to travel up to 32.5miles. Push on a little and your Outlander PHEV will switch into its second 'Series Hybrid Mode' where the engine generates extra power for the electric motors. Beyond that, there's a third 'Parallel Hybrid Mode', which adds the resources of the petrol engine driving the front wheels for maximum performance.

You can see why Mitsubishi did so well with this Outlander PHEV in our market. Other family SUV rivals may be able to offer more power, sharper handling and fancier cabins, but ultimately, most of them are limited by yesterday's technology. This car though, was engineered for a different era. If you've never thought much of electric mobility as an automotive solution, we think it might convert you. 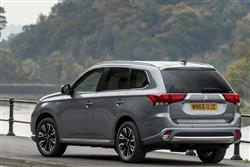 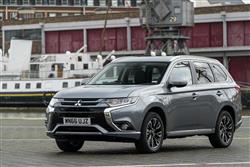 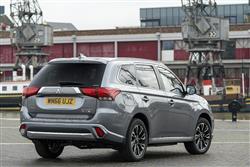 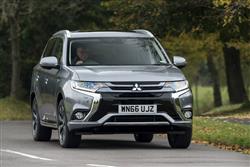 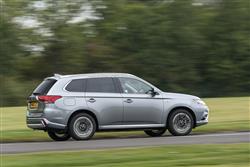 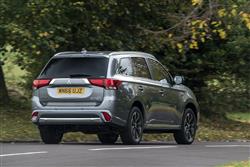