The Peugeot 107 has been part of the automotive landscape for so long, it's a car we almost take for granted. Yet if you're looking for an inexpensive used car, possibly for a first time driver, there's still very little to beat it. The cars we look at here are the facelifted models that served from early 2012 to the car's eventual run-out in 2014. Here's what to look out for when tracking down a used one.

Some cars seem to last forever at the top of their class, while others only enjoy a relatively short moment in the sun. That seemed to be the case with the Peugeot 107, a car that was dealt a real double whammy. The 107 was originally launched alongside its sister vehicles the Citroen C1 and the Toyota Aygo back in 2005. At first, all was rosy in Peugeot's garden. The Citroen was the cheapest and was also offered with a diesel engine. The Toyota was the plushest and most adventurously styled. The Peugeot, sitting somewhere in the middle with by far the most limited model line-up looked like it was going to struggle. Yet it managed to sell as many as both the Citroen and Peugeot combined, its value and badge equity seeing it through. A positive start then, but then came 2008, the Government's scrappage scheme and the huge success of Hyundai's rival i10 citycar in exploiting it. Peugeot didn't maximise the sales opportunities of this situation as well as its Korean competitor - and things got even more difficult in 2011 when the Volkswagen Group unleashed its trio of city cars; the VW Up!, the Seat Mii and the Skoda Citigo. Compared to these rivals, the 107 looked distinctly yesterday's news. With sales tailing off quite badly, Peugeot belatedly acted and refreshed the 107 in 2012, with a more modern front end, more equipment and realigned pricing.

Thankfully by 2012, Peugeot had emerged from that phase where many of its cars had a face that resembled a dozy basking shark and the facelift 107 is possibly a more handsome design than the original. The restyled 107 is instantly recognisable by the changes to the car's front styling, with a deeper lower front panel housing the front fog lights, LED daytime running lights and a redesigned front bumper. The design brief for the 107 was to engineer a compact car with a cheeky character that would appeal to young drivers, be versatile in use and, above all, be totally at ease in the urban environment. The length of the vehicle wasn't to exceed 3.5 metres, yet a whole host of safety features needed to be included, as well as enough wheelbase to accommodate the popular five-door body style. The 107 features some neat design touches too. The glazed-in area surrounding the rear window is finished in black, giving it a very distinctive rump, especially when the car is painted in paler colours. Within the revised trim levels introduced with this last facelift, features such as Peugeot Connect Bluetooth, USB and LED daytime running lights were made available for the first time on the 107 range. In addition to the additional optional gear, the restyled range also offered better equipment across the line-up, with air conditioning now standard on Active level versions and alloy wheels, rev counter, Peugeot Connect Bluetooth and USB included on Allure level variants. Surprisingly for such a small car, it is the five-door bodystyle (with 59.6% of total sales) that outsold the three-door model, underlining the 107's excellent packaging which makes the most of its interior space and belies its compact wheelbase to provide a vehicle capable of transporting four people in reasonable comfort. It all makes this a genuinely viable option for those with kids in tow.

The 107 might look lightweight but it's actually a pretty tough little thing. Build quality improved over the years as the Czech factory introduced more effective quality control measures but you might not know it when you sit inside the 107 and feel the rather scratchy plastics. Insist on a fully stamped up service record and inspect the car carefully for parking knocks and scrapes. The 107's plastic bumpers can shrug off some quite hefty scuffs without affecting their function but if there are abrasions use them as a negotiating point. The interior is very hardwearing, although the styling is now looking a little dated.

You can see why Peugeot never bothered to sell the 107 here with anything other than a 1.0-litre petrol engine, this unit properly reflecting the car's urban bias and offering a reasonably energetic sprint to 60mph that takes 14 seconds. The good news is the fact that this powerplant is predictably excellent in terms of fuel economy and emissions. The combined economy figure is 61.4mpg and emissions are pegged at an excellent 109g/km. The diesel engine this car could be ordered with in Europe would, for UK buyers, have put the asking price up considerably, with limited benefits in terms of economy and drivability. The 2-Tronic self-shifting auto gearbox is worth looking for if you don't mind the modest performance being blunted still further. To ensure the optimum safety of its passengers, the 107 relies on its structure for high speed impact protection - quite an accomplishment considering that a small car has to absorb impact energy quickly. Each passenger seat can accommodate a child seat, while the 50/50 split rear bench is equipped on both sides with appropriate fixtures incorporating three anchorage points for the installation of an ISOFIX child seat. This overall design placed the 107 in the best possible position to satisfy Euro NCAP criteria for the protection of occupants. In the design of the front of the vehicle and the layout of the different mechanical components of the 107, careful attention was paid to the consequences of a collision with a pedestrian. Thanks to a special impact beam in front of the bumper and a bonnet that creates the maximum possible distance between it and mechanical components underneath, pedestrian protection is maximised.

No matter where a car is priced from new, the used market is often a sound arbiter of talent. Cars that don't cut it are cheap as chips, while those that people genuinely do want hold onto their value well. The Peugeot 107 is a case in point. As a new car, even while it was still on sale, it was left for dead by the Volkswagen up! and that car's design stablemates, but the used market still values the little Pug, especially in the final post-2012 facelifted guise we've been looking at here. As an inexpensive city scoot that nevertheless features modern safety gear, this facelifted French shopping runabout has a lot going for it, with all versions getting ESP stability control and twin airbags. It may no longer be anywhere close to the cutting edge of city car technology, but used car buyers will find that there's a lot of life in the Peugeot 107 yet. 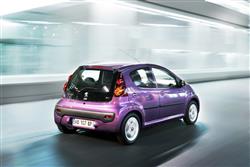 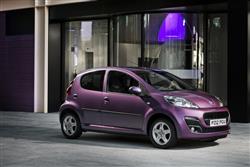 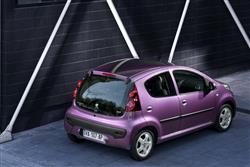 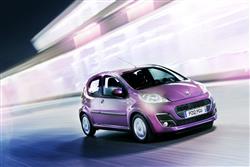 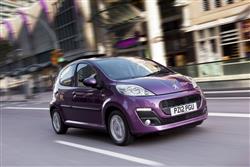