Peugeot's 108 demonstrated back in 2014 just how far city cars had come in recent years. In fact, this one's more sophisticated and efficient than you might ever have expected a model of this kind could be. This one was media-savvy, efficient and could even be had in open 'TOP!' form. Plus it was very personalisable. Let's check it out as a used buy.

Creating a city car is hard enough. Trying to differentiate a design shared with other brands must be even more difficult. Such was Peugeot's job with this car, the 108. The French manufacturer has a long history in the market's smallest segment stretching all the way back to the 104 model of 1972. From 2005 onwards though, it shared its presence in this sector with sister company Citroen and their C1 and Toyota with their Aygo. This trio of brands together created a single city car design tweaked in each case to their own individual preferences. And established a Czech Republic factory to affordably build it for the next nine years. To be frank, that period was rather over-long and by 2014, it was time for a re-think. For a car with more than one engine option, extra hi-tech, a bit more space and more complete safety provision. This 108 was that car. In all these areas, this model improved upon the standard set by its 107 predecessor - as of course did its very similar Citroen C1 and Toyota Aygo design stablemates. Of the trio, this Peugeot went for a classier, more mature look than the C1 and initially came with a 1.2-litre engine option you couldn't get in the Aygo. And all three cars were more efficient and personalisable than even the finest city runabouts from other brands. Most customers wanted this car in 1.0-litre form (that 1.2-litre engine option lasted only until 2018) and in conventional hatch guise (the 'TOP!' version with its fabric-folding roof was deleted in 2020). The 108 range sold until early 2022 and wasn't replaced.

Most 108 buyers we came across seemed satisfied. There was a report of a leaky boot. And apparently, the Bluetooth won't pair if the car's been parked on a hot day for too long: make sure that the central screen phone pairing system works properly for your handset. One customer complained of brake squealing and juddering. And another customer complained of window glass rattling. In another case, the hubcap nuts went rusty in all four wheels. A key 108 product recall in this period occurred in 2016 regarding the steering column, advising customers that a component within in it might not be to the correct specification and therefore there might be an issue with potential loss of control. There was also recall regarding rear seat belts; they might have incorrect stitching on the belt material connecting the buckle to the anchor plate. Make sure that both of these recalls have been attended to where necessary. Otherwise, it's just the usual things; check the interior for child scrapes - and the wheels and rear bumpers for parking scratches. And insist on a fully stamped-up service history.

More recent city cars seem to recognise that they won't always be used in the city. So here, refinement was improved and pokier engine options added. In fact, the two issues were here linked. From launch, the 108 offered a couple of petrol-powered three cylinder choices, with an 82bhp VTi unit from the 208 supermini arriving to join an improved version of the older 69bhp 1.0-litre unit. That 1.0-litre engine was unashamedly aimed at urban folk and might become a little aurally wearing if you were to use it over an extended motorway trip. If such a journey might be an occasional possibility, the 1.2-litre engine option (never incidentally available on this car's Toyota Aygo design stablemate) would be a better choice. But it only sold until 2018. In fact, if you'll be doing almost any kind of regular open-road motoring, then we'd say that the 1.2-litre variant will probably be a better bet because overtaking is so much easier. The 1.0-litre model takes a yawning 29.8 seconds to accelerate from 50-70mph in its top 5th gear. In the 1.2, the same increment occupies just 15.9 seconds. Enough said. We'd suggest that this stat tells you a lot more than the usual 0-62mph reading, but for the sake of completeness, we'll give you that too: the 1.0-litre model takes either 14.3 or 14.6s, depending on whether its engine has stop & start fitted. The 1.2-litre model manages the same benchmark in 11s. Having said all of that, there are a huge number of buyers in this segment who will only be using their cars on short shopping trips, people who'll probably have access to another vehicle for longer journeys. For these folk, the 1.0-litre VTi version of this 108 will probably be quite sufficient. This Toyota-engineered 998cc unit was improved for this car, the specific changes including a higher, compression ratio, an improved combustion chamber design and use of a low-friction timing chain, all these things combining not only to improve efficiency but also to boost power slightly over the previous 107 model, which only came with the earlier version of this engine. If you were familiar with that car, then you should find this one to be a touch more driveable. For a start, in the old 107, you needed to really wind some revs onto the clock in order to get anywhere - which had a marked effect on your fuel consumption. In this car, nearly all of its 95Nm of pulling power is available right down low in the rev range, from as little as 2,000rpm. That means you won't need to rev the thing to death in order to get it going, though if you do, the 998cc unit sounds playful, its normally aspirated note filling the cabin with a characterful three cylinder thrum. This also has the advantage of making the car feel peppier than it actually is. Once you've covered a few miles, the first thing you'll probably notice is just how light most of the controls are - especially the steering and the clutch. The exception to this is the gearchange, which needs more of a firm shove than you'd expect from a car designed with urban driving in mind. If that's an issue, then you might well be tempted by a model fitted with the automatic '2-Tronic' gearbox. That auto variant will certainly suit urban-bound folk, people who'll also appreciate the tight 4.8m turning circle and that light steering we mentioned. Parking is as easy as you'd expect in a car with an overall length of under 3.5m, with good all-round visibility marred only slightly by the chunky rear C-pillars. The wide rear wheel arches might be a bit vulnerable here but on top variants fitted with the multimedia system's standard reverse parking camera, that shouldn't be a problem. The big, clear mirrors should help too. The brakes also feel up to spec, despite this Peugeot doing with without rear discs and opting for a cheaper rear drum set-up instead. And handling? Well the development team behind this car say that they benchmarked the Ford Ka in this respect, one of the results of which was that the steering was made 14% more direct than that of the old 107. True enough, it does provide more fingertip feedback than before. Other incremental dynamic improvements include re-tuned springs and dampers, plus a lighter rear torsion beam, one of the things contributing to a 60kg weight saving over this model's predecessor. The result is a slightly more agile, chuckable city runabout that could be driven with a bit more vigour but it still wasn't the driver's choice in this segment, though that's something few likely buyers will care much about. Pitch into a corner and you get the predictable helping of body roll and tyre squeal you'd expect from this kind of car. Stick with it though and this 108 can, nevertheless be pretty good fun to pedal along, It might perhaps have been sharper in this respect had not Peugeot's engineers - rightly - been so mindful of the need to preserve a decent standard of ride quality. Because they were, this car handles road humps and potholes very well. It's that bit better in this respect than its predecessor. In fact, as you've probably gathered by now, almost everything about this 108 was that bit better than was the case with the old 107. No radical steps were taken here: the car just feels that bit more sophisticated and grown up.

There's one man who, more than any other, knows Peugeot citycars inside and out. Having previously been Chief Designer of the old 107, Ivo Groen also took on the role of Design Director for this 108. Asked if the differences between the two models made them like chalk and cheese, he demurs: "No, in fact, they're like cheese and cheese because they share the same roots. But while the 107 is the kind of cheese you would have with a baguette, the 108 is a cheese you would want to eat with a nice glass or red wine!" There's something in that. This car does indeed feel a touch more sophisticated, not only than its predecessor but also in comparison to its two design stablemates, the Citroen C1 and the Toyota Aygo. Of course you may not care about that and if so, this car might have a harder job to win you over, particularly since, like its Toyota and Citroen counterparts, it still isn't as spacious as some other competitors in this segment. Its other attributes are compelling though: class-leading efficiency and enough clever infotainment to ensure that the fashionistas can Facebook their friends on their way to eat designer sushi. It was a car of our times and a city statement of intent. 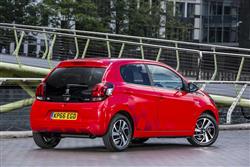 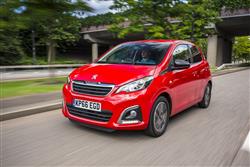 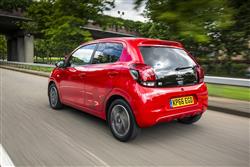 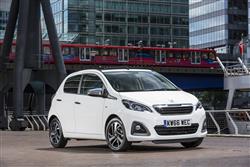 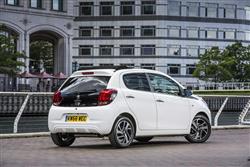 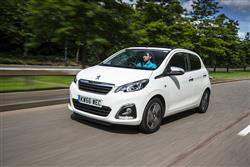