Peugeot's second generation 2008 is a small SUV that offers an arguably more sophisticated take on the kind of little urban Crossover-style design popularised by cars like Nissan's Juke. Supermini-based, it offers all the advantages of that compact runabout you were thinking of, together with the kind of added space, style and light off road driveability you probably never expected to be able to enjoy on a small car budget. This MK2 design gets a new platform, a fresh look and a completely redesigned interior, all of it targeting what the brand hopes will be a younger buyer. There's an all-electric version too.

Fashion can take many forms, especially when it comes to segments in the automotive market. Here, we're going to look at one of them, the supermini-based compact SUV Crossover, epitomised in this case by this second generation version of Peugeot's 2008. Its chosen sector may be fashion-led but here's a car that still emphasises sense and sensibility in what has become an ever-more competitive class. Over half a million versions of the first generation 2008 were sold and Peugeot has similarly high hopes for this, its successor. It switches to a properly modern chassis, the CMP platform for B and C segment cars that's used by the MK2 Peugeot 208 and also shared with the DS 3 Crossback and the new Vauxhall Corsa. Crucially, this can support both fossil-fuelled engines and all-electric powertrains - and does in this case. Will it all be enough to allow this contender to retain its place as one of the more popular picks in this sector? Let's find out.

Despite its beefy looks, the 2008 is still front-wheel drive only. Engine-wise, there are three very different powertrains to choose from. If you know the Peugeot brand, you might not be too surprised to hear that the available petrol unit is the 1.2-litre three cylinder PureTech powerplant, in this case developing either 100, 130 or 155hp. The base version is manual only and the 130hp model is optionally available with an 8-speed EAT8 auto gearbox that you have to have on the fastest derivative. The diesel is the company's usual 1.5-litre BlueHDi engine with 100hp. As for the all-electric e-2008 version, well just one variant of that will be available featuring a 50kWh battery mated to a 100kW electric motor, this confection developing a healthy 134hp and offering a claimed maximum WLTP range of 193 miles. Of course, as you'd expect in a modern supermini-based small SUV, you can get all the usual driver assistance features. things like lane keep assist to stop you from drifting out of your lane, with subtle steering intervention to ease you back to where you ought to be. And an autonomous parking system which is capable of automatically controlling acceleration, braking and steering when entering or leaving a parking space. there's also a traffic sign recognition system that can work with the integrated speed limiter and make sure that you never exceed the stated limit of the road you're on.

The 2008 features a higher driving position than the 208 and it's longer too. Visually, it resembles a smaller 3008, being only 150mm shorter than that car, even though it sits on the PSA Group's small car platform. Peugeot's Exterior styling director Yann Beurel has given the 2008 a unique character, especially at the front where the all-LED lighting features claw and fang-like daytime running lights, while sharp triangular "scalps" feature on the bodywork above the wheels and form a single line across the doors. At the rear, a black plastic strip joins the LED light clusters to emphasise the car's width, while a black roof is standard on top 'GT' and 'GT Line' variants. Inside, this MK2 model 2008 sets a new standard for cabin quality, with more soft-touch surfaces than you'll find in the various rival Volkswagen Group small SUVs. The central section of the dashboard wraps around into the doors and features a carbon-fibre-like finish that's springy to the touch. You get more space inside than was offered by the first generation 2008, thanks to a 60mm longer wheelbase this time round, plus an overall length increase of 140mm. Width is up by 30mm. As a result, even with a six-foot tall driver up-front, someone of similar height could sit behind comfortably. The cargo area is 10-litres larger than before at 434-litres. And there's a false floor that can be positioned to create additional space beneath.

Previously, the 2008 wasn't the most affordable supermini-based SUV on the market - and it still isn't. Pricing sits in the £24,500 to £40,000 bracket. There's a choice of 'Active Premium+', 'Allure Premium+' and 'GT' trim. Peugeot expects the 'GT' variant to be particularly popular; this comes with 18-inch diamond-cut alloy wheels, LED headlamps, a black tailgate spoiler, a contrasting black roof, a dark chrome radiator grille and a sporty body kit with a matte chrome chin spoiler and a faux diffuser. Inside, the 2008 GT gets a digital instrument binnacle 10-inch touchscreen infotainment system with TomTom navigation. Plus there's half-leather upholstery with lime green stitching, heated front seats, a leather-covered sports steering wheel, aluminium pedals, automatic air conditioning and an eight-colour ambient lighting system. Buyers also get a 180-degree reversing camera, a wireless smartphone charger, a voice recognition system, four USB sockets and 'Apple CarPlay'/'Android Auto' smartphone-mirroring. As you'd expect, a wide range of driver assistance and safety technologies are available this time round. Go for the auto gearbox (or an e-2008 model) and the adaptive cruise control system you can have has the ability to make the car automatically stop and go in heavy traffic. You can have this system with a manual gearbox too, where it operates down to 18mph. Lane departure warning, auto parking and blind spot monitoring systems are available too. Go for a variant with the largest 10-inch centre dash infotainment display and you'll get built-in navigation, plus 'Apple CarPlay'/'Android Auto' smartphone-mirroring.

The engines that have been announced for this 2008 are some of the most economical units that Peugeot make, so running one of these vehicles shouldn't break the bank. Expect the 1.2-litre PureTech petrol variants that most will buy to be very acceptably clean and frugal. With the 100hp manual model, you can expect to manage up to 52.6mpg on the combined cycle and return a CO2 reading of up to 121g/km, which is pretty good going for a car in this segment. The 1.5-litre BlueHDi diesel version of course does much better. Up to 57.1mpg on the combined cycle should be theoretically possible, along with up to 113g/km of CO2. But of course if you're really interested in ecological efficiency, there'll be just one variant of this car that'll interest you, the all-electric e-2008. For this derivative, Peugeot claims a WLTP-rated driving range between charges of 214 miles. And fast charging at the rate of 100kW is available via a CCS socket hidden behind the fuel cap, with an 0-80% charge achievable in around 30 minutes. If you install a wallbox at home, you can recharge the battery from empty in around five hours if you have an 11kW electricity supply - or in around eight hours with a 7.4kW supply. Bear in mind that the e-2008 is around 350kgs heavier than the ordinary version.

This second generation 2008 certainly makes a more overt style statement than before, but it's kept the sensible attributes that endeared its predecessor to plenty of buyers. As with most models of this kind, on paper, the advantages being offered over a standard supermini in space, styling and potential driving flexibility appear at first glance to be small. In practice though, they add up to a car that feels a far more rounded, more complete family tool - not as a primary runabout perhaps, but a perfect second family vehicle. Of course, there are things Peugeot could still improve. Not everyone likes the unusual 'i-Cockpit' steering wheel and instrument set-up for instance. We think though, that this car needs design innovations of this sort. Models of this kind ought to be fashionable, innovative and just a little controversial. If that's what you want in this segment, then you probably need to try this car. 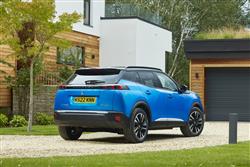 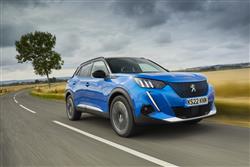 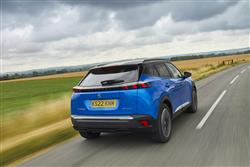 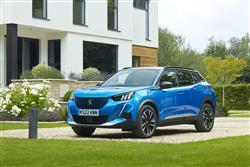 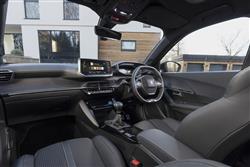 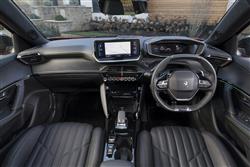