Peugeot's 2008 small SUV sold well for the brand following an initial launch in 2012, but by the middle of the 21st century's second decade, the competition had become a lot stronger. Hence the need for the heavily revised version of this first generation design that appeared in 2015. Like the original version of this Crossover, this improved 2008 offered all the advantages of a compact runabout, together with the kind of added space, style and light off road driveability potential buyers probably never expected to be able to enjoy on a small car budget. The smarter looks of this revised version aimed to draw attention to a very efficient range of engines, plus there was extra media connectivity and stronger standards of safety. Does it all make sense as a used car buy? Let's find out.

Peugeot's approach to the small SUV category was certainly initially very effective in terms of overall sales - at least to start with - with over half a million Peugeot 2008 models sold in this model's first three years of production, following an original launch in 2012. Though based heavily on the French brand's 208 supermini, this little Crossover built on the virtues of that model by offering extra space and flexibility, a higher-set driving position, more individual looks and the option of mild off road ability. All for not much more money than was being asked for its showroom stablemate. You can see why it proved to be popular. By 2015, it was clear that early class leaders like this one were going to have to work a lot harder to sustain their share in this growing segment. Hence the need for this facelifted first generation version, a car with smarter styling, stronger standards of safety and extra media connectivity. And an evolved engine range. It's this facelifted model we check out here, a car which sold until the launch of the new 2008 in early 2020.

If you're one of those people who like the idea of a small Crossover-class car but think more ostentatiously-styled contenders in this class like Nissan's Juke and Ford's EcoSport look rather silly, then the subtly fashionable shape of this Peugeot 2008 will suit you perfectly. The changes made to this improved model mostly centred on the front end where the restyled bonnet lost its previous Peugeot lion badge. That was moved to the centre of a smarter, more distinctive grille that brought the look of this model into line with that of the brand's second generation 3008. And inside? Well, the feeling you get at the wheel of this car has always been one of the things most likely to sell it to you. Peugeot hardly changed things at all as part of the updates made to this revised model. We particularly like the styled 'metal-look' gear knob and the cool blue frames around the instrument binnacle dials. Ah yes, the instrument binnacle. The style and positioning of this and the tiny steering wheel is part of the car's unusual so-called 'i-Cockpit' interior design, something that's always been a major talking point with this model. You must view the dials over the top of the steering wheel rim and initially, it can take a bit of adjustment and fiddling around until you get to the point where you can see the gauges properly, something not everyone may be able to manage completely to their satisfaction. Do that though and for most, the benefits will be well worth having: namely wrist-flick steering feel - and instruments much closer to your line of sight on the roadway ahead. Just about everything else you need to know can be found on what looks like a tablet PC attached to the fascia, the multifunction 7-inch colour touchscreen, which is fitted as standard to all but the very cheapest entry-level models. As for rear seat accommodation, well the first thing to say is that the slight advantages this Peugeot enjoys in overall length over rivals like Nissan's Juke and Ford's EcoSport really show here because this 2008 feels significantly less cramped in the back than either of those two cars. This is especially true in terms of leg room, meaning that an average-sized adult can sit behind a six-foot driver in reasonable comfort. What about the luggage area out back? Well the first thing you might notice is that, rather annoyingly, the parcel shelf doesn't lift with the tailgate - there's just a hinged edge you can pull up to see the boot area better. Take the thing out and a 422-litre boot is revealed, the space on offer being 20% more than you'd get in a Peugeot 208 supermini, which means that it's one of the larger cargo areas that you'll find in this class.

As with other small SUVs, check for child damage inside and alloy wheel scuffs outside. And of course you'll want a fully stamped up service record If the model in question is a diesel, ask how it has been used. If only for local work, the 'DPF' 'Diesel Particulate Filter' may have got clogged up, as these need frequent highway journeys in order to self-clean. Other possible problems with the DPF-equipped cars come if the DPF has been shut off part way through its self-cleaning process. That results in contamination of the oil system with fuel, which leads to the oil level rising gradually over time. What else? Well examine for flaking of paint on the bumpers and check that the air conditioning works and that the pixels on the centre display are all good. Also check for rear bumper scrapes. Finally check that the Bluetooth pairs reliably with your phone handset. Electrical glitches are relatively common, so make sure everything electrical in the car works and double-check that there are no unexplained warning lights on the dashboard. Peugeot's infotainment touchscreen software can sometimes cause the monitor to freeze or fail completely. A software reset may solve the problem, but some owners have had to replace the entire unit, which is not a cheap operation.

On the move, the higher, more commanding driving position and mildly SUV-style feel of this model have been achieved without too many obvious changes to the nippy, well balanced handling of the 208 supermini from which this car is largely derived. Under the bonnet, quite a lot's changed since this 2008 model's original launch, thanks to the introduction of PureTech petrol and BlueHDi diesel technology. All the petrol variants of this facelifted model use a 1.2-litre three cylinder unit, this powerplant developing 82bhp in base normally aspirated form or 110 or 130bhp in turbocharged guise. Most buyers though will want a diesel, the three 1.6-litre BlueHDi options offering either 75bhp, 100bhp or 120bhp. All of these variants return 76.3mpg on the combined cycle and around 97g/km. That leaves only the question of off-tarmac prowess. Yes, despite the fact that there's no 4WD option on this car, you do actually get some, provided you choose a car specified with one of the up-market trim levels that come complete with Peugeot's proven 'Grip Control' system. By braking a wildly spinning front wheel, this set-up works with the standard ESP stability control programme to transfer torque to the tyre with most traction and this, along with standard 'Mud & Snow' tyres, is enough to enable negotiation of some surprisingly sticky situations.

Some manufacturers seem to believe a small SUV should be extreme, both in its styling and in the price premium it demands over the supermini it'll be based upon. Peugeot, in contrast, think differently about a car of this kind. This 2008 may not make as overt a style statement as some of its rivals but you sense that's intentional. It's for those shopping in this segment in search of something more subtly fashionable. These customers tend also to be people who appreciate this Peugeot's other key attributes - namely asking prices and running cost efficiency figures that are difficult to beat. If that's what you want in this segment but you don't feel the need to make any sort of 'supermarket carpark statement', then you probably need to try this car. 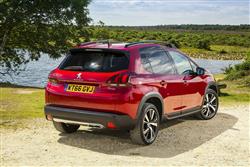 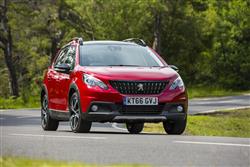 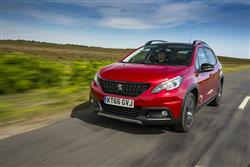 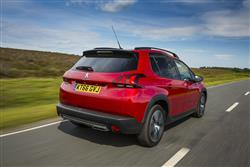 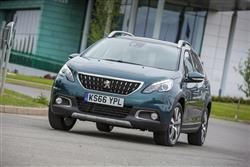 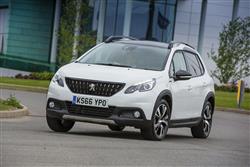