Many manufacturers find themselves utterly tied in knots when it comes to replacing or updating a hugely successful model. Often they wait for too long and wait for the car to wither or else they try an entirely radical direction that takes a couple of years for customers to appreciate. Not Peugeot. With the 207 they played a very straight bat, changing the bits people didn't like about the 206 such as the seating position, the build quality, the interior space and the steering response, and keeping the bits customers loved such as the shape and the cheeky personality. Although some have sniffily dismissed this approach as rather short termist, Peugeot are making hay while the sun shines with 207 sales sky high. Here's how to track down a decent used example.

To follow one phenomenal success story with another takes some doing, but to do it a third time gave Peugeot a huge challenge. Their 205 supermini started it all off in 1983 and things got even better fifteen years later with the 206, a car that was to sell over five million units worldwide. Then the onus fell upon the model we look at here, the 207. Despite its sales success, criticism has always persisted over the rather low rent interior finish of the 206, something Peugeot were keen to address with the more up-market 207 supermini. Of course, better quality tends to mean bigger prices and Peugeot worked hard to keep the 207 at affordable levels. Initially offered with just three and five-door hatchback body styles, a neat 207 CC coupe cabriolet followed in April 2007 and the SW station wagon model in summer of that year. The range of engines was also fleshed out, with more powerful 1.6-litre petrol units, including the 1.6-litre turbo powerplant shared with the MINI Cooper. The 1.4 VTi engine with 95bhp was also announced in summer of 2007. The 207 was facelifted in 2009 but the changes were not massive. The controversial front grille was reshaped and additional vents were installed on either side of it to visually widen the car. LED tail lights were also introduced as were Economique models with modifications to improve efficiency. The HDi 110 range-topping diesel engine was upgraded to 112bhp early in 2010 and a far superior six-speed manual gearbox was introduced to replace the sloppy five-speed item.

Peugeot claims the 207 set new class standards in terms of trim quality and equipment levels. The design of this car followed the corporate image seen on other models in the range like the 307 and 407 with the large 'smiling' grille and sharky front light clusters. The neat styling has shades of 206 about it, yet the car is completely different, based on the company's 'Platform 1' floor pan which it shares with the 1007. The striking and rather sporty look, which was designed in-house by Peugeot's own stylists, has ensured a strong customer following. The car is offered in both 3-door and 5-door hatchback form or as a CC folding hardtop coupe. If you need estate versatility, there is also an SW on offer. Peugeot decided to build the 207 at three sites in France, Spain and Slovakia, ensuring that they would always have sufficient capacity to meet demand. Sitting inside the 207, you can immediately sense that this car is far removed from the 206 in terms of its quality and elegance. Plus the 207, even in its most basic trim level, is head and shoulders above its predecessor in terms of refinement. The elegant centre panel houses all the usual heating, ventilating and audio switches and the binnacle behind the steering wheel features three circular dials, mirroring those usually seen on a motorcycle. The overall effect gives the impression of a very up-market product. The front seats are generously cut yet still manage to offer decent support. In the rear, as with most vehicles in this sector, the available space is rather limited to the size of the passenger and driver seated in the front. With the front seats fully extended backwards, the space in the back can be a bit restricted. Equipment levels? Well, air-conditioning is available in two specifications, dual zone manual or automatic. In addition, each vehicle is equipped with a fragrance diffuser which is discreetly incorporated into the fascia panel and dispenses one of seven selectable fragrances to keep the interior of your 207 smelling sweetly. Each fragrance was specially developed by a leading French perfume supplier. Useful features include automatic activation of the dipped beam, automatic front windscreen wipers, electric front windows with one-touch automatic reverse control and a remote control for the radio situated under the steering wheel. The 207CC doesn't deviate too much from the template set by the 206CC but the proportions are a little less stubby, the silhouette a few degrees more elegant. With 2+2 seating (although you wouldn't want to try to lever adults into the back seats), the 207CC is 4.04 metres long, adding 21cm to the length of the 206CC. Operating the roof is simplicity itself. With a similar operation as the 206 CC, the 207 CC roof differs significantly in terms of convenience thanks to its entirely automatic operation.

Although Peugeot had all manner of teething problems with the hood mechanisms on 206CC and 307CC variants, these appear to have been largely ironed out and the automatic roof of the 207CC has generated few issues. The standard cars feature some high-tech electronic functions which so far have been reliable but remain something to watch out for in years to come. The engines seem beyond reproach and the interior quality is vastly improved.

Peugeot offers a choice of six petrol and three diesel engines. The petrol models offered are a 1.4-litre 8-valve unit producing 75bhp, a 1.4-litre 16-valve unit producing 90bhp, a 1.4-litre VTi 95bhp unit, a 1.6-litre VTi giving out 120bhp, plus 150 and 175bhp 1.6-litre turbo options. The diesel offerings are all second generation common-rail high-pressure direct injection powerplants and start with a 1.4-litre HDi producing 70bhp. This is followed by a 1.6-litre HDi 16-valve delivering 90bhp and a range-topping version of the same engine with a variable geometry turbocharger producing 110bhp. All these units are a result of the joint venture between PSA Peugeot Citroen and BMW Group, the 207 being the first Peugeot model to use them. Safety has been designed into the 207 and the car earned a five star rating from the EuroNCAP tests. The 207's front end contains two impact absorption structures borrowed from the 407 that distribute impact energy more efficiently in the event of a collision. Sill reinforcements and tubular bars in the doors aid structural rigidity. Numerous airbags are installed in the 207 and the front two 'adaptive' airbags have a dual-generator function that can vary their pressures according to the severity of the impact. Side airbags and curtain airbags also feature as standard or as an option, depending on the model level. All 207s are fitted with two 3-point mountings in the rear outer seats, each of which can accommodate a child's Isofix car safety seat.

Despite not being a hugely accomplished car, the Peugeot 206 sold like hot cakes. The 207, despite looking ostensibly similar, represented a big step forward. Many buyers will still purchase on the strength of its looks and luck into what has become a very decent hatch. We'd look for the 1.6-litre petrols and diesels and be very particular about getting the right equipment and trim. 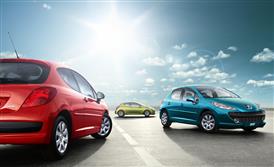 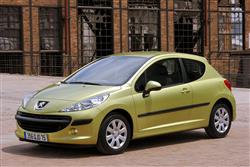 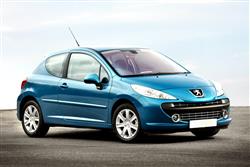 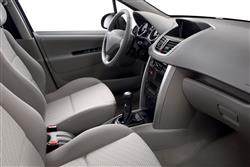