Peugeot's first attempt at the family Crossover segment, the 3008, proved to be very successful for the Gallic brand when first it was introduced in 2008. To keep this model competitive in the Qashqai class, the French maker significantly facelifted this design towards the end of 2013. That's the version we're going to look at here as a potential used buy. How does it stack up?

By now, most of us are familiar with the concept of a 'Crossover', a family car providing the best elements of an SUV, an MPV and a conventional hatchback. This one, Peugeot's first generation 3008, wasn't the first model of this kind to hit the market but it struck quite a chord with customers following its launch in 2008. Over half a million buyers chose this car in its original form, despite mainstream variants lacking the 4WD and 7-seat options that some Crossover rivals offered. Why? Well it was well priced, neatly packaged and had a quality feel. Plus, a little ironically, despite the 2WD-only drive layout, it was actually a little more use in nasty conditions than affordably-priced versions of key rivals, provided the owner specified the useful GRIP CONTROL system for extra traction reaction. All of these attributes were of course carried forward into the significantly improved first generation design launched in late-2013, the car we look at here, along with extra equipment and much smarter looks. The clever eco-minded HYbrid4 flagship variant we first saw in 2012 also continued on at the top of the range, mating a diesel engine driving the front wheels with an electric motor powering those at the rear. The improved MK1 model 3008 model range got uprated Euro6 engines in 2015, so out went the old 1.6 VTi petrol and 1.6 THP petrol units in favour of a more efficient 1.2-litre e-THP three cylinder 130bhp unit. And out went the old 1.6 and 2.0-litre HDi powerplants in favour of more efficient 1.6 and 2.0-litre BlueHDi units. In that form, the 3008 line-up continued until it as replaced by the more sophisticated second generation model early in 2017.

Many 3008 owners we found in our survey were very satisfied indeed. One said it was the best car he'd owned in fifty years of driving. Inevitably though, there were some that weren't quite so satisfied. We came across some owners who'd had a few mechanical issues with faults like difficulties with fan belt tensioners and noise from the cam chain and water pump. One said they had experienced a knocking sound from the rear/side area and another complained of a dashboard rattle and a buzzing from the glovebox area. Look out for all these things on your test drive. As for more minor issues, we came across a couple of instances where owners were finding that warning lights for things like the ESP, the brakes and the handbrake were coming on for no reason. One owner felt that the need to replenish his car with a litre of oil every 1,200 miles was excessive. And another complained that it wasn't possible to access both battery terminals without completely removing the battery. It's unlikely that the car will have been used off road in any way but look out for the usual alloy wheel parking scrapes and interior trim issues caused by unruly kids.

This car is based on the last generation version of Peugeot's ordinary 308 family hatchback, but it doesn't feel conventionally hatch-like once you seat yourself in the commanding raised driving position with its perfectly aligned wheel positioning thanks to a clever three-jointed steering column. As with all Crossovers, the idea here is to deliver everything people like about butch-looking SUVs in a more practical and affordable family hatch-shaped package. So you get the looks, without any of the compromises you'll not want to make if you never go off road. So muddy carparks can be negotiated but you'll have to leave the wilderness stuff to Bear Grylls. And under the bonnet? At the launch of this facelifted model in 2014, the range soldiered on with the engines used in the original version. At the bottom of the range, that meant a 120bhp 1.6-litre VTi unit, the only variant in the line-up offering only five gears. This engine's a willing enough unit, making 62mph from rest in 11.8s en route to 115mph. Above it sat a 1.6-litre petrol THP turbo unit with 156bhp, though hardly anyone bought it. Most customers wanted a diesel, usually the 115bhp 1.6-litre HDi variant that offered nearly double the amount of torque available from the base petrol model. This engine was also offered in a more frugal e-HDi guise buyers had to have with an EGC automatic transmission that was jerky enough to make many want to stick with the manual version. There was also a 2.0-litre HDi derivative that offered 150bhp with manual transmission or 163bhp with an automatic gearbox. At the top of the range was a hi-tech HYbrid4 diesel/electric model that mated the 1.6-litre HDi engine to a hybrid system and only came with an auto 'box. In 2015, Peugeot revised the engine range for the last year of this 3008 model's production life. The diesel variants had their HDi units replaced by cleaner, more frugal Euro6-compatible BlueHDi 120 and 150bhp engines. In the petrol range, the clever e-THP three cylinder 1.2-litre powerplant was introduced in 130bhp form to replace the previous 1.6-litre VTi and THP options. The HYbrid4 version carried on unchanged. Our favourite version is probably the 2.0-litre diesel with 150bhp. It'll take you from rest to 62mph in under 10 seconds en route to over 120mph, so it's certainly quick enough. Plus this was the only variant in the range to feature Peugeot's 'Dynamic Roll Control' system, a clever set-up that pressurises the damper of whichever rear wheel is on the outside of any given bend - so keeping the car level. And to a great extent it works too, yes reducing body roll but also giving this car a surprising feeling of agility, with impressive front end bite through the bends that's also aided by plentiful grip and precise steering feel. Peugeot really should have offered this system on other models in the range - or at least made it optional on other variants. As for the offroad promise of those macho looks, well, it isn't completely without foundation. Peugeot thinks that buyers in search of the kind of soft-road ability offered by all-wheel drive Nissan Qashqais or fashion-conscious SUVs like Toyota's RAV4 or Honda's CR-V don't need the weight and complexity of 4-wheel drive. So instead, the French brand offered original 3008 buyers the option of a 'GRIP CONTROL' system as part of a package that came with special mud and snow tyres. This copied Land Rover's Terrain Response set-up in offering the driver the chance to choose different settings to suit different surfaces. In this case, there were five different options, including snow, mud or sand. Having the set-up doesn't make this car into any kind of real off roader - there's no significant ground clearance for a start - but it's all most buyers will ever need. To finish this section, we probably need to say a few words about the rare HYbrid4 6-speed automatic variant. As previously mentioned, this mates the conventional 2.0-litre automatic model's 163bhp HDi diesel engine driving the front wheels with a 37bhp AC electric motor powering those at the rear, making this, in theory at least, the only 3008 variant that can actually claim to be a four wheel drive machine. Or at least it will be in its 'Sport', '4WD' and 'Auto' driving modes that respectively set the car up either for driving dynamically or for grip in poor conditions. The fourth selectable setting - 'ZEV' (or 'Zero Emissions Vehicle') - allows a 3008 HYbrid4 to proceed in electric mode-only in 2WD for up to two and a half miles, provided you don't exceed 31mph. Does it all work? To a point. The extra 200kgs of weight brought about by the hybrid system's extra batteries hurts the ride quite a bit, despite more sophisticated multi-link suspension. On the plus side, the car is, as you might expect, very quiet under electrical propulsion - and of course very cheap to run if you can afford the higher up-front asking price.

Peugeot's 3008 remained a very competitive option in the close-fought family Crossover segment thanks to the changes made in late 2013 that created this improved version. Unlike smaller, more fashion-conscious Crossovers, it's big enough for a family, yet easy to manoeuvre and relatively affordable to buy. Of course, these features aren't unique - but here's four that are in this sector from the 2013 to 2016 era: the up-market cabin, the neat split rear tailgate, the availability of diesel/electric power and, perhaps most significantly, the GRIP CONTROL system that buyers from new could have an option. Elsewhere in this class, all but the most expensive 4WD-equipped Crossovers will flounder around as badly as everyone else when the weather turns nasty. Find a version of this car that was fitted out with GRIP CONTROL and your 3008 won't, offering real substance behind those SUV-inspired looks. Ah yes, those looks. Awkward styling was perhaps the one thing that held back the original version of this model from even greater sales success, an issue that would have aroused far less comment had the car looked like it did in this facelifted form from the start. Smarter, sleeker and more up-market, the revised shape put this car back into contention with more modern rivals in this increasingly image-conscious segment. True, some other Crossovers can offer lower running costs and a bit of extra hi-tech, but many will still be happy with Peugeot's efforts in this regard. French sense? You're looking at it right here. 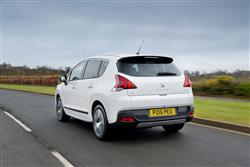 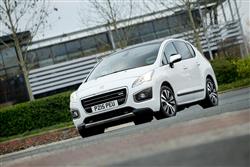 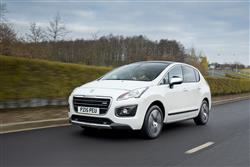