Peugeot's second generation 308 family hatch got an additional polish in this mildly facelifted guise, launched in 2017 with smarter packaging, extra engineering options and a bit more useful technology. The result was a more desirable product than you might expect from this familiar Gallic brand. You might be surprised at how much you'd like it. Let's check this car out as a used buy.

What do you look for in a conventional, affordable family hatchback from the 2017 to 2020 period? If it's driving excitement, you'll find it in a Ford Focus. If it's sheer value, then you're more likely to be drawn towards cars like Hyundai's i30 or Kia's cee'd. But what if your priorities are a bit more relaxed? You want an expensive feel. An absorbent ride. A laid back demeanour. And a car that makes you feel you're in something much nicer. Perhaps, just perhaps, you want one of these, the improved post-2017 version of Peugeot's second generation 308. The brand has sold in this sector for longer than almost any other. Mid-sized compact Peugeots with a '3' designation actually go all the way back to the 301 of 1932, progressing through the pre-war 302 and the post-war 304 to the 305 and 306 models of the Eighties and Nineties. By then, the French brand had become less aspirational in the family hatchback segment as volume sales were chased with the forgettable 307 of 2001, the underpinnings of which also formed the basis for its less popular successor, the first generation 308 of 2007. By 2014 though, this segment was changing, primarily with the continuing emergence of cheap Chinese and Korean rivals. Brands like Peugeot were forced to respond by moving their cars a little more up-market, a small but significant premium shift that this French maker's volume family hatch models had to showcase to potential buyers who'd ideally have liked a compact car from one of the smarter makers, but couldn't quite stretch to one. Hence the creation of a completely new 308 model in 2014. With this design, the badge remained the same but very little else did, with a smarter, classier body bonded to all-new hi-tech 'EMP2' ('Efficient Modular Platform 2') underpinnings. We were promised that the engineware would also be much more sophisticated but in actual fact, it took several years before all of the available new generation BlueHDi diesel and PureTech petrol units could be introduced. In the Summer of 2017, to highlight the completion of that programme and bring the safety and media connectivity systems on this car up to date, Peugeot launched the facelifted second generation 308 model we're going to look at here. This improved design was sorely needed by the brand's dealer network at a time when every one of its key rivals had been either re-launched or considerably revised. The big news here was the introduction of what was probably the most important engine that Peugeot had launched for years, an all-new 1.5-litre BlueHDi 130 unit that aimed to change the way customers thought about diesels. On top of that, there was a new 8-speed auto gearbox for the sales people to talk about and a range of small but significant styling changes to make this facelifted model stand out in the showroom. It sold until 2020 when the car was lightly facelifted which then took this second generation 308 model through to the end of its production life in mid-2021. It's the 2017 to 2021 versions of this model we look at here.

Whether you choose the five-door hatch or the alternative SW estate which rides on a lengthier wheelbase, you'll be getting yourself a family hatch-class car that's a little shorter and narrower than the class norm - and a touch lower too. But also one that's lighter and more space-efficient than most of its competitors, thanks to a modular EMP2 platform so sophisticated that it required no fewer than 116 patents. Having gone to all that effort back in 2014, Peugeot's stylists weren't minded to radically change things very much when it came to this mid-term facelift, so the aesthetic changes made were relatively minor. The brand badge was moved down from the bonnet to a place of prominence in the centre of a classier chrome-framed grille you'll find flanked by headlamps with upper edges made up of twinkling LEDs. Take a place in one of the very comfortable seats up front in what Peugeot rather pretentiously calls the 'i-Cockpit' and four things are immediately apparent: quality, lack of button clutter, the big centre-dash LCD infotainment screen and, most notably, the tiny steering wheel above which (rather than through which) you're supposed to view the instruments with their finely sculpted red needles. Jump into this model after familiarisation with an Astra or a Focus and you'll wonder where all the buttons have gone. There's a small central cluster of them in front of the gearstick for locking, heated rear window and hazard lights - and that's about it. Otherwise, almost everything's been relocated to the 9.7-inch colour LCD touchscreen that's standard on all but baseline models and dominates the centre of the dash. There's reasonable space for two adults at the back but if they're at all lanky, they may need those up-front to move forward if anything approaching long distance travelling comfort is to be attained. Moving from people space to package room, let's consider the boot, accessible via a low loading sill and a wide opening. How can the smallest car in its segment offer the largest trunk? Answers on a postcard please. In total, there's 470-litres of boot space on offer at the back, provided you include the useful 35-litre underfloor section in that calculation. If you do need more, then you'll need to consider the 308 SW estate model.

Generally, most owners of MK2 model 308s we came across were pretty happy but inevitably, there were a few issues we came across. Some owners complained of warning lights flashing on (for the particulate filter and engine management) which will require an ECU update and a forced regeneration. Peugeot recommends that the car is driven for at least once a month for 30 minutes on the highway to keep the particulate filter clear. Another complained of a high pitched whistle from the driver's window. There was only one 308 product recall in this period - for cars made in November 2017 because their airbags might not deploy. Otherwise, it's just the usual things; check the interior for child scrapes - and the wheels and rear bumpers for parking scratches. And insist on a fully stamped-up service history.

On the move in this 308, your first impressions feel positive as you settle in behind the small low-set steering wheel that by 2017 was an established brand trademark and peer above it at the slick-looking dial pack. Not everyone is in favour of this so-called 'iCockpit' layout, but we like the way it imparts a more direct, connected feel into the on-the-road experience. With this facelifted model, the brand didn't make any dynamic changes to this car's ride and handling, but that remained impressive with a well-judged blend of responsive suppleness. Instead, the development budget was focused on the creation of a fresh 1.5-litre BlueHDi diesel engine, more refined and responsive than the previous 1.6-litre unit and launched with 130bhp on tap. The alternative engine option for mainstream 308 buyers was the one most original customers chose, the 1.2-litre PureTech petrol unit. This powerplant may only offer three cylinders but it punches well above its weight, whether you choose it in 110bhp 5-speed manual form or in 130bhp guise, where it got either a re-designed 6-speed manual gearbox or the option of 'EAT6' 6-speed auto transmission. The PureTech unit's efficiency is impressive, with the base 110bhp derivative capable of up to 70.6mpg on the combined cycle and 95g/km of CO2 (both NEDC figures). Sportier 308 models get some pokier engine options; either a 2.0-litre BlueHDi diesel with either 150 or 180bhp. Or a 1.6-litre THP petrol turbo, offered with either 205bhp in the 'GT' or 270bhp in the top hot hatch 'GTi'.

Peugeot wasn't just building a car with this 308. It was building a reputation. For too long, this much-loved brand lost sight of what made people want its products. By 2017 though, it was setting out to build desirable machines once more, models that weren't simply playing catch up or trying to copy the big sellers. Sure enough, this is vehicle with a definite feel of its own. It's not going to appeal to everybody but it is a car that the company felt rightly proud of - a contender good enough to worry the best in the business. Overall, what's on offer here is a car that continued to restore Peugeot's reputation for building elegant, comfortable and understated vehicles. A car that gave the brand a shot at making good on its upmarket aspirations. 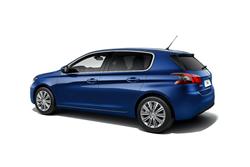 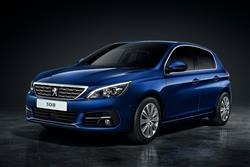 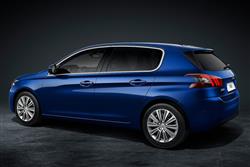 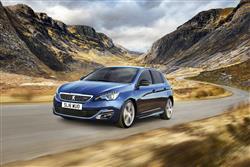 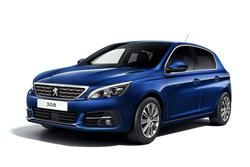 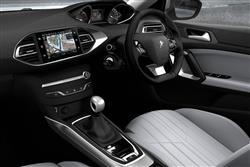