It took Peugeot a long time to get round to designing its own purpose-made People Carrier but when at last we saw the brand's 5008 seven-seater in 2010, it proved to be an impressive first effort. An improved version with smarter looks, cabin upgrades and extra equipment was launched late in 2013 and that's the car we're looking at here as a potential used buy. In this usefully revised form, this MK1 model Peugeot 5008's attributes remain appealing - cosseting ride and refinement plus more total luggage space than any other affordably-priced family MPV can offer.

If your family needs a People Carrier with seven seats, you've to choose between something quite compact and something quite large. Like us, you might very well conclude that neither of those solutions is exactly ideal. In which case, it might very well be worth you trying one of these - Peugeot's 5008. We're looking here at the improved version Peugeot launched late in 2013, three years after this car's original launch as the company's very first home-grown MPV. For years, the brand had relied on its PSA Group stablemate Citroen to cover off the People Carrying market, but that maker's Picasso line-up proved a little extreme for some more conservative family folk. With the 5008, Peugeot hoped to mop up some of these sales, amongst people perhaps who otherwise would have opted for sensibly-minded rivals like Volkswagen's Touran or Toyota's Verso. It was a car that cost the same kind of money as these alternatives but offered significantly more space: it was a strong proposition. From a brand with more of a People Carrying heritage than you might think. Though Renault usually gets the credit for pioneering modern era MPVs with its Espace and Scenic models of the Eighties and Nineties, perhaps they shouldn't. After all, twenty years before that, Peugeot were selling thousands of their 504 and 505 Familiale estates with three rows of seats to larger families. No one called these cars 'compact MPVs' or recognised them as ground-breaking but looking back, they performed pretty much exactly the same role an affordable seven-seater People Carrier like this MK1 model Peugeot 5008 did in its era. This MPV sold until 2017, when it was replaced by a MK2 model 5008 that was re-launched as a luxury SUV.

We came across plenty of satisfied 5008 owners but inevitably there were a few that had issues - things you'll need to look out for on the used market. A number of buyers reported various assorted small electrical failures, so check that everything works as it should. One owner mentioned an issue with badly fitting trim around the driver's door. More significant issues experienced include an engine oil pressure issue, cylinder injector problems, fuel waxing issues and a gear sensor failure. One owner experienced a clutch assembly break-up that affected the flywheel and the clutch. We also came across reports of electronic handbrake failures and brake juddering. Look out for these issues too. There have been nine recalls on the 5008. The issues covered range from windscreen trim detaching on early cars, to water leaking into the rear doors, fuel and oil leaks and incorrectly tightened bolts on the brake callipers mounting points. Check the online recall database on the DVSA website to see if the model you're looking at has been affected by a recall, and if so whether the remedial work has been carried out.

The 5008 was always one of the better handling compact 7-seat MPVs, giving some credence to the strapline Peugeot's marketeers used when they launched it - 'enjoyed by families, loved by drivers'. So, for example, in contrast to the dull, rather lifeless steering that many People Carriers offer, you get a helm that actually enables you to properly feel what's happening beneath the wheels - and there's plenty of grip, if not quite the level of feedback that you'd get from something like a Ford S-MAX. But don't get too carried away. This Peugeot's real forte is in effortlessly soaking up the miles on longer trips, journeys where qualities like the supple ride and excellent refinement come to the fore. It's also worth remembering that, measuring in at nearly 2m in width, the 5008 is a large vehicle and can feel like it, especially in urban traffic. Its short overhangs do help when manoeuvring though, as does the high driving position. Having said all that, as we suggested at the beginning, this car is a more engaging driving companion than you might expect a seven MPV to be. Certainly, should you find yourself running late for the school play or needing to head home especially quickly to save that casserole you forgot to take out of the oven, this People Carrier will play along thanks to the well controlled bodyroll that's a by-product of the rather firm ride. Peugeot actually developed a system that took this a stage further - 'Dynamic Roll Control' - but unfortunately, this was fitted only to the top 150bhp 2.0 HDi diesel variant. It's a clever system that pressurises the damper of whichever rear wheel is on the outside of any given bend - so keeping the car level. And to a great extent it works too, yes further reducing body roll but also giving this car a surprising feeling of agility, with impressive front end bite through the bends that's also aided by plentiful grip and precise steering feel. When this facelifted 5008 was introduced in late 2013, its engine range was very little different to that Peugeot offered when the car was originally launched back in 2010. That meant a line-up based primarily on 1.6-litre VTi petrol and 1.6 HDi diesel units, with a 156bhp 1.6 THP petrol option and a 2.0-litre HDi diesel powerplant at the top of the range. In 2015 though, changes were made, with the introduction of more efficient BlueHDi technology for the diesel engines and a new-generation three cylinder 1.2-litre e-THP petrol unit. Petrol power though, will be less than ideal if you're thinking of doing a bit of towing. For this, a better choice would be something from the diesel line-up, which starts with a 115bhp 1.6-litre HDi variant offering nearly double the amount of torque available from the base petrol model. This engine is also offered in a more frugal e-HDi guise you have to have with an EGC automatic transmission that's jerky enough to make us want to stick with the manual model, despite the manual stick shift's rather long throw. That leaves only the top 2.0-litre HDi model we mentioned earlier. In 150bhp manual guise, it'll take you from rest to 62mph in 10.0s en route to 118mph - that's a fraction faster than the 163bhp 6-speed automatic version can manage.

There's an honesty and integrity about this 5008 that should appeal to MPV buyers in the mid-sized 7-seat segment. It isn't trying to be some sort of lifestyle People Carrier promoted by impossibly fashionable folk with bronzed skin, a kitesurfing kit and no visible means of income. No, this one's a car for the real world, for messy kids, dogs with muddy paws and family emergencies. From, a brand that makes surprisingly little of the fact that in terms of total luggage capacity, this is one remarkable vehicle. To put that into perspective, here's a car that measures in at only just over 4.5m - little more than a compact Ford Focus family hatch. Yet it offers more total seats-down luggage space than an enormous Ford Galaxy. That's quite a feat of design - and it's one worth remembering if you're likely to be tempted away by trendier, more fashionable and maybe even more efficient choices in this sector. Yes, it's true that the extra space doesn't make this Peugeot any better than its compact MPV rivals in terms of third row passenger space - you really will need to pay the extra for something Galaxy-sized for that. But if your use for the 6th and 7th seats is only for kids and is only occasional, a 5008 could still be all the MPV car your family ever needs. 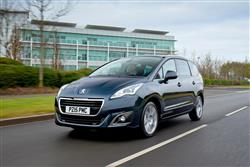 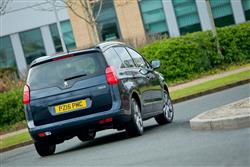 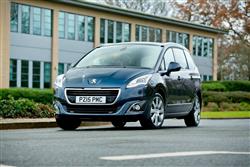 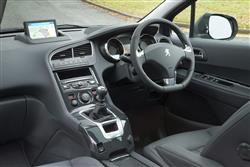