Peugeot's small van-based MPV gets a new name and a new look. Jonathan Crouch checks out the Rifter.

Has Peugeot's van-based Rifter compact people carrier sold out and gone a bit posh and less LCV-like? Don't worry. Behind that sleeker looking front end and all that talk of flashy multimedia systems, glass roofs and radar-based city braking functions, you can still buy a basic one that's as useful as the old Partner Tepee model used to be. It's just that you're getting a bit more sophistication this time round. There's even a full-electric version.

Go back a few years and van-based passenger vehicles were, and there's no real way to gild this one, a bit rough. You bought one because you needed stacks of space and you didn't have a lot of money. Or alternatively, because your kids would destroy anything that wasn't built in the back like a police detention vehicle. These days, things have changed. Not only have commercial vehicles become a lot slicker, but there's been a gradual merging between conventional MPVs and van-based people carriers. There's no longer a yawning gulf in look and feel. Well, that's the case for most manufacturers anyway. For Peugeot, that's a trickier gap to bridge, largely because the interior build quality of their passenger cars has raced ahead massively within the last five years. In order to try to keep up, the brand has replaced its previous van-based MPV, the Partner Tepee, with this smarter, slicker Rifter model.

So what's on offer beneath the bonnet? Well, the petrol options open with a 110PS 1.2-litre PureTech three cylinder unit (though only with the 'Long' body shape). Many Rifter folk choose this unit with 130hp, which can be had with both body styles but only comes with an EAT8 auto gearbox. If you're after frugality, there are two alternatives. The first is a traditional diesel, Peugeot's usual 1.5-litre BlueHdi unit, which comes only with a manual gearbox and is offered in 100 or 130hp forms. If you want to take a bit more of a technological step though, you'll want to consider the all-electric e-Rifter. This BEV variant features a 100kw (136hp) electric powertrain capable of up to 260Nm of torque. Connected to a 50kWh battery, the e-Rifter achieves up to 171 miles from a single charge under WLTP testing. With a top speed of 83mph, the e-Rifter can accelerate from 0-62mph in 11.2-seconds. With the conventional combustion modeols, an interesting option is what Peugeot calls 'Advanced Grip Control'. This is a system that provides enhanced traction on roads or tracks with low grip surfaces, allowing the vehicle to continue to make progress in a situation where a normal two-wheel drive vehicle would struggle. It's combined with a generous ground clearance of 15cm with Mud & Snow tyres. It adapts to the conditions encountered by acting on the front driving wheels. At any time, the driver can choose to allow the system to operate automatically in Standard mode, or can switch it into 'Snow', 'Off-road', 'Sand', or 'ESP Off' modes by using a dial on the dash centre panel.

This Rifter model, like its Citroen Berlingo design stablemate, sits on the PSA Group's EMP2 platform. As with the old Partner Tepee, there are two wide sliding side doors and they feature electric windows. There are two body styles - 'either Standard Length (with five seats) or Long Length (with seven seats). At the wheel, this model uses the innovative 'Peugeot i-Cockpit' design familiar from the brand's other models. Peugeot claims even more interior versatility this time round and storage solutions abound under every flap and in every crevice with more ingenious inclusions as you ascend the range. There are three individual seats in the rear that can be folded down with a simple movement using the 'Magic Flat' controls in the boot. Combined with a folding front passenger seat, this feature provides a perfectly flat floor and a load length of up to 2.70m for the 'Standard Length' version and 3.05m for the lengthier 'Long Length' model. A huge tailgate makes loading easy and there's a class-leading boot volume, increased by 100-litres to 775-litres for the 'Standard Length' model. The boot is easily accessible thanks to the opening rear window in the tailgate and two different height positions for the luggage cover. Around the cabin, there are 28 large and ingenious storage spaces such as the new-generation Modutop multi-function roof that also lets more light into the interior. The 'Top Box' glove box is unique to the segment thanks to the 'Airbag in Roof' system.

Prices for combustion models sit in the £24,000 to £29,000 bracket and there's a choice between the 'Standard' (5-seat) bodyshape or the lengthened 'Long' (7-seat) model, the latter commanding a premium of around £1,600. There are three trim levels for the combustion models - 'Allure', 'Allure Premium' and 'GT'. The line-up's overall asking figures mean that this van-based compact MPV could easily undercut Peugeot's more car-like 5008 7-seat MPV model by £3,000 to £4,000, depending on the variant being considered. You'll need a budget of just over £30,000 for the all-electric e-Rifter, which is available with both body styles but only with 'Allure Premium' or 'GT' trim. In the combustion range, base 'Allure' trim includes as standard Lane Keeping Assist, Speed limit recognition and recommendation and Active Safety Brake. Plus air conditioning, electric and heated door mirrors, Bluetooth, a DAB radio and aluminium roof bars. You also get electric rear windows, rear parking sensors, an electric parking brake, tray tables at the back of the front seats, an 8-inch capacitive colour touchscreen with smartphone-mirroring and voice recognition, LED daytime running lights and 16-inch 'Taranaki' Alloy Wheels. Range-topping 'GT' trim gives you Connected 3D Navigation, keyless entry, automatic dual zone climate control, power folding mirrors, a panoramic glass roof and 17-inch 'Aoraki' alloy wheels. 'Bianca White' is the standard colour for all trims, with 'Onyx Black' and 'Ardent Red' available as options. Metallic paint in five colours ('Cumulus Grey', 'Nimbus Grey', 'Pearl Sand', 'Deep Blue' and 'Sunset Copper') can also be specified on all variants.

Peugeot has worked hard to drive down WLTP tailpipe emissions and deliver strong economy with the Rifter and to good effect. The 110hp 1.2-litre PureTech petrol variant manages 45.8mpg on the combined cycle and 153g/km of CO2. Of course, you'll have to do your bit as a driver in order to get anywhere near the published fuel figures. To help you, the centre dash infotainment screen's 'Trip Computer' section gives you read-outs for current fuel consumption and remaining range. Drive either of the diesel models with a modicum of restraint and you'll be able to get better than 50mpg from them. The official figures for the BlueHDi 100 variant are up to 57.4mpg on the combined cycle and up to 137g/km of CO2. The e-Rifter comes standard with a 7.4kW single-phase charger and with an optional 11kW three-phase charger. Supporting a variety of charging methods, the e-Rifter can be charged using wallbox or 100kW rapid charging. A full charge from a 7.4kW Wallbox will take 7.5 hours, or five hours using the optional 11kW three-phase charger. Supporting rapid charging, 0 to 80% charge can be completed in just 30 minutes using a 100kWh rapid charger. The e-Rifter also comes with three driving modes and two regenerative braking modes to optimise battery range and vehicle performance. Drivers have access to three driving modes: 'Eco', 'Normal' and 'Power'. There are also two regenerative braking modes, 'Moderate' and 'Increased'. Enough on powertrain efficiency. What about other financial considerations? Well, regular service intervals come round every 16,000 miles or 12 months, depending on which comes sooner. If you engage in what Peugeot calls 'Arduous' conditions of use, then you'll need a servicing visit every 10,000 miles or every year. The bottom line is that most owners will need to budget around an annual dealership appointment; there are plenty of Peugeot outlets to choose from, so you should never be too far from one. So you can budget ahead, the French maker offers a maintenance scheme that lets you pay either a one-off fee or monthly instalments to cover the cost of the routine upkeep of your car for as long as three years and 35,000 miles.

Commercial-based MPVs have genuinely come of age. The Peugeot Rifter, and indeed its sister vehicle the Citroen Berlingo, is proof positive of that. But as these vehicles have become more sophisticated, the prices have quietly crept up. Also, the way we perceive and use such cars is subtly different. This Rifter can be had with a slick multimedia system and a ritzy glass roof. It's no longer the sort of thing you'd chuck a couple of muddy mountain bikes into the back of without worrying about the upholstery. So has the Peugeot lost its way in that regard? Not really. The Rifter's available in a range of trim levels, with the French company looking to cater at the foot of the range to those who want something no-nonsense, while at the same time offering up-spec models to those who want car-like features but more space in the back. The bottom line is that this is still one of the most versatile vehicles that sensible money will buy. 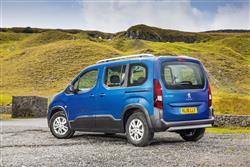 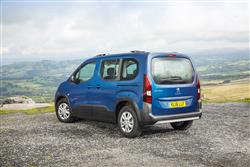 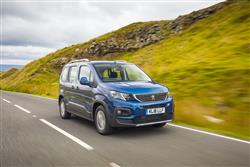 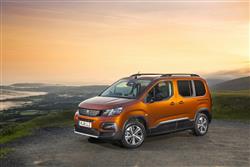 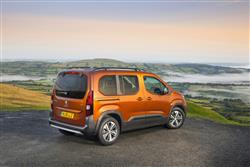 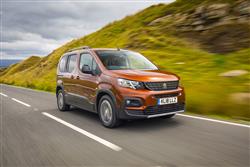