Between 2010 and 2012, Renaultsport monopolised the podium when it came to hot hatches, with a triple-pronged assault that opened with the Twingo, continued with the Clio and reached its apex with their magnificent version of the Megane Coupe. Here was a car with no close rival. Yes, there were hatchbacks that offered more performance, but none blended power and control with quite the same delightful tactility and effectiveness as the Megane Coupe Renaultsport. Here we take a look at the Megane 250, a car that offers strong used value coupled with the ability to embarrass supercars when the going gets twisty.

The Megane 250, as we'll abbreviate it henceforth, had some very big boots to fill. Its predecessor, the Megane Renaultsport R26, was a 230bhp hooligan as home on a race track as on the road. This spawned an even more focused model in 2008, the R26.R, which made just about every other hot hatch instantly seem about as composed and fleet-footed as a Jon Sergeant and Anne Widdecombe paso doble. The thing was, the styling of this generation Megane never found universal acclaim. In fact, many found it plain ugly. Making a prettier Megane was never going to be difficult. Building a Renaultsport model that built on the R26 was a heck of an assignment and when the Megane 250 first appeared, it looked as if it had succumbed to a bit of middle age spread. Yes, the fit and finish of the cabin was noticeably better, but had the power output climbed enough to take account of the additional bulk that went with the extra quality? It seems we needn't have worried. The Megane 250 was even quicker and more capable than its predecessor. Yes, a little of the rawness that made the old R26 so breathtaking had been lost, but most customers who were looking to run their car for 365 days a year would willingly take that trade. The car was sold in both standard form and in a more focused 'Cup' version right through to 2012 when it was replaced by the Megane 265.

The third generation Renault Megane range is split into hatch and coupe body styles. The five-door hatch models cater to the practicality needs of customers, leaving the three-door coupe free to adopt a sportier approach. Predictably, the Megane Renaultsport 250 is based on the coupe body, inheriting its curving roofline and purposeful stance. The Megane 250 then builds on these basics with its lowered suspension, side sills and accentuated wheel arches stuffed with 18" alloys. The nose has a ground hugging bumper with a suitably vast air-intake but it's probably the rear that shows this Megane in its most dramatic light. Here the curving lines of the side windows and rear screen merge together and a massive central exhaust pipe emerges from the diffuser cut into the bumper. The effect is definitely more coupe than hot hatchback. Interior design and build are increasingly being recognised as Renault strong points and once again, the Megane 250 builds upon the solid foundations of the standard models. Sports seats and an optimally shaped Renaultsport steering wheel complete with thumb grips provide the main connections between car and driver. There are also aluminium pedals and a rev-counter with a gearshift indicator to prompt when the next gear is needed. The headrests, dashboard and rev-counter all carry the Renaultsport logo, just in case you forget.

The Megane 250 is designed to be flogged mercilessly around a circuit and it's built extremely tough as a result. The old R26 models were favourites of track car hire companies exactly because of this rugged durability and although the 250 is a more sophisticated thing, it's still proving popular with buyers who like to dole out some punishment to their vehicles. Check for accident damage, tyres that are on their last legs and also be careful of cars that have been remapped to within a nadge of going pop. Most Megane 250 models will, when tested on a dyno, often develop a good deal more than the quoted 247bhp (250PS), so tuning them still further can quickly take you to a land of holed pistons.

As with the previous generation Renaultsport Megane models, the Megane 250 is powered by a 2.0-litre turbocharged engine. This heavily revised unit increases power and torque significantly however, generating 250bhp at 5,500rpm and 340Nm at 3,000rpm. The twin-scroll turbocharger is designed to give fast responses, making the engine's concussive punch available through a broad spread of the rev range. Eighty per cent of the maximum torque is on tap from 1,900rpm and there's little let up in the acceleration until you home in on the rev limiter and reach for the next gear. It'll demolish the sprint to 60mph in 5.9s and easily top 150mph. Renaultsport's offspring boasts a raft of specific equipment designed to heighten driving enjoyment, including Renaultsport Dynamic Management (which permits three ESP modes) and the Renaultsport Monitor (onboard telemetry). The chassis of the Megane 250 is carried over from the Renaultsport versions of the old Megane - which is no bad thing. The set-up incorporates Renault's clever independent steering axis which has proved very successful in reducing the torque steer that afflicts many hot hatchbacks. Torque steer is manifested in a tugging on the steering wheel under hard acceleration as the front wheels battle to deploy the engine's power and point the car in the desired direction at the same time. The steering system is based on that found in all the third generation Meganes with its focus on offering greater precision and feedback. Keener drivers will turn to the Cup version, largely for its brilliant GKN limited slip differential. At the back there's a torsion beam rear suspension system that's simple, tough and ultra effective. Big Brembo four-pot brakes take care of stopping duties.

The Renaultsport Megane Coupe 250 is a vehicle that dominated the premier league of hot hatches. It has also become the nemesis for a number of other cars in the coupe sector that try to carry a higher asking price and then get their trousers taken down by the feisty Renault when the route gets a little bit demanding. Although it might have been slightly overshadowed by the newer 265 model, for used buyers this is where the value is at, especially if you're looking for something with modest miles and which still feels very fresh. 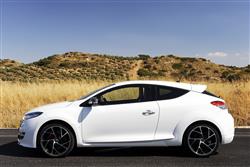 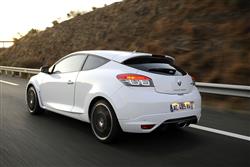 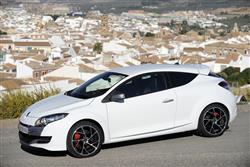 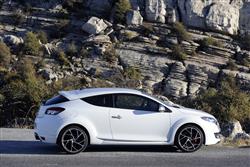 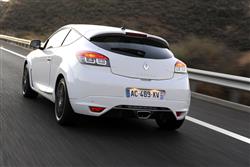 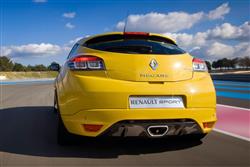