Honda is a company that possesses some of the biggest engineering brains in the world, but sometimes you have to wonder what would happen if those in their marketing departments were equally clever. The Japanese company has the ingenuity and foresight to be up there with Toyota in terms of sales, but all too often it mis-directs its manufacturing might. Take the brand's Civic family hatchback. This really ought to be the brand's flagship sales success story, a car with premium engineering that also claims to be able to mix it with volume C-segment cars like the Ford Focus and Vauxhall Astra in the sales charts. Unfortunately for Honda, the Civic has never quite managed to do this and indeed, there was a lengthy period from 2005 to 2015 when many felt the car was becoming less rather than more competitive against its key rivals. Honda tried, with limited success, to turn this situation around with the ninth generation version launched in late 2011. This particular model could though, make a lot of sense as a used buy. Let's check it out.

The ninth generation Civic we first saw in 2011 never had the instant visual appeal that marked out its predecessor. It took an evolutionary approach to development, toning down the styling of the squat eight-generation model while retaining a lot of that earlier design's appeal. When the range launched, buyers got a choice of 1.4 and 1.8 i-VTEC petrol engines and the venerable 2.2 i-DTEC diesel, with trim levels starting with the SE and stepping up through ES, EX and EX GT grades. One version notable by its absence was a racy Type R variant. The 2.2-litre diesel was pensioned off in 2013, replaced by a brilliant 1.6 i-DTEC diesel that developed 120PS and returned 62.8mpg. At the start of 2014, the Civic Tourer estate version appeared, with a choice of 1.6 i-DTEC diesel or 1.8 i-VTEC petrol engines and S, SE Plus, SR, and EX Plus trims. Honda launched a Black special edition in July 2014, available with either the 1.6 i-DTEC diesel or 1.8 i-VTEC petrol engines, this variant combining a number of gloss black elements to give a bold look with attitude. The MK9 Civic model was updated by a facelifted version in the spring of 2015.

At first it's tempting to pass this MK9 model Civic off as a facelift of the old car, but spend a little more time with it and you can see just how much work has gone into developing something fresh. The designers wanted to keep the sporty and advanced elements of the old model's character but tweak them to express a more dynamic feel. The car is 20mm lower and 10mm wider than its predecessor, giving it a squatter, more purposeful stance. This 'blended body' features smarter aerodynamics, including a rear light cluster that works as an aerodynamic spoiler, managing air flow over the top and sides of the bodywork. The interior is focused around the driver and, like the eighth generation car, features a split-level instrument binnacle. One area where clear strides were made with this design was in the perceived quality of the cabin. Previously, Civics had featured quite a lot of scratchy hard plastics but this ninth generation model altered its approach to meet a far more demanding European customer base. There was typical Honda design cleverness too. Inside you get probably the best one-handed seat folding operation in the business - the brand's 'Magic Seat' system. Granted, it probably wouldn't impress David Blaine but it'll impress your neighbour. If you're looking at a 'Tourer' estate model, you'll find that the interior boot floor has been raised compared to the hatchback to create a completely flat area when the seats are folded down. The rear seat cushions can also be flipped up to reveal ample floor space for carrying tall objects. A 60:40 split in the seat base offers even more options for carrying both people and cargo and provides an alternative load area if access via the tailgate is limited. You get 624 cubic litres of boot volume with the rear seats in place and up to 1668-litres when they're folded. There is also a very handy hidden compartment perfect for storing the tonneau cover when it's not needed. Furthermore, there's additional under-floor storage in the boot which makes carrying tall objects in the boot easy, plus the height of the loading lip in the Tourer version is reduced by 137mm compared to the Civic hatchback. It's all been very well though through.

Not a lot goes wrong with the ninth-generation Civic. Buyers are, on the whole, a contented lot if customer satisfaction surveys are anything to go by. What's more, Honda has delivered on its promises. Based on real-world MPG figures submitted by thousands of drivers to the Honest John Real MPG website, the Civic 1.6 i-DTEC took the top accolade in 2014, based on an average score of 66.2mpg. When looking at a used Civic, make sure the electronics work as they should: electric windows occasionally go on the fritz. Rear brakes have been an issue, as the car can chew through brake pads in around 25,000 miles. There have also been reports of vibrating trim panels.

This ninth generation Civic model continued on with the simple yet space-efficient old-tech torsion beam set-up its predecessor had introduced. This time round though, the layout used clever fluid-filled compliance bushes to improve overall ride and handling. A lot of resource was poured into improving ride and refinement on this car, with particular emphasis placed on reducing wind noise and improving the cabin noise insulation. Using Honda's anechoic chamber in Swindon, engineers even managed to identify how the head lining reacted acoustically with the roof and optimised its noise suppression characteristics. Used Civic buyers ought to target two engines; the 120PS 1.6 i-DTEC engine diesel and the 142PS 1.8 i-VTEC petrol unit with the choice of manual or automatic transmissions. The introduction of an Adaptive Damper System (ADS) plusher versions of later pre-facelifted MK9 models helped to enhance stability and comfort under varying loads and driving conditions. With this set-up, the driver can select between Dynamic, Normal and Comfort modes to suit the roads or their mood. We'd try and stretch to a 1.6-litre CDTi diesel version. Here, the Civic has a reasonable turn of pace and delivers some 300Nm of torque, which should be more than enough to shift this Honda with some alacrity, even when loaded to the gunwales. The engine will make 60mph from standstill in a fraction over 10 seconds in hatchback form.

While it might not be the most exciting choice in the family hatch sector, a used ninth-generation Civic is a rugged and practical selection. We'd look to the excellent 1.6-litre i-DTEC diesel engine with its punchy torque and brilliant real-world economy and we're also quite taken by the sleeker Tourer estate body. Values are lagging a bit below where they really ought to be, so it's a good time to take advantage. 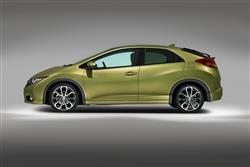 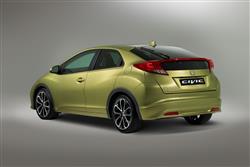 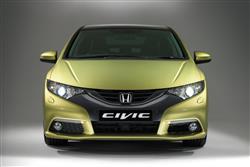 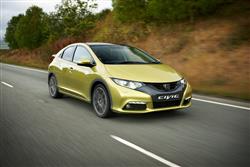 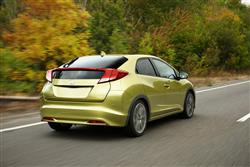 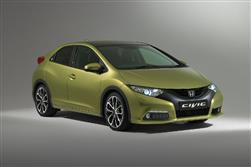