The petrol/electric plug-in MINI Countryman manages a scarcely believable 156.9mpg combined cycle fuel return and puts out as little as 40g/km CO2. Plus it's pokey and relatively affordable and can go over 31 miles on a single charge. Still want that diesel?

What on earth would Sir Alec Issigonis have made of this - a plug-in MINI? It had to come of course: brand owners BMW have for some time had plug-in technology at their fingertips and with the move up-market of models like the second generation Countryman, it was clear that customers were going to want it. This model may have a rather clumsy name but there's nothing awkward about the way it'll go about slashing your running costs. Keep the thing charged up and it'll give you up to 31.7 miles of fuel-free motoring, more than most people's daily commute. Plus, thanks to a government grant, this derivative will cost you very little more to buy than an ordinary Cooper D variant.

Here, the little 1.5-litre petrol Twin Power Turbo engine from an ordinary MINI Cooper is paired with an 88bhp motor mated to a lithium-ion battery pack, enough to generate a total system output of 224bhp. It's all controlled via a standard 6-speed Steptronic auto gearbox. As the name of this hybrid variant suggests, it comes only with 'ALL4' 4WD - with 385Nm of torque on offer, you'd want that. That's quite a lot for such a compact car, hence the rapid 6.8s 0-62mph sprint time. More relevant though, is this variant's ability to run on electric power alone for up to 31.7 miles. To help maximise efficiency, what MINI calls a 'eDrive' toggle switch is provided that lets you swap between three modes, entitled 'Auto eDrive', 'Max eDrive' and 'Save Battery'. In the first of these settings, the car will only work on electric power alone up to 50mph, but if you select 'Max eDrive', the all-electric top speed will be raised to 78mph. In the 'Save Battery' position, the electric element is disconnected so that energy can be stored for future use - say for the end of a trip that'll involve a degree of urban motoring.

You'll have to know your MINI Countryman models quite well to differentiate this one from any normal petrol or diesel derivative. Look closely and you might spot model-specific design elements such as the "E" emblem on the radiator grille and side scuttles, as well as door sill finishers with a yellow "S" logo. The 17-inch light alloy wheels are another distinguishing feature exclusive to this plug-in model. Inside, hybrid-specific displays and the eDRIVE toggle switch are the only plug-in giveaways. Many plug-in models force you to compromise on bootspace - as this one does. Instead of the 450-litre boot you'd find in any other Countryman, you get a 405-litre capacity, extendable to 1,275-litres if you push down the rear bench (down from 1,309-litres). Our favourite optional feature is the 'Picnic Bench'. Tug this piece of padded material out from below the boot floor, then drape it over the bumper and you've got yourself a neat - and surprisingly comfortable - padded seat to sit on while putting on wellies or wrestling the kids into waterproofs. The magazines have sneered at this idea, pointing out that it'd be difficult to get at if the boot were full. But how often do you travel around with a completely full boot?

Prices for this plug-in Countryman variant sit in the £32,000-£34,000 bracket and there's the choice of three trim levels - 'Classic', 'Sport' and 'Exclusive'. The list price represents a premium of around £3,000 over a conventional Cooper D ALL4 auto diesel version of this car. In justifying that, it'll help that this Countryman PHEV model comes well equipped. Standard kit includes the MINI's acclaimed Navigation system, Bluetooth, Cruise Control, an Emergency E-call set-up and the brand's 'Active Guard' package of electronic radar-dricven safety features. Plus, among other features, buyers also get 6-speed Steptronic automatic transmission, a three spoke sports steering wheel and the MINI Driving Modes system that allows you to tweak steering feel, throttle response and gearshift timings to suit the way you want to drive.

Pairing the 1.5-litre MINI Cooper engine with an 88bhp motor that runs from a lithium-ion battery pack positioned under the rear seat makes a big difference to this plug-in model's running costs. Drive this derivative with some care and the over-optimistic 'WLTP' official figures claim that you could see a combined consumption of 156.9mpg and up to 40g/km of WLTP CO2 emissions. That's based of course on using the full 31.7-mile range of the battery, which can be fully charged in as little as two hours and fifteen minutes from a dedicated charging point. To help maximise efficiency, a provided 'eDrive' toggle switch lets the driver of this electrified Countryman swap between 'Auto', 'Max' and 'Save Battery' modes. In the first of these settings, the car will only work on electric power alone up to 50mph, but if you select 'Max', the car will have an all-electric top speed of 78mph. In the 'Save' position, the system sends as much energy to the batteries as possible for future use, so you can store it until later in your trip when you might want to drive around town with zero tailpipe emissions. Insurance is group 27E.

If you're about to buy an ordinary petrol or diesel MINI Countryman with high-spec trim, then don't: until you've tried this plug-in version. It simply makes more sense as an overall proposition - and the downsides are few, providing you can afford the up-front asking price. As with all other plug-in models, the quoted fuel and CO2 figures are pie-in-the-sky - but the important thing is that the government believes them, so for business buyers, the tax breaks that come with this car will be useful. As for fuel costs, well overall, you'll probably end up paying much the same as you would to run a diesel Countryman. It's just that owning this plug-in model will make you feel so much cleverer and more eco-friendly. There's something to be said for that. 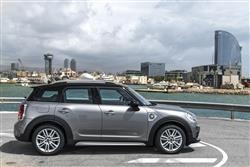 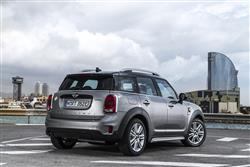 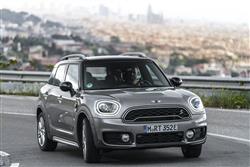 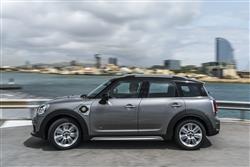 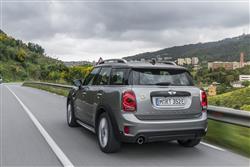 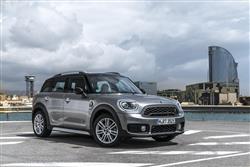