Renault's little Captur small SUV model aims to deliver a blend of the character and ruggedness of a Crossover, the space and practicality of an MPV and the dynamics and driving refinement of a family hatchback. That's asking a lot, but this Clio-based design delivers plenty, with super-economical engines, some genuinely clever interior touches and no small dose of style. This improved version of the original first generation design was launched in 2017 to allow this model line to continue to appeal to supermini buyers wanting extra versatility, as well as family hatchback customers in search of something more interesting and affordable.

If you're a volume brand these days, you simply have to offer a 'B'-segment supermini-based Crossover SUV. Here's the one that in the second half of the 21st century's second decade, they all had to beat: Renault's Captur. In response to mounting competition, it was improved in 2017 to create the facelifted model we're going to look at here. At the launch of this updated MK1 Captur, Renault were keen for us to know that the front end styling had been brought into line with that of the brand's larger Kadjar and Koleos SUVs, while inside, there were better seats, a new steering wheel and a smarter dash. There was also more electronic technology to please typical Captur customers. For older folk, things like blind spot monitoring and a self-parking set-up were offered. And for younger buyers? Well for them, there was an improved R-Link infotainment package offering 'Android Auto' smartphone-mirroring. And the option of a thumping BOSE premium sound system. All of that's important, but it wasn't especially significant. There were, after all, no mechanical changes or fundamental design alterations made as part of the 2017 update. With this facelfted model, not much needed fixing, which is why not that much was fixed. That spoke of well-founded confidence; in 2017, the Captur was, after all, Europe's best selling B-segment SUV. This model's strengths were always its stylish, personalisable looks, its spacious, flexible interior and its economical running costs, attributes that remain as attractive as ever in this improved model on the used market. This car sold until the launch of the MK2 Captur in early 2020.

This little Crossover shares much with the Nissan Juke that was launched back in 2010, the car that kick-started the SUV B segment. This Captur didn't make its debut until 2013, but was an instant hit and today regularly out-sells its Renault Nissan Alliance design stablemate. Interestingly, it also frequently out-sells the conventional Clio supermini it's based on, specifically the fundamentals here being borrowed from the Continental MK4 Clio Sports Tourer Estate that's never been offered in our market. The styling's certainly a great deal more eye-catching than any Clio, especially at the front where on this facelifted model, C-shaped LED lights feature as part of headlamp clusters that original buyers could specify to incorporate full-LED 'Pure Vision' beams. Behind the wheel, you get the all-important raised seating set-up that Crossover buyers like so much, the Captur positioning you 10cm higher than you would be in the Clio supermini it's based upon. Look around and if you happen to be familiar with this car in its original form, you should notice the classier ambiance of this facelifted model with upgraded materials and better standards of fit and finish from the Spanish factory. For this facelift, Renault focused on the areas you more frequently touch and interact with, hence the smarter steering wheel, the higher quality dash plastics, the revised gearstick and the re-styled door panels which feature a more intuitive switchgear layout. The dash features an overtly confident chrome-surrounded instrument cluster dominated by the kind of digital speedo that not everyone will like. Equally eye-catching, if specified, is the consumer electronic-fest that dominates the silver and gloss black-trimmed centre console in the form of a tablet-like display that is the 7-inch 'R-Link' colour touchscreen. Inside, the stretching that's taken place on the Clio supermini platform has released enough space to make the back seat pretty much as roomy as it would be in a Focus-sized family hatch. All variants get a pretty unique feature in this class, a sliding rear bench that moves backwards or forwards by up to 160mm (though only as one unit), enabling you to prioritise either legroom or boot space. The position of this bench is obviously going to make a big difference to the amount of space you get in the boot. Raise the rear hatch when the back seat is set for maximum legroom and there's a 377-litre capacity on offer - 77-litres more than you'd get in a Clio and about the same as you'd find in a Golf family hatch. Position the seat to completely prioritise luggage space though and much more room can be freed up. Push forward the 60/40 split-folding rear seat and you'll find that it doesn't quite lie fully flat but in this position, you do get access to up to 1,235-litres of total fresh air if you load to the roof.

Most Captur owners we came across were pretty satisfied, but inevitably, some issues were thrown up by our survey. We came across a number of glitches with the R-Link2 infotainment and sat nav system - things like out-of-date maps and issues with DAB drop-out. examine for flaking of paint on the bumpers and check that the air conditioning works and that the pixels on the centre display are all good. Also check for rear bumper scrapes. Also check that the Bluetooth pairs reliably with your phone handset. Whatever variant you're looking at, check tyres, exhausts and front suspension alignment carefully and try to establish if the previous keeper was diligent in the car's upkeep. Look for parking scratches on the alloys and evidence of child damage on the interior plastics and upholstery. All of these issues are common and could give you scope for price negotiation.

Very little was changed with regard to the driving experience of this improved Captur but Renault argued that very little needed to. To some extent, we'd agree with that. Thanks to an 'understeer control' system and 'Roll Movement Intervention' technology, this Renault handles the bends quite eagerly. Not so good is the rather firm suspension set-up, which crashes over larger bumps but does more comfortably settle down on faster flowing roads. As before, almost all customers will choose a 90bhp model - ether the three cylinder 0.9-litre TCe 90 petrol unit or the popular 1.5-litre dCi 90 diesel, available in this facelifted model with the option of EDC auto transmission if you want it. Those needing something peppier are offered manual or automatic versions of a four cylinder TCe 120 petrol derivative. Or the manual-only 1.5-litre dCi 110 variant. As with most Crossovers of this kind, there's no 4WD option (the Captur's platform wasn't engineered to take it), but further up the range, there was a 'Signature X' variant that offered more capable 'Mud & Snow' tyres and a 'GripXtend' traction control system so that you can get the best from them.

Passionate and practical, the Captur remains an endearing thing. Of course, there's always a danger with this class of car that in its mix of SUV, MPV and family hatch, you end up with a confection lacking the core strengths inherent in any of these three genres. Broadly speaking though, this is a trap Renault avoided here - provided your expectations in each of these areas aren't too great. It doesn't have 4WD, you can only just carry five people and you won't want to drive it on its door handles. None of which will bother most buyers at the smaller end of the Crossover segment one jot. Otherwise, there's not much to complain about within the limitations common to the many SUVs of this kind now filling our roads. This is in short, still a very clever Crossover. And if you really want a car of this kind, then you'll really want to try it. 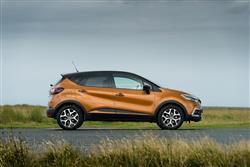 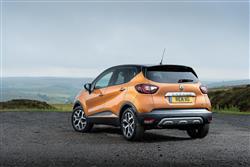 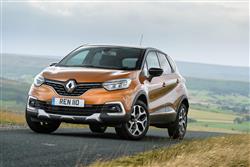 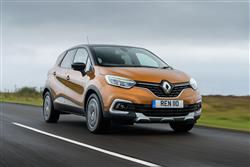 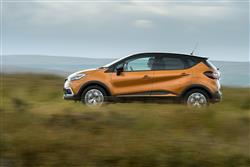 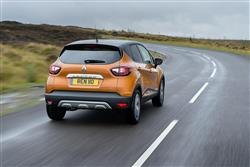