The Renault Captur sits in a crowded market of compact crossover vehicles such as the Nissan Juke and the Peugeot 2008, but brings with it some genuinely clever interior touches and no small dose of style. This current version offers a smart look, a well finished interior and plenty of safety technology. As before, some super-economical engines also feature, particularly the dCi 90 diesel unit featured here. Expect the Captur to attract the sort of buyer who likes the way the Nissan Juke drives but who would prefer a bit of extra versatility.

Aside from its electric vehicle development, modern Renault is not a company steeped in innovation - and there's a reason for that. Often, when it 's tried something genuinely innovative, the result has often proven to be a commercial disaster. Think Safrane, Avantime, Vel Satis, Clio V6 and so forth. Where Renault really does tend to strike gold is by taking existing vehicle genres, then refining them and adding style and ability. The company's Renaultsport hot hatches are one example of this. Their award-winning MPVs are another. In both cases, the French brand borrowed from other companies' pioneering ideas but packaged the products so well they became bywords for excellence in their segments. It's done the same with the Captur, a small crossover vehicle that's spun off the same Clio-derived chassis that underpins its partner, Nissan's big-selling Juke. This Renault was launched in 2013, then updated in 2017. It will continue to be a strong seller in the dCi 90 diesel form we're featuring in this test.

The Captur's pedigree can't really be questioned. Its underpinnings and engine choices are well proven, none more so than the Energy dCi 90 1.5-litre diesel engine in the variant we're looking at here. In a comparable Nissan Juke, this same unit puts out another 20bhp, but most buyers won't really notice the lack of those extra braked horses, given perfectly adequate performance figures here of rest to 62mph in around 13s on the way to a top speed of 106mph. Don't get any designs on off-roading though. The Captur's not really into all that. You only need to look at how snugly the wheels fit into the arches to figure that out. There's no 4WD option and there won't be for the platform this car rides upon hasn't been designed to take it. In compensation, we'd expected that the engineers behind this car might have added in the kind of 'grip control' system you'd find on something like a Peugeot 2008 so that you can maximise front wheel traction on slippery surfaces. But Renault hasn't bothered with that either, instead equipping it with something that'll probably be of much more use on poor surfaces: decent ground clearance. With 200mm of ride height (the Peugeot, in contrast, has only 165mm), you'd be able to get a surprisingly long way on muddy tracks in this car if you equipped it with a proper set of winter tyres.

The Captur's nothing like as divisive as its cousin, the Nissan Juke. In fact it's a very clean design with some very slick detailing. Renault calls it an 'urban crossover with an unpretentious look' and that's pretty much spot on. Its footprint is small at just 4.12m long and 1.77m wide, while the 200mm ground clearance gives it a nicely elevated driving position. The styling's certainly a great deal more eye-catching than that of the Clio supermini this model's based upon, especially at the front where these days, C-shaped LED lights feature as part of headlamp clusters that can be specified to incorporate full-LED 'Pure Vision' beams. Behind the wheel, you get the all-important raised seating set-up that Crossover buyers like so much, the Captur positioning you 10cm higher than you would be in the Clio supermini it's based upon. Look around and if you happen to be familiar with this car in its original form, you should notice a classier ambiance with upgraded materials and, we reckon, better standards of fit and finish from the Spanish factory. In the back, the stretching that's taken place on the Clio supermini platform has released enough space to make the back seat pretty much as roomy as it would be in a Focus-sized family hatch. All variants get a pretty unique feature in this class, a sliding rear bench that moves backwards or forwards by up to 160mm (though only as one unit), enabling you to prioritise either legroom or bootspace. Out back, there's a 377-litre boot, exendable to as much as 455-litres if you push the bench forward.

A diesel Captur will cost you around £1,600 more than a petrol one - which means prices for the dCi 90 variant starting from around £17,000. There are three trim levels - 'Play', 'Iconic' and 'GT Line'. One trend that Renault has certainly signed up to with this car is that of personalisation. MINI really got the ball rolling with this one and Fiat's 500 and Citroen's DS3 quickly jumped on board. In the same vein, and the Captur features some interesting ways to minimalise the chances of ever seeing a vehicle identical to yours on the roads. Equipment-wise, virtually all models get air conditioning and front foglights. And absolutely all of them get alloy wheels, daytime running lights, cruise control with a speed limiter, a trip computer, a height-adjustable driver's seat, power front windows and mirrors, Bluetooth 'phone compatibility, a decent quality USB and AUX-in-compatible CD stereo with fingertip control, plus Hill Start Assist to stop you from drifting backwards on uphill junctions. Popular options include the R-Link infotainment system with its downloadable apps. And removable, zip-fastened seat covers.

To reduce running costs, the Captur benefits from efforts Renault has invested in weight reduction, aerodynamics and high efficiency tyres. Its weight is the same as that of a Clio supermini, even though it has a larger footprint. Whenever the cooling requirement reduces, powered flaps behind the bumper automatically close off the air intakes, reducing drag. Meanwhile, ducting inside the engine compartment channels the flow of air, again improving aerodynamic performance. Last but not least, ultra-low rolling resistance tyres reduce fuel consumption by up to three per cent. As a driver, you can do your part too if you keep an eye on the gearshift indicator light and also use the so-called 'Driving Style indicator' that's offered on models fitted with the R-Link multimedia system. It's based around a light in the instrument display that aims to provide real-time feedback on the way you're driving based on your speed, gearshifts and deceleration. Green, yellow or orange lights with varying levels of brightness help adapt your driving style. And you can even analyse it all via an 'eco2' function in the R-Link system that can produce efficiency 'Trip reports' on each journey, can compare the efficiency of journeys conducted on the same route and even offers so-called 'Eco-coaching' with personalised driving tips. Get it all right and you'll be looking at 67.3mpg and 110g/km from the dCi 90 engine in the Captur variant we're looking at here.

The success of the Renault Captur might well be best summed up by a friend of mine who test drove a Nissan Juke, liked it and then showed a photo of it to his wife who nixed the idea on the spot because of the way the car looked. The Renault shares many of the Juke's attributes but it's wrapped in a shape that's a good deal less divisive and also features an interior that's a lot smarter. I'd have liked to have seen an all-wheel drive version with a diesel engine but that doesn't seem to be in Renault's plans and even with drive just going to the front wheels, the Captur is a fun and appealing thing with a wholesomely practical side too. Cheeky, versatile and cost-effective in dCi 90 diesel form, with smart engine tech and a stylish interior, this Renault will continue to put quite a few of its immediate rivals in a tight spot. 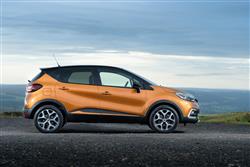 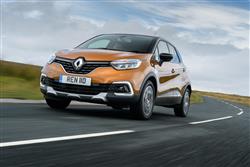 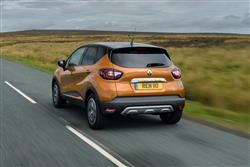 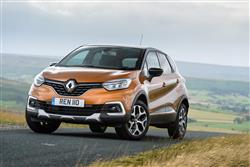 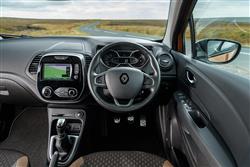